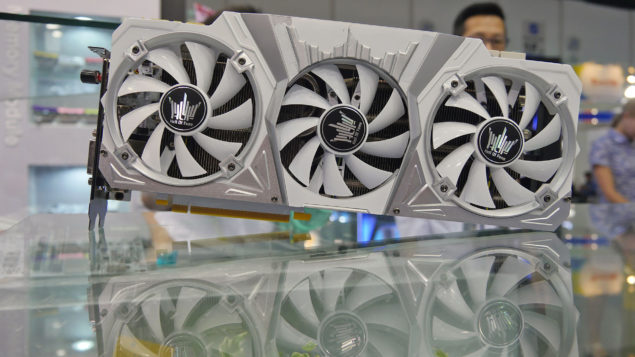 Galax overclocks GTX 1080 surpassing the 2Ghz mark on air as well as LN2. NordicHardware had the opportunity to interview one of a country top overclocker,  Mr. Mad Tse from Hong Kong.  We know him under the nickname of Mad222 at Hwbot.org and his international achievements in worldwide competitions as MOA orGOOC. Mad Tse was showcasing the capabilities of custom designed GeForce GTX 1080 HOF at GALAX booth during Computex.

Mad Tse had many things to say about the card. Mad marked that the 8-pin power connector was not a limiting factor in his OC session with this card. These are reference boards – different from custom designed boards as different components are used in the reference models. Also, they are most likely to have a locked BIOS. He also mentions that his card was using increased voltage up to 1.3V, which is not possible on reference cards.

The 2.5 GHz clock achieved, using LN2 cooling is already impressive, it’s not really as important as the clock achieved using air-cooling only. GALAX HOF GTX 1080 is supposed to reach the 2.2GHz mark without any extra aid.

However, it is uncertain if NVIDIA approved this card design and its unlocked BIOS, so we don’t know if retail cards will be able to achieve similar frequencies out of the box .

We have the whole interview down below, (Main part is in English) :

GALAX Overclocks GTX 1080 ! What are your thoughts on this? Where does the HOF cards stack up according to you? Let us know in the comments.