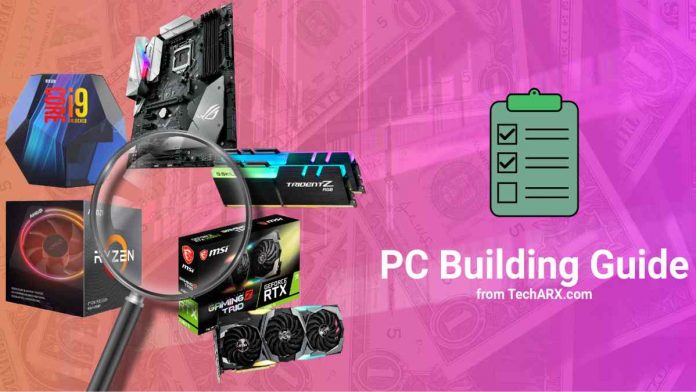 The tech industry, specifically the PC industry is on its all-time high in terms of the launch of new components, with components arriving at quite a quick rate. As the title suggests, we’ll be listing parts of a gaming PC for roughly ₹80,000 with this article. This build is expected to game at 1080p ultra and decent 1440p gaming as well. Without any further ado, let’s jump right into it.

Ryzen 5 3600 packs 6 cores and 12 threads, making the CPU capable of Simultaneous multithreading or SMT and is based on Zen2 architecture. The processor has a base frequency of 3.6 GHz and boosts up to 4.2ghz out of the box. The CPU has an unlocked multiplier, so overclocking is possible. The CPU has 32MB of L3 cache and a TDP of 65w.

Multitasking is a no brainer on this CPU as it handles workloads like a charm. This CPU is capable of handling some higher tier GPUs as well without much bottlenecks. This CPU belongs to the 3rd generation of Ryzen and holds up quite good. And the platform it is based on is future proof as well.

Super Twin X2 in specific has a twin cooler design and comes with a factory overclock, meaning it has higher clock speeds out of the box compared to its counterparts. This 2060 super has enough horsepower to drive any game at ultra on 1080p resolution and pull out more than 60 FPS most of the time without struggling, and play games on 1440p resolution at decent settings. Since it belongs to the RTX lineup, it supports real-time ray tracing as well.

Note: Since the GPUs from AMD’s side, like the RX 5700, now have a lot of failures and driver issues reported, it is hard to recommend them. But if you still wish to go with the same, you can opt for RX 5700 which has a similar price tag.

Ryzen CPUs are proven to have a benefit in certain workloads if paired with high speed and low latency memory modules. The memory option we have chosen is a total of 16GB of DDR4 running 3200 MHz CL16 in dual channel configuration. The minimum recommended memory configuration nowadays is 8×2, that is, 16GB in total.

Games nowadays utilize around 12GB of memory. Needless to say, 16GB provides a little headroom as well. Also, these sticks have RGB and an aesthetically pleasing design, adding up in the aesthetics sector of the build.

The motherboard we chose is a well-reputed offering from AsRock. The motherboard has 2 PCIe 3.0 x16, 4 PCIe 2.0 x1 slots, and supports DDR4 3533+ (OC). This motherboard offers a decent amount of power delivery for light overclocking. The motherboard offers a very comprehensive control to perform the built-in RGB LEDs or the connected LED strips, CPU fans, coolers, chassis, and any RGB devices smoothly. Devices can be synchronized across the Polychrome RGB Sync-certified accessories as well.

Note:  If you can spend Rs. 3000 more on the motherboard, you can opt for MSI Tomahawk MAX B450 motherboard, which is one of the most robust B450 options in the market, and all the motherboards from MAX series are Ryzen 3000 series compatible, and hence won’t require a BIOS update.

GAMMAXX GTE has emerged as one of the most highly recommended CPU coolers for its excellent heat dissipation performance. It has 4 sintered metal powder heatpipes directly contacting the CPU surface. It comes with a 120mm RGB LED fan.

SSDs are an integral part of PCs nowadays and having one in your system helps. Boot times are quicker compared to HDDs if the operating system is loaded on an SSD. A 240gb capacity is enough to load an operating system and a bunch of games or applications.

The 240GB SSD is not enough for 2020 needs and hence a mass storage option is still required, to avoid running into potential storage capacity issues. The HDD we chose is Seagate 1TB Barracuda 7200 RPM. The HDD can be used to store large files and games on it.

This power supply unit from Antec is a 650w 80+ bronze unit. The PSU is Semi-Modular, and hence would help in eliminating any useless wires except the 24 pin power connector. A 650w PSU is enough to power such a build. And since it is an 80+ bronze-rated unit, it is highly efficient.

The cabinet belongs to the NX series from Antec. It supports up to 8 120mm fans and comes with a dust filter on top and at the bottom. This cabinet supports up to 280mm radiator in front and 120 at the rear. It comes with 1 ARGB 120mm fan pre-installed.

The prices are an estimate of what you are expected to find online from various sites. You can always search for the same in offline markets to find cheaper prices.

The cost of peripherals like monitor, speakers, keyboard-mouse etc.are not included in this one considering the article is focused entirely on the PC. Also, the amount of Windows 10 is not included. You can obtain the activation key for as low as Rs. 500. The build is capable of handling gaming and light workloads. Please do drop a comment in case you have any suggestions.

Most FPS PC Build for Holiday 2017