Not more than 2 days ago, nVidia officially unveiled its upcoming mainstream GPU for the masses – the 1060, which will retail at prices of $249 for the custom variants and $299 for the Founder’s Edition. Following the affirmation, industry giants viz. Asus, Inno3d and Gigabyte have ventured out and teased the aftermarket / custom variants for the 1060. You can get a check into the GTX 1060’s specs and additional details here. The GTX 1060 will hit the shelves across the globe on 19th July, 2016.

A few hours after nVidia’s official unveil. Asus revealed a trio of aftermarket 1060s on their facebook page. Unfortunately, there was no mention of the specs and the reveal was capped at images of the upcoming GPUs. The tease was fairly patent of what we can expect in the future though, as the image included a trio of Asus’ most popular GPU variants namely, The Asus ROG Strix, Turbo and Dual GPUs featuring a triple, single and dual fan configuration respectively. The ROG card appears similar to Asus’ RX 480’s aftermarket variants. 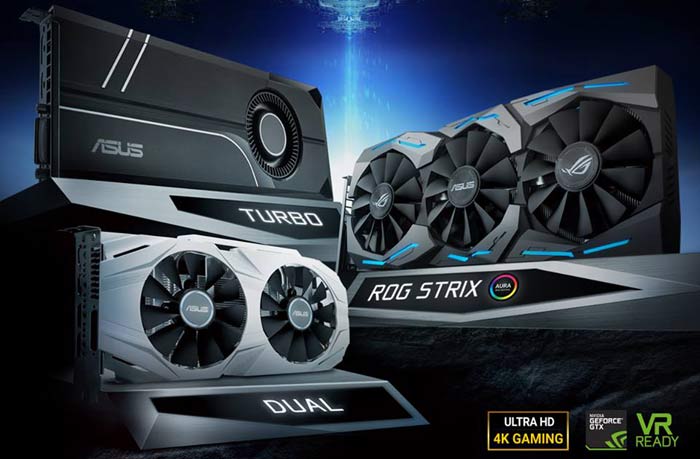 Inno3D of all the board partners was the most thorough one as it didn’t just put breaks with the tease. Instead, they went on to detail the specs of the upcoming GPU :-

Inno3D sent Hexus a press release concerning its upcoming offerings which included the GeForce GTX 1060 Gaming OC X2 and GeForce GTX 1060 iChiLL X3. More images for the graphics cards can be found here (OC X2, iChill X3). The GeForce GTX 1060 iChill X3 features a triple fan cooler which would warrant superior thermal performance over its comrade the GTX 1060 OC X2, offering a much higher overclocking threshold to end users owing to the presence of the sleek, stylish and beefy cooler. However, the base specs for the both the variants are same.

Gigabyte has released a press release on their official website teasing their upcoming GeForce GTX 1060 G1 Gaming Super Overclocked GPUs, featuring RGB illumination. The term ‘Super Overclocked’ is an ambiguous one and so far, we haven’t received any real world numbers regarding the same. This could however indicate that the consumers and enthusiasts will be furnished with a high overclocking threshold due to the presence of the WINDFORCE 2x technology that flaunts dual 90mm coolers, 2 composite copper heat pipes in direct contact with the Graphics processor equipped with semi-passive operation. The card also consists of an RGB fan operation indicator embedded into the visible side. Gigabyte proudly speaks of its “GPU Gauntlet Sorting technology, pushing overclocking capability to the limit without compromising the system reliability”. Furthermore, the card will feature a 6+1 power phase design that would allow for even higher overclocks coupled with one click overclocking via the XTREME Engine.