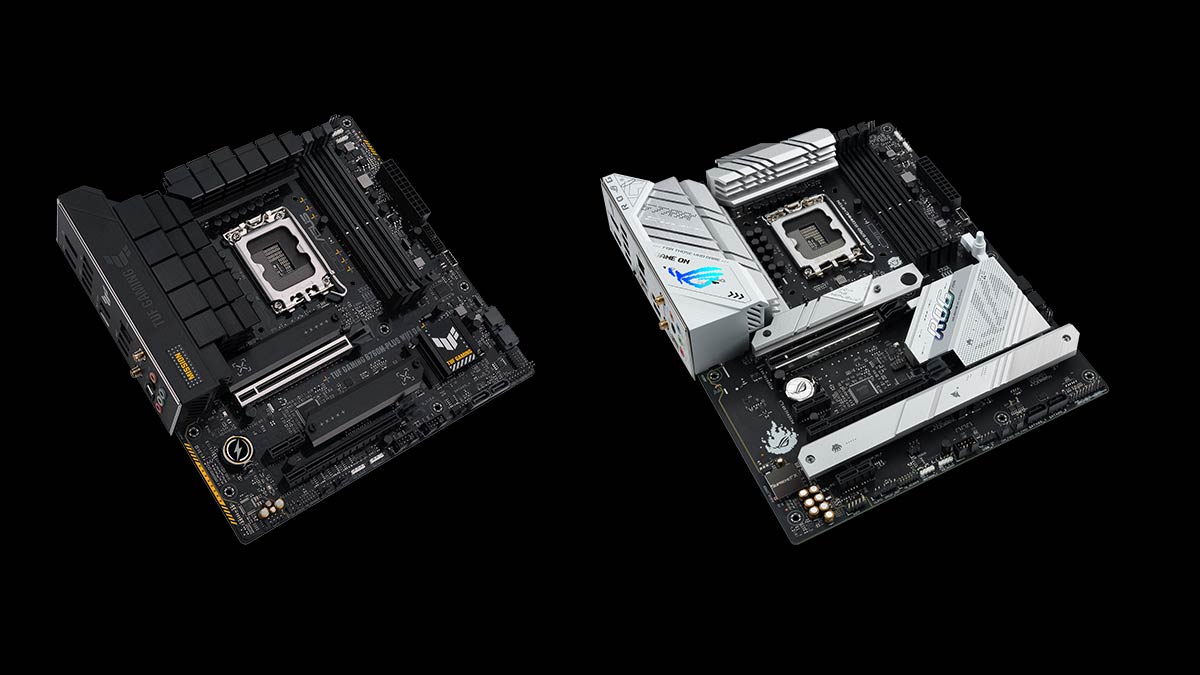 ASUS today announced numerous new motherboards for Intel® 12th Gen and 13th Gen processors. In 2022, ASUS launched a cutting-edge Z790 motherboard platform. Built to handle the most potent 13th Gen Intel® Core™ CPUs, these boards serve the needs of PC enthusiasts, extreme overclockers, demanding gamers and professional creators alike. Today, ASUS is expanding the motherboard family with new Z790 models and several more options that feature the H770 and B760 chipsets. These bring the latest Intel chips to a wider audience than ever before. At the high end, ASUS is taking the wraps off the new ROG Strix and ASUS Prime Z790 motherboards, and it is also helping everyday builders move beyond boundaries with a wide selection of H770 and B760 motherboards from the ROG Strix, TUF Gaming, ProArt and Prime product families.

New ways to beat the heat

Alongside new motherboard options, ASUS is also debuting a BIOS feature that gives users an easy way to unleash the power of their new 13th Gen Intel CPU while putting a lid on temperatures. Users of last-gen ASUS boards might be familiar with the ASUS MultiCore Enhancement and ASUS Performance Enhancement features. These BIOS options allowed users with exceptional cooling systems to let their CPU boost beyond stock settings. Now, ASUS is adding a new option to both menus.

As with the existing modes, the new options remove the limits holding back CPU boosting behavior, but they also impose a CPU temperature limit of 90°C. This gives users outstanding multicore performance, but with restrained thermals. Even with the temperature restriction, ASUS MultiCore Enhancement and ASUS Performance Enhancement remain powerful tools for increasing performance. ASUS engineers tested these two MultiCore Enhancement settings with an Intel Core i9-13900K CPU, and they observed that the new setting can reduce CPU temperatures by a full 10°C while offering broadly similar performance. The new mode results in only a 2.8% performance drop compared to the earlier version while offering a significant cooling benefit.

For enthusiasts hunting a beastly, overclocking-ready motherboard, new ASUS Z790 motherboards stand ready. These high-end boards help users build the best home for their overclockable K-series CPU. As the premier options in the ASUS family of Intel motherboards, they are loaded with luxuries for discerning builders. Whether building a no-holds-barred gaming rig, a high-powered content creation PC or an all-around PC ready for any workload, there is an ASUS Z790 motherboard solution on offer. Two new ROG Strix Z790 motherboards are ready to handle any battleground: the ROG Strix Z790-A Gaming WiFi and ROG Strix Z790-H Gaming WiFi. DDR5 support ensures that a CPU has plenty of bandwidth—perfect for the latest chips decked out with a fleet of cores and threads. Both motherboards boast a PCIe® 5.0 x16 slot ready for the best graphics cards of today and tomorrow. Meanwhile, the Prime Z790M-Plus offers a compelling feature set: a PCIe 5.0 x16 slot, three M.2 slots, a header primed and ready to give you a front-panel Thunderbolt 4 port in compatible cases, and much more. And with its timeless black-and-white aesthetic and space-themed detailing, the Prime Z790M-Plus will fit in neatly with just about any component on the market.

The new TUF Gaming H770-Pro WiFi and Prime H770-Plus D4 provide a plentiful supply of PCIe lanes — comparable to what users get in a Z790 motherboard, for those who do not need overclocking to build a rig that meets their needs.

The TUF Gaming H770-Pro WiFi boasts the horsepower and reliable performance needed for gaming rigs. It offers a high-bandwidth PCIe 5.0 x16 slot for a next-gen graphics card, four onboard M.2 slots, and a bevy of USB ports. Seamless networking comes courtesy of an Intel 2.5 Gbps Ethernet port and WiFi 6 connectivity. And ASUS wraps it all up in the signature rugged TUF Gaming aesthetic.

DDR5 is the latest generation of memory, and it offers significant advantages to users of all kinds. But for users tempted by the affordable price tags of DDR4 memory, ASUS offers the Prime H770-Plus D4. With its plentiful PCIe x16 slots and M.2 slots, this motherboard is ready for an array of expansion cards and storage drives.

The ASUS B-series motherboards are all about value. As the most affordable lineup of the ASUS 700-series, these motherboards cater to a wide range of people―such as builders on a budget, people who intend to purchase non-overclockable CPUs, users with more modest performance needs, or anyone who just wants to assemble a reliable, long-lasting PC that does not break the bank.

While ASUS B760 motherboards do not quite go toe-to-toe with the brawny headliners in the cutting-edge ROG Maximus Z790 family, they are feature-rich, high-performance platforms in their own right. Time and again, the ASUS B760 lineup continues to surprise users with features that used to only appear in flagship models. Whether users are looking for a gaming board from the ROG Strix or TUF Gaming families, a creator-focused ProArt model, or an all-around excellent ASUS Prime motherboard, they will find incredible value in the B760 lineup.

Perhaps users are intrigued by the value proposition of ASUS B760 motherboards, but they intend to use their PC primarily for content creation, and they would like their machine to look the part. ASUS invites them to take a look at the ProArt B760-Creator D4. With its PCIe 5.0 x16 slot, ample storage options and broad connectivity, this motherboard gives designers, filmmakers, engineers, and artists of all kinds a robust platform for their projects. Sophisticated finishes and elegant design touches lend the ProArt line an air of classy professionalism that will never feel out of place, whether users are meeting with clients or following their inspiration.

Here is a battle-tested hero born and bred to be the backbone of a build: the ROG Strix B760-F Gaming WiFi. Harboring brash ROG accents across its beefy heatsinks, a pre-mounted I/O shield, and full-coverage M.2 heatsinks, this gaming-first motherboard is ready for center stage. Its robust power solution, impressive power delivery subsystem and comprehensive cooling make it the highest-performance model in the ASUS B760 lineup. DDR5 support unleashes new 13th Gen Intel CPUs with copious memory bandwidth, and a PCIe 5.0 x16 slot paves the way for users to enjoy the brawny horsepower of a cutting-edge graphics card.

ASUS went above and beyond to make building with the ROG Strix B760-F Gaming WiFi a breeze. With its PCIe Slot Q-Release button, users will be able to quickly pop out their graphics card without pinching their fingers. The ASUS M.2 Q-Latch system ensures that users will never lose another tiny M.2 screw into the depths of their case. And should anything go awry in a building process, the Q-LED diagnostic array can ease troubleshooting.

Bolstered by heavy-hitting power delivery subsystems, these motherboards beg for the chance to house a high-end Intel CPU. They offer a trio of M.2 slots for PCIe 4.0 SSDs, and they help users hit high frames-per-second rates with a PCIe 5.0 x16 slot ready for a next-gen graphics card.

If users desire the compactness of a mini-ITX motherboard to suit their needs, ASUS also offers the ROG Strix B760-I Gaming WiFi. Most people could hold this model comfortably in the palm of one hand, yet this board harnesses brute horsepower. Give this motherboard a potent 13th Gen Intel CPU, a pair of high-bandwidth DDR5 sticks, two speedy PCIe 4.0 SSDs and a cutting-edge graphics card in its PCIe 5.0 x16 slot, and you have a high-caliber gaming PC that will go pound-for-pound with today’s consoles and fastest gaming PCs.

TUF Gaming motherboards have earned a reputation among gamers for delivering rock-solid performance and reliable operation at a great price. ASUS is carrying that reputation forward with three new models ready to make PC gaming affordable for a wide audience.

For those who prefer full-size hardware, ASUS offers the TUF Gaming B760-Plus WiFi D4. This ATX motherboard offers what you need for a great gaming rig. With a PCIe 5.0 x16 slot, a WiFi 6 radio and a great selection of USB ports, it is primed for battle. Those who prefer a microATX option may want to consider the TUF Gaming B760M-Plus WiFi D4 or TUF Gaming B760M-Plus D4. All three options support wallet-friendly DDR4 RAM so users can easily get their next gaming rig up and running.

ASUS will also offer ATX and microATX B760 motherboards in the Prime series for all-around builders. Images and more details about specifications for the entire lineup of ASUS Z790, H770, B760 motherboards can be found in the Edge Up Buyer’s Guide and the 700 series landing page.