Anti-Aliasing is one of the most important tool for gamers and photographers when dealing with games and images. To be precise, Anti-Aliasing refers to the technology that removes the sharp pixelized ”staircase” effect in real-time. This article will mostly targeted at gamers in general.

Anti-Aliasing makes your game look way better one pixel at a time by adjusting the contrast and cloning each pixel or a group of them at once according to the design of each Anti-Aliasing method . Anti-Aliasing works in two different ways :

⦁ One of the method is where rendering a scene at a higher resolution and then downsampling it to the specific Resolution.
⦁ And another method is by buffering or smoothing out pixels by adjusting contrasts and color correction methods to make the image look softer (post Anti-Aliasing).
There are different types of Anti-Aliasing which gamers can enjoy. Appropriate selection according to games and graphical fidelity required and hardware specification changes from person to person. So it is important to know as to which type of Anti-Aliasing suits you best. Starting with different types of Aliasing :

⦁ SSAA and FSAA were the so called ”Entry-Fraggers”. Best used on photorealistic images as it makes them looks softer but for sharp images it actually causes them to be blurred out. SSAA has a huge Computational cost and therefore real-time applications like games have moved away from it.
⦁ MSAA is somewhat similar to SSAA but it refers to a specific optimization of SSAA. The specification dictates that the renderer evaluates the fragment program once per pixel, and only “truly” supersample the depth and stencil values.which means that MSAA snipes those pixels. Compared to supersampling, multisample anti-aliasing can provide similar quality at higher performance, or better quality for the same performance.There are 2x, 4x, 8x, and 16x MSAA. Higher results in better quality but can be slower your system.

⦁ CSAA ,created by Nvidia, is supported by the graphics cards newer than the GeForce 8 Series GPUs. CSAA produces anti-aliased images that rival the quality of 8x or 16x MSAA, while introducing only a minimal performance hit over standard (typically 4x) MSAA. In Short, CSAA was made up with the intention to surpass MSAA but to be more of hardware friendly.
⦁ EQAA was introduced by AMD for GPUs newer than HD 6900 series. EQAA was created with the same intention as to why CSAA was made: to surpass MSAA. EQAA did surpass MSAA but consumed the same amount of video memory. 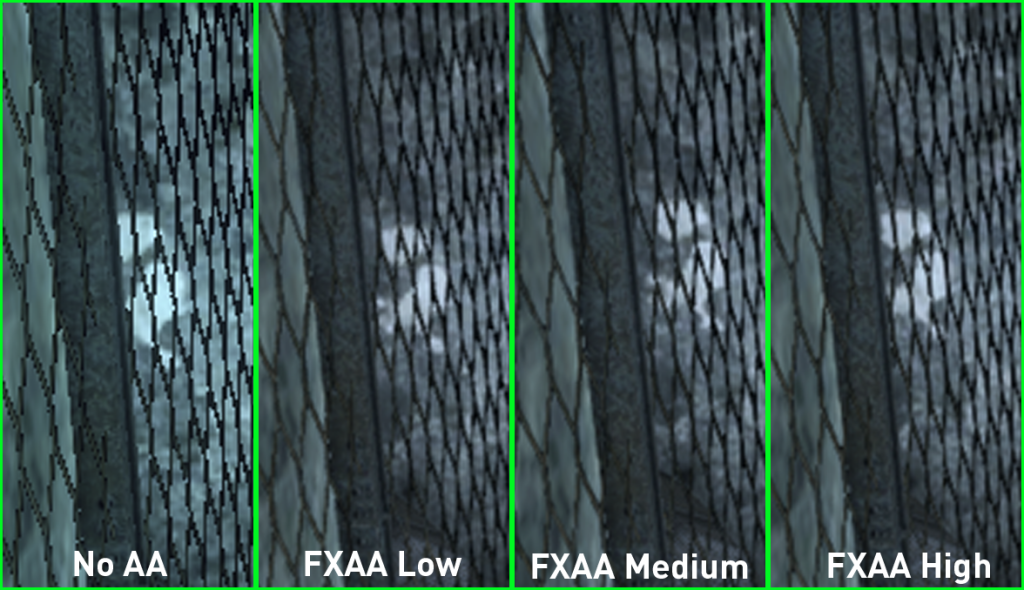 ⦁ FXAA was created by ”Timothy Lottes” under Nvidia with the intentions of following the same path as previous techniques but in a bit twisted way. FXAA consumes less computing power than other conventional Anti-Aliasing methods. One of the advantages was that it smooths edges in all pixels on the screen, including those pixels present inside alpha-blended textures and those resulting from pixel shader effects, which were previously immune to the effects of Multisample Anti-Aliasing i.e MSAA .

Comparison between Non Anti-Aliasing, 4xMSAA, and FXAA. (left to right)

⦁ TXAA , when it made it’s entry in the community, was the honeypot which was obvious as how Nvidia stated it to provide the best visual performance and lower consumption of computing power. TXAA is only available for the Graphics Cards newer than than or equal to GTX 600 series. They explained TXAA was designed to add a more cinematic effect to the games it was applied on. TXAA is more of a mix of a temporal filter, hardware anti–aliasing, and custom CG film–style anti–aliasing resolves.
But wait before you run to your game to try out any of the above mentioned Anti-Aliasing techniques. Not all graphics card support all Anti-Aliasing methods natively. Then what should you do if your graphics card doesn’t supports the anti-aliasing you want ? Custom Anti-Aliasing will be handy in such situations.SMAA is more of a ‘Morphical AA’ which was created by a private dev. SMAA was first applied on Skyrim and since then has become extremely popular with gamers everywhere.

So which Anti-Aliasing do you use? Let us know in the Comment Section.