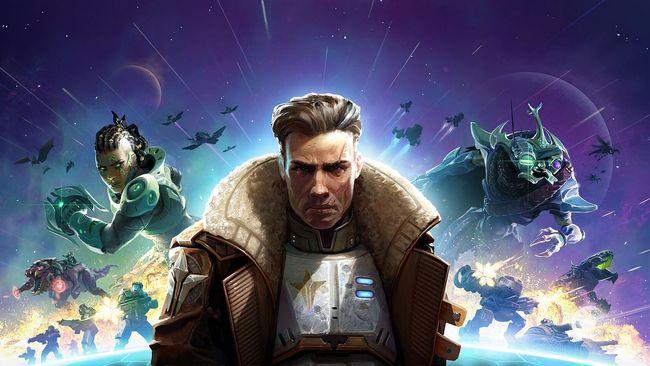 Traditionally a fantasy-based 4X(eXplore, eXpand eXploit and eXterminate) strategy game with a deep turn-based combat system that had you fighting with Orcs, Dragons and Elves, Planetfall takes the franchise into a whole new frontier – space.

Planetfall does a tremendous job of delivering a compelling story, with a well-written story for a strategy game. Through its 13 campaigns, you will come to understand the complex web of interaction and lore that Triumph Studios has masterfully crafted here.

After a mission goes south, a group of the Vanguard faction wakes up from cryosleep to find the Star Union has collapsed, leaving the entire galaxy in ruins and the remnants of civilization are engulfed in a civil war to fill the power vacuum.

There are 6 playable factions in Planetfall. The Vanguard are the standard human faction with their guns, tanks and infantry units straight off the set of Starship Troopers. Amazons are a race of women warriors who ride on the back of genetically engineered dinosaurs.

The Dvar, are space dwarves with a love for blowing things up, they have a powerful area of effect and medium-range attacks.
The Kir’ko are giant space bugs who were once the slaves of Empire. They swarm their enemies and then cut them down with powerful melee units or acid attacks.
The Syndicate were once aristocrats but became slavers after the collapse., their basic troops are indentured slaves forced into military service to pay off their debts. They have superior stealth capabilities and covert operations.
Finally, the Assembly are biomechanical beings who can rebuild or revive their own members by using bits and pieces of fallen troops.

There are also a number of independent factions that are unplayable but can be allied for bonuses and additional units or wiped out for XP and resources.

The 6 factions have a dozen or so unique units and their own technology tree, with distinctive and meaningful choices. Operations replace the magic spells from the past games. There are giant space lasers, biological weapons, psionic attacks and other tools to help you gain the advantage.
There is an issue here, however, and that is the enormous amount of information that is presented to you. All of those tooltips and technical jargon being thrown at you can seem daunting at times but after a couple of games with a particular faction, you will know which way to go. Still, I feel the tree could have been streamlined a bit to ease newcomers into the game.

Heroes also make a return in the form of commanders, and you can once again create your own custom Commander who will act as your Avatar in the main campaign and in the skirmish maps. You can choose their equipment and secret technology as well as other traits to give them a touch of personality. There are some light RPG elements here as well, as you can influence how other NPCs view your faction, as a source of friendship and trade or a warmonger. You can also level your hero up and unlock new skills and equipment.

Each faction plays out differently and has different tactics and strategies. They also have very fleshed out lore with interconnected stories that explain the prejudice they have for each other. Triumph has succeeded in making each faction distinctive and interesting without resorting to too many stereotypes that we have come to expect from the sci-fi genre.

On the campaign map, Planetfall still follows the classic 4X turn-based formula, but with some unique gameplay elements. Empire management and the base building have been overhauled with more options, and neighboring sectors can be annexed and used to produce specific bonuses.

The entire map is divided into different lands, buildings and resources, which have different strategical benefits and expansion must be done with careful planning you need to spend a part of your population to take control of a sector. Spend on the wrong sector and you might find your opponents taking control of a critical sector and starving your empire of resources. Minor factions are dotted around the map and offer specific missions and additional units to recruit, similar to AOW 3.

Diplomacy is also present but suffers from backstabbing and unpredictable AI, the options are also shallow and could have used an overhaul similar to the other gameplay systems. The newly added Casus Belli system, for example, can result in sudden hostilities and feels tacked on instead of being a fully fleshed-out feature.

The other main part of the game is the combat, and boy does Planetfall nail this down. Units can take cover, flank and provide overwatch. Each race has units that play out vastly different from each other and therefore you need to keep adapting and outmaneuvering your opponents. The AI also does a commendable job in keeping fights challenging without turning things too boring or frustrating.

Units can also be modified with mods and turned into a new variation with various bonuses or specialties. You can mod your units to build synergy within your troops and create a perfect composition of troops. This added layer of strategy however also presents another challenge for newcomers, just like the tech tree does, the huge number of mods means there is a ton of possible combinations that you can go with leading to a lot of complexity in a game that already has more layers than it needs.

Units are also subdivided into specialized units, such as support units that can heal other units or scout units that can be used for recon. Every unit has unique abilities and stats, and most of their stats are also influenced by morale. Operations can also be used in combat to gain an advantage, but require time to prime and have a cooldown.

Visually the game is gorgeous with sharp and well-detailed textures. Every one of the units in the varied faction roster is designed with an attention to detail, and do a fantastic job in portraying the core styles of the faction they belong to. The campaign map is littered with small clutter, flora, fauna, and buildings that add a level of immersion and adventure to the game, which is very important as you will be staring at the same map for hours upon hours. The UI, on the other hand, can get a bit distracting and messy with important information hidden behind way too many clicks.

Under the hood, Planetfall has the standard options for setting the texture quality, shadow quality, SSAO quality, anti-aliasing, soft particles, bloom, and reflection.

Performance-wise, we tested the game out on a 1060, 2070 and our old 260x(a similar card to the fan-favorite 750TI), Ryzen 2600x and 16 GB of RAM. The game ran without any hiccups on ultra for both the 1060 and 2070 on 1080P and 1440P, easily managing to hit 60 FPS all the time, while the 260x struggled on ultra even on 1080P but managed fine on a mixture of high and medium settings. On 4k, the 1060 stuttered a bit here and there but the 2070 managed a stable 60 FPS, unfortunately, the 260x could barely handle 30 FPS even with a mixture of low and medium due to the limited VRAM. Overall, the game is very well optimized and will run on almost anything as long as you are willing to compromise a bit on the settings.