WWE 2K16 is the newest video game in the WWE 2k series. First of all, I need to say that WWE 2K16 is way bigger than 2K15 in all the categories. The roster is massive, almost double the size of last year’s 2K15 with over 130 characters that are playable excluding the upcoming downloadable contents.

Some of the wrestlers have different avatars of themselves, for example, players can select between the 3 different Stings avatar which we have witnessed throughout his legendary career. There are altogether 13 divas in total in the roster with Divas like Lita or Trish Stratus to be added in the upcoming DLC. 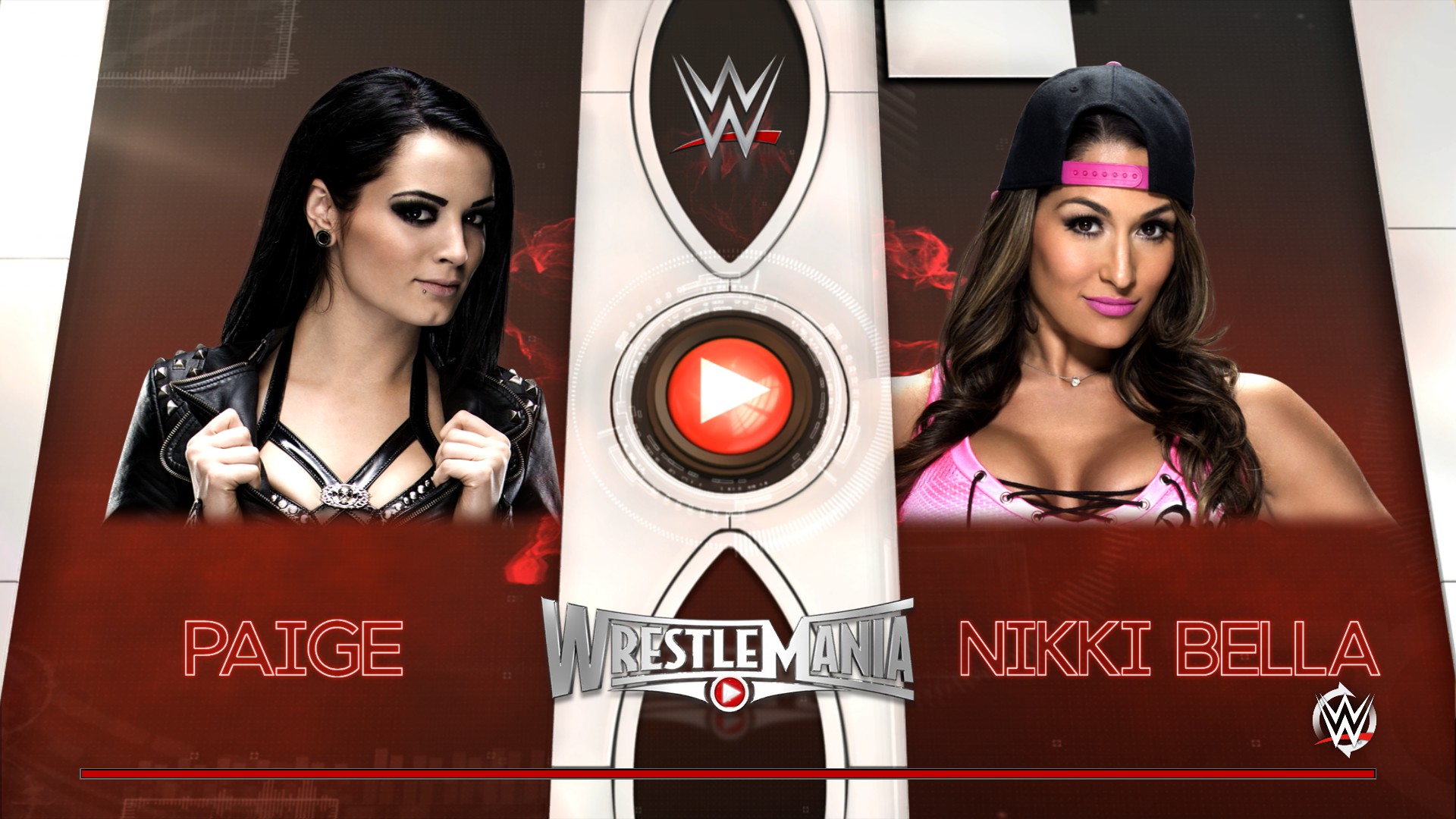 When it comes to character design, WWE 2K16 is a bit of a mixed bag, some legacy characters seems way off and some of them do not have any emotion in them, just blank plastic faces starting back at you. Same goes with the crowds. The crowds are generic and have little improvement over the last gen titles.But some of the characters are wonderfully done, Stone Cold, The Undertaker, Cena and Randy Orton are really well done and look like their real life counterparts.

Let us talk about the gameplay now. Chain wrestling makes its return.  The new reversal limit is the biggest change in 2k16. A fixed number of reversals are  assigned to each wrestler in the game, making the player choose between which moves to counter and when to take a blow. Now while this solves the infinite reversal problem that plagued the series, it suffers from extremely frustrating reversal controls – you have to be careful with your timing but a lot of times it just wouldn’t register the reversal resulting in the opponent using up his finishing move and ending the match real quick. 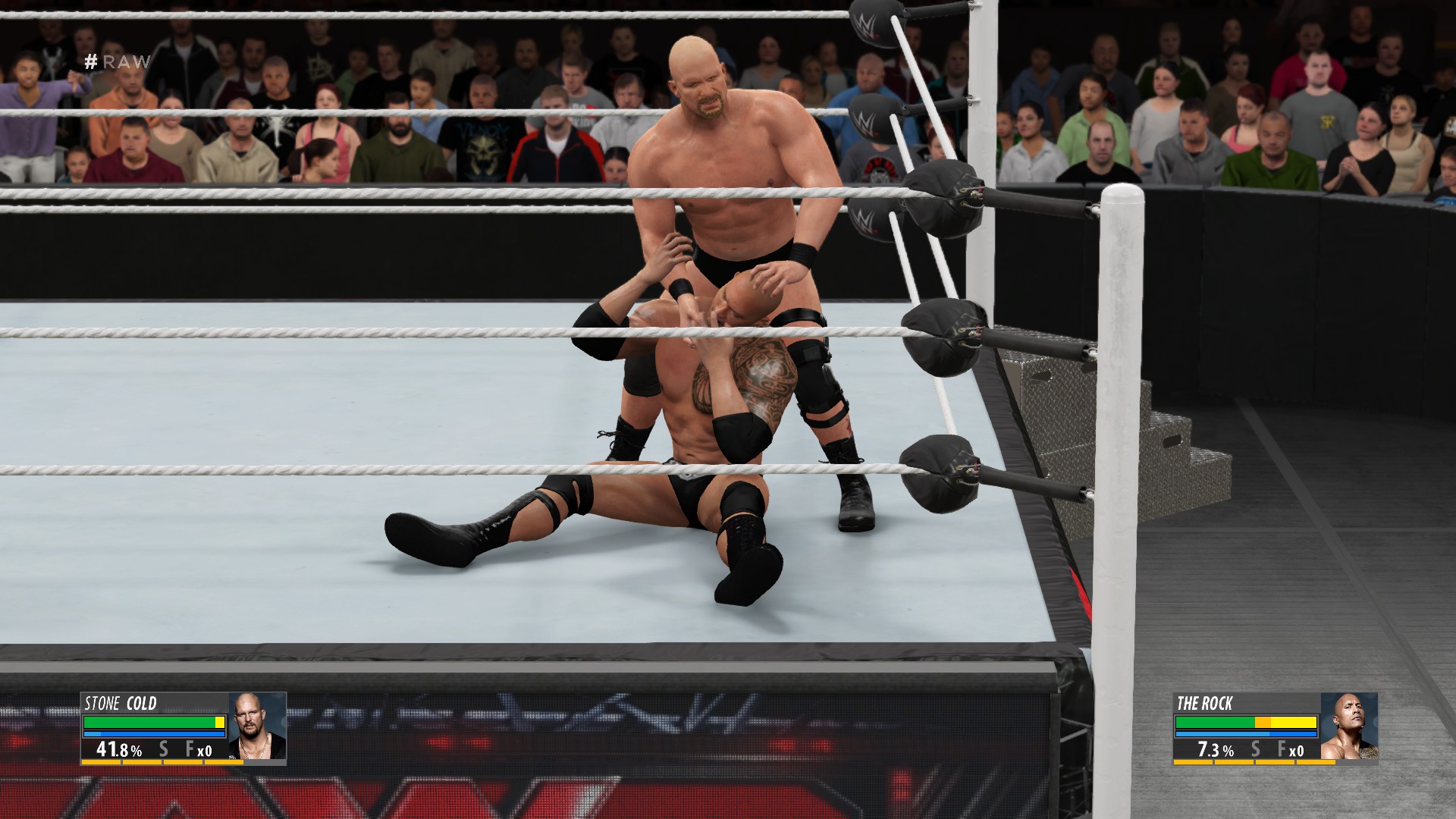 The wonky hit detection system still remains, sometimes the hits register sometimes it doesn’t. In a game like WWE where timing is everything this is really bad, often my wrestler would suddenly start punching the air just when I had cornered my opponent. The amount of moves available has also been reduced resulting in a more simplified combat system.  Going for grapples on grounded opponents just leads to butter fingers where they can’t seem to get a grip of anything. Character’s bodies falling awkwardly after moves is another odd sight, but none are more infuriating than the statuesque pose when a recovering character gets up halfway and then stays there for an undetermined amount of time.

Characters entrances look great and are very cool to watch and you can actually break out and attack your opponents. 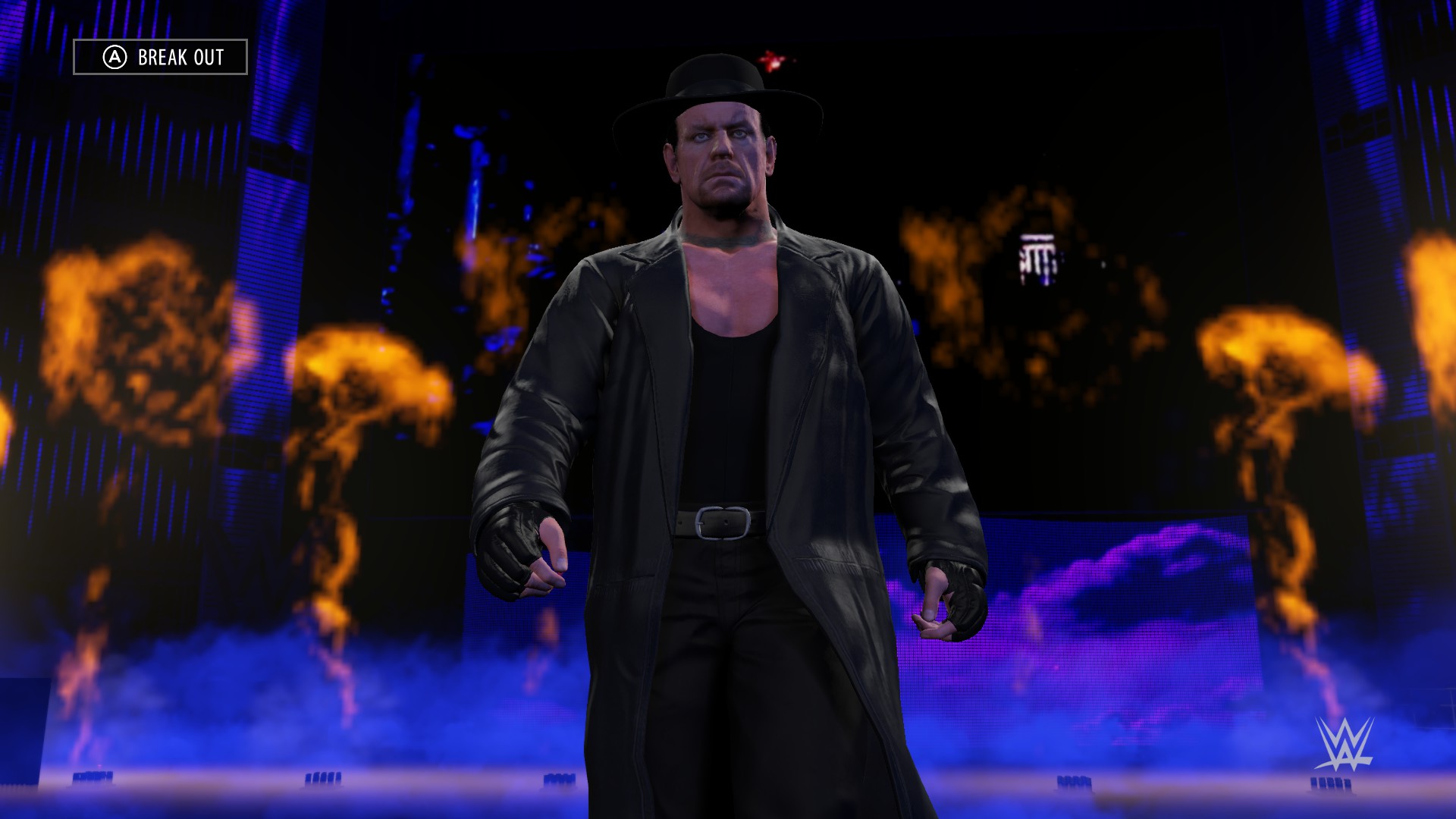 The most confusing thing that I came across in the gameplay is the submission mechanism. When you catch an opponent in your submission hold, a circular bar will pop up in your screen. Your objective will be to overlap the bar over the opponent’s. The opponent’s objective will be to fill the gauge in order to free himself from your grasp. But if only it was that easy, the AI seems to always have an advantage in this, resulting in a frustrating game of chase/escape . This mechanism will be the most confusing thing for most new players. Even when I got the hang of it, it still felt unsatisfying.  2K15’s submission mechanism was far better and easier to control.

Most of the gameplay systems are customizable. There is a slider to determine how many times the AI reverses your finisher. There is also a slider for your stamina meter. Finishing moves are weak. Blood is turned off by default, but I recommend turning it on as soon as you enter the game because when you get witness Austin’s 2K showcase where he bled in real life, it will be awkward for you. 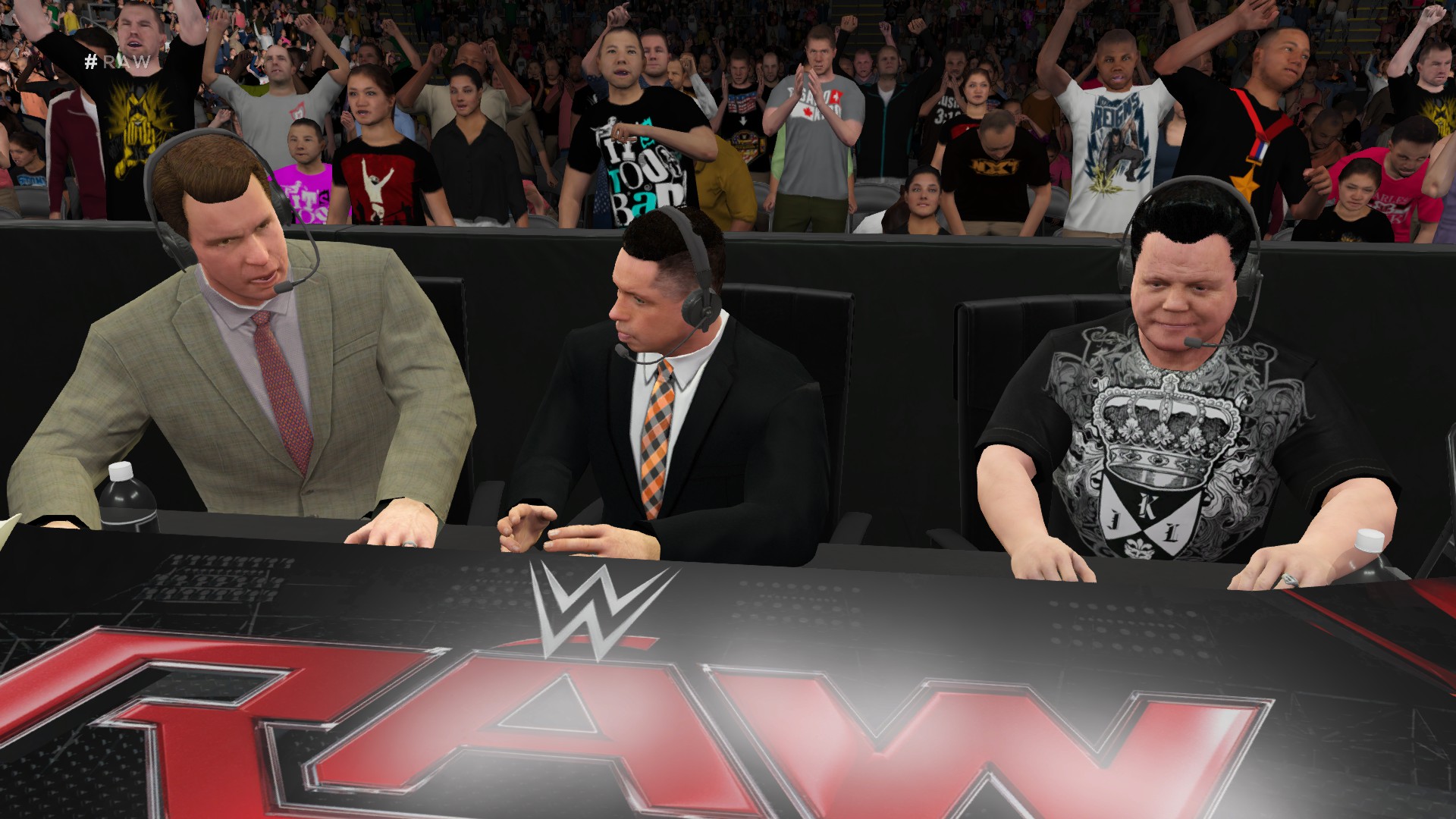 Normal matches are called by Michael Cole, Jerry Lawler and WWE Hall of Famer John “Bradshaw” Layfield. Johnny Bradshaw Layfield is the new entry in the WWE 2K series video game. The commentary isn’t really the best and won’t make you feel like you’re watching the real thing, but it gets the job done. The character models, however, are terrible.

My Career has been hugely improved from the last time.  After each match, you will have to take part in interviews with WWE broadcaster, Renee Young. You can choose dialogues that will affect your personality. The character customization has improved a lot and you can create wild new characters to your liking, there’s a lot of options to choose from and you can also put your own face on the character. Community creations can also be downloaded and some of the talented players out there have managed to create some truly amazing characters.  It’s pretty clear immediately that there’s been an extra effort in moulding this mode into what the fans actually wanted. 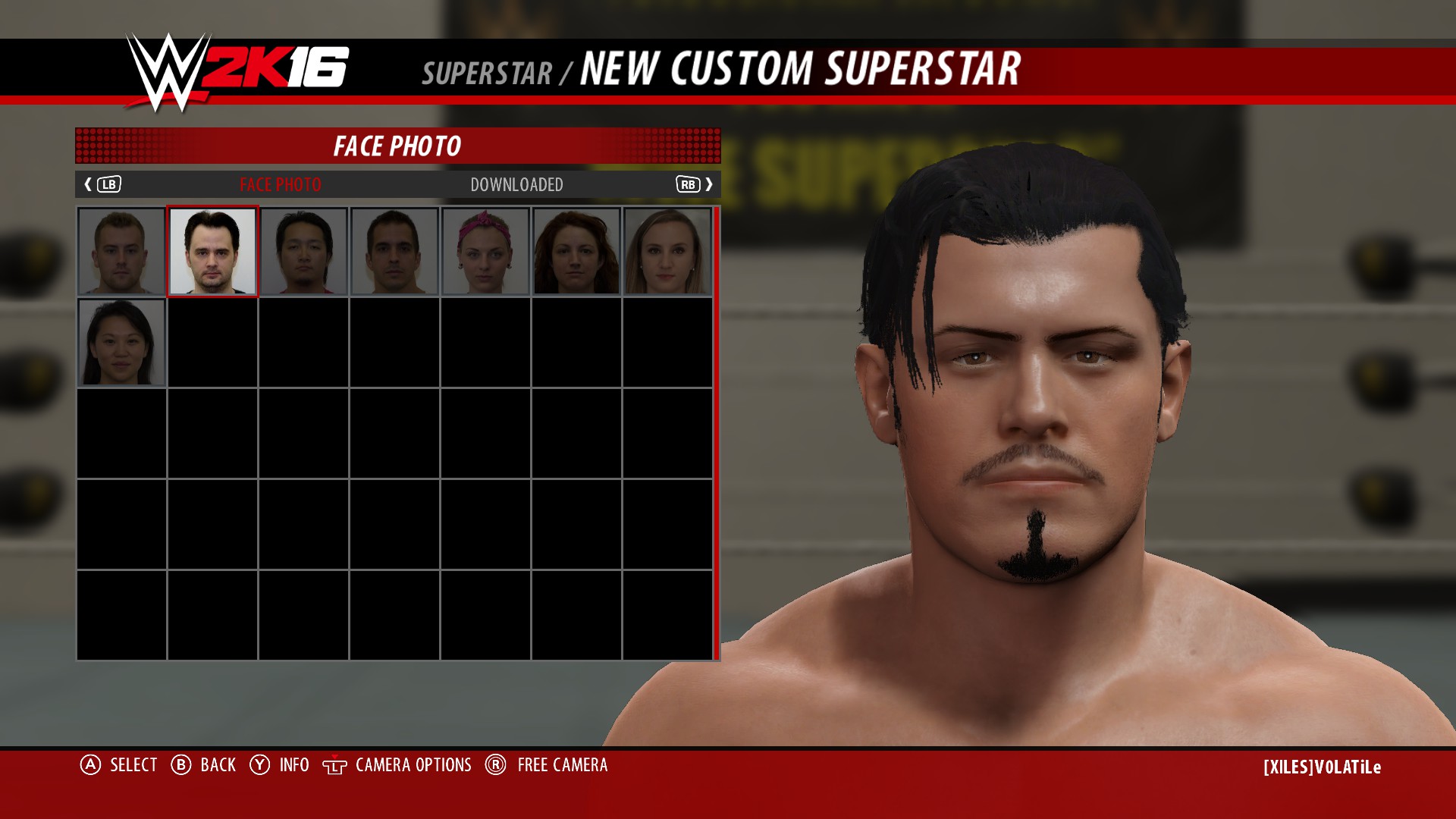 There are slightly more layers to determine your character’s personality and if they are to be perceived as a Heel (bad guy) or Face (good guy) by the crowd. Being a part of interesting storylines was few and far between in 2K15, hence, this time, 2K have ensured that rivalries and backstage interviews become a regular thing. Starting a rivalry may start organically, however, there are features put in place to help force matters when needed, such as run-ins and sneak attacks. Most importantly the career doesn’t end with a single WWE World Heavyweight Championship win instead you can go after different titles multiple times in a bid to achieve the Hall of Fame objectives.

Having plenty of options to upgrade my abilities, skills and hire managers will certainly keep me working hard to put on great matches for the crowds, as doing so earns many skill points. Unlike last year’s MyCareer, you cannot become an overall 90 rated beast overnight and you may take a few knock backs on the climb to the top, but I enjoyed my road to the Hall Of Fame.

Renee’s voice acting is just plain bad she has a really robotic character model and bad voiceover work. But the voice acting of rest of the superstars and the divas including the commentary team both in NXT and main events is a job well done by 2K games. The interviews helps with the experience but quickly turns into a grind.

Online mode has also received a bit of a makeover as well. Players no longer have to keep on sitting in menus as matchmaking occurs. Instead, it throws you head first into a practice match that may never end, due to often finding no one to play. 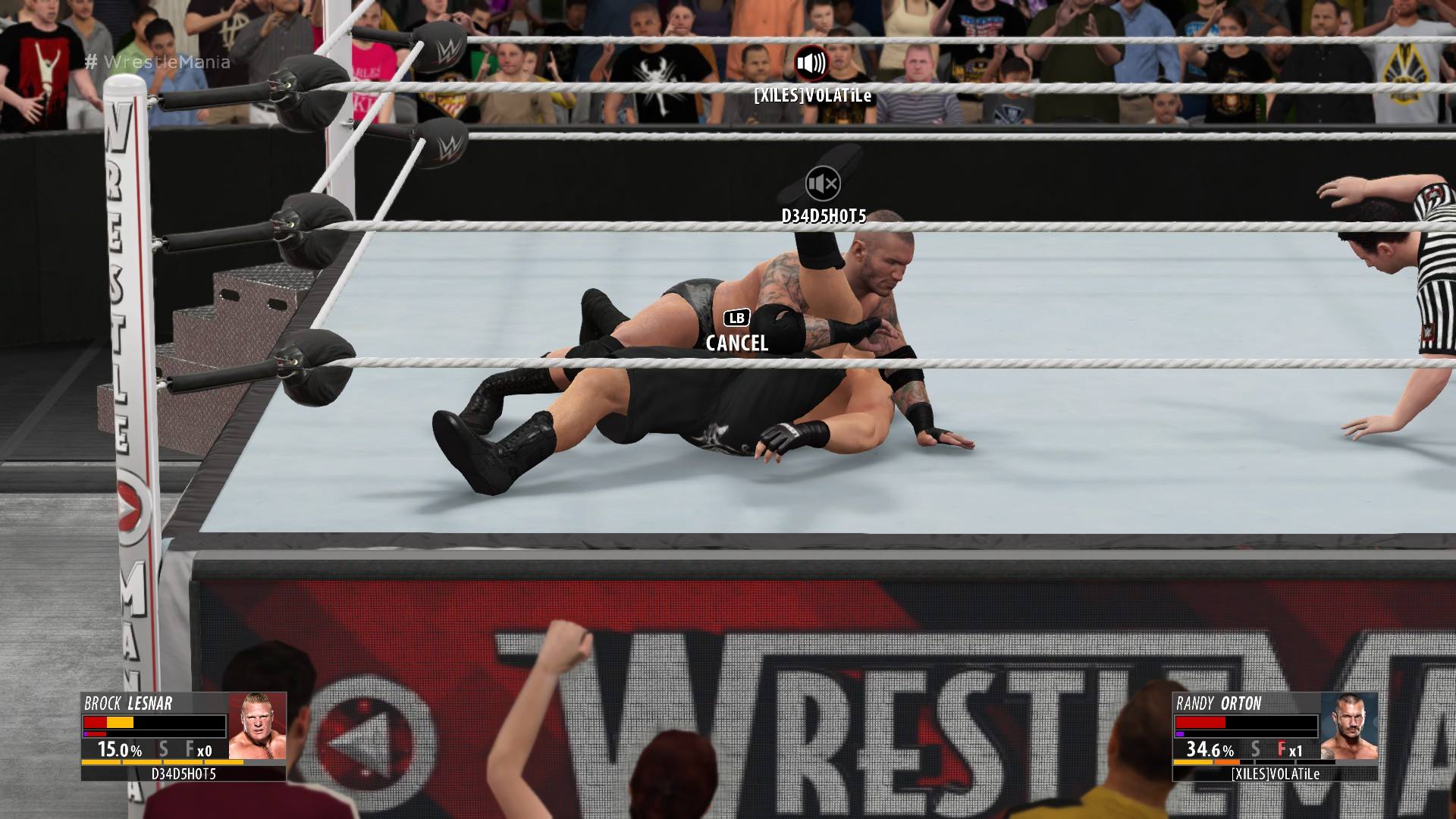 There’s a large amount of match types available to participate in. But lag issues plague online mode, button lag is ever-present and combined with the already present clunky hit detection, the overall experience tends to be more frustrating than fun. BUT the few times I found an opponent and had a lag free match, I found the submission and pin system to be less frustrating as unlike the AI, there’s actually a chance at making your opponent submit or to escape a pin. 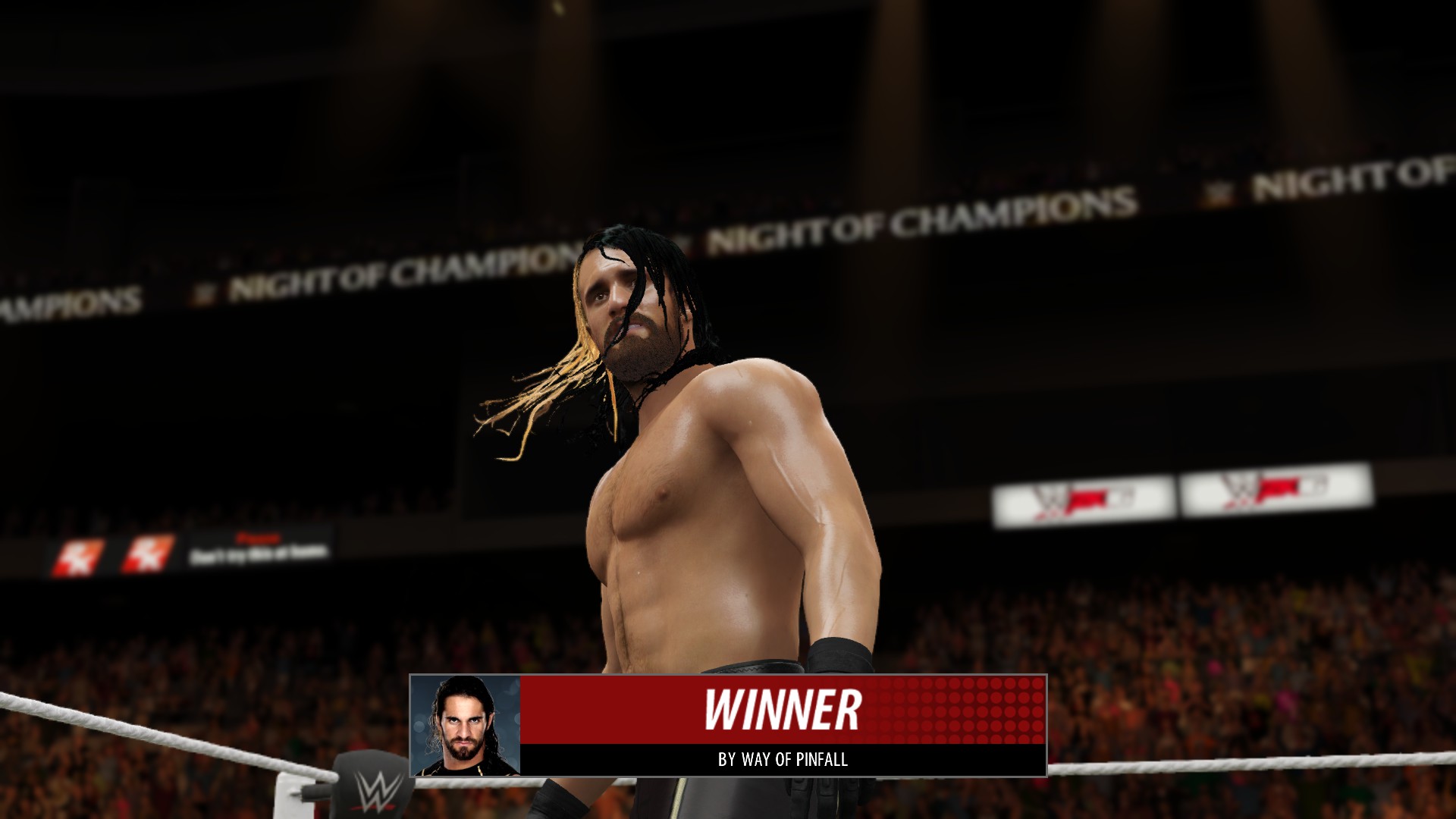