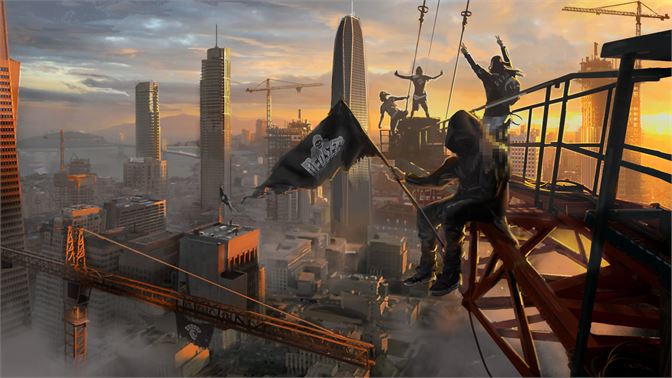 Watch_Dogs 2 is all about life in the age of surveillance. Much like modern society, the fictionalized world of Watch_Dogs 2 is plugged in everywhere – from mobile phones to even cooking appliances, everything is connected and everyone is being watched. But differentiating itself from its predecessor that shackled itself in a serious tone that resulted in a dull experience, Watch_Dogs 2 presents a more lively and fun world with underlying tones of gang violence, political corruption and the emerging threat of cyber warfare.

Even our protagonist – Marcus Holloway is a more charismatic and cheerful person than Aiden Pearce. Unlike Aiden, Marcus isn’t driven by a desire for revenge, instead, he seeks to set things right or rather what he thinks is right. This allows Ubisoft to play around with the mission structure and story.

There are missions that mock the Church of Scientology’s lucrative relationship with Tom Cruise, the North Korean hack of Sony Pictures, pharmaceutical executive Martin Shkreli’s acquisition of the only physical copy a Wu-Tang Clan album, and Facebook’s manipulation of its news feed and even hacking into Ubisoft’s own office. All missions have a certain sense of variety in them and can be approached in multiple ways, two new additions to the hacker arsenal – the RC Jumper and Quadcopter allow for a variety of methods to tackle your objective. There are 3 broad categories of approaching missions.

This variety allows for huge replayability potential, unfortunately, the only way to do so is to restart the campaign as Ubisoft has not added a way to replay the missions. 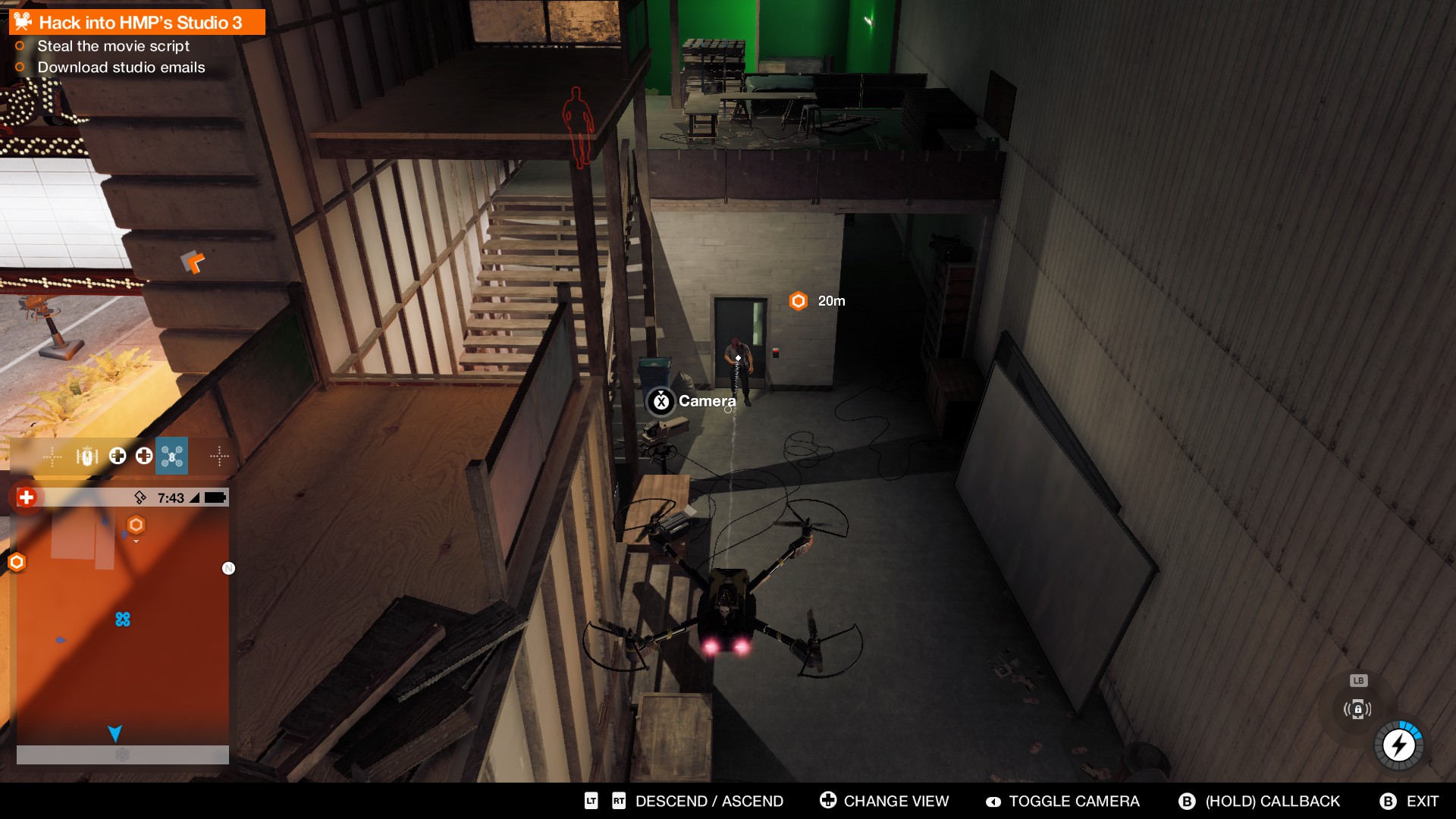 Marcus’s often childish and carefree attitude also supports the nonlethal options that are presented to the players at almost every mission. Why kill an innocent guard when you can just distract him with your RC as you sneak past the defenses ? Why shoot at cars in broad daylight when you can just hijack into the navigation system and cause it to crash ?.

DedSec makes a return as well and our band of anti-heroes is as equally interesting as our protagonist. Especially Wrench, with his emoticon helmet. The colorful cast with their distinctive personalities helps to deliver a more packed and gripping story that helps to drive long sessions of gameplay. 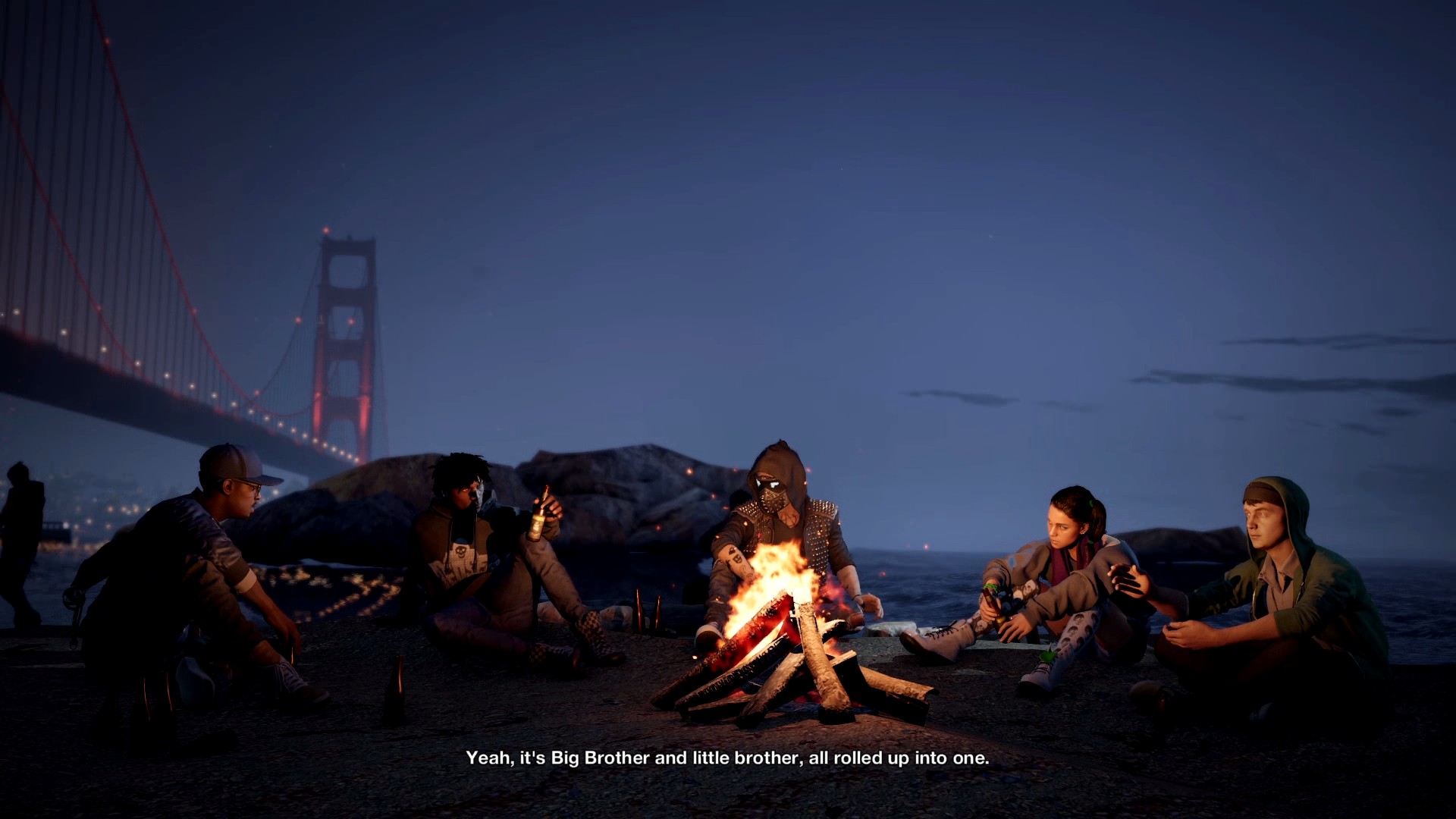 DedSec’s strategy is to capitalize on the power of a vast array of internet-connected devices of their followers who knowingly contribute the processing power required to overwhelm Blume’s infrastructure. This follower count acts as a currency to purchase upgrades, and Marcus embarks on hacktivist P.R. campaign to gather supporters. From exposing the Church of New Dawn to taking pictures of landmarks, anything impressive you do helps to up your follower count.

In terms of customization the game allows players to outfit Marcus with a wide variety of clothing, and even Marcus’s arsenal can be customized with cool and funky paint jobs. 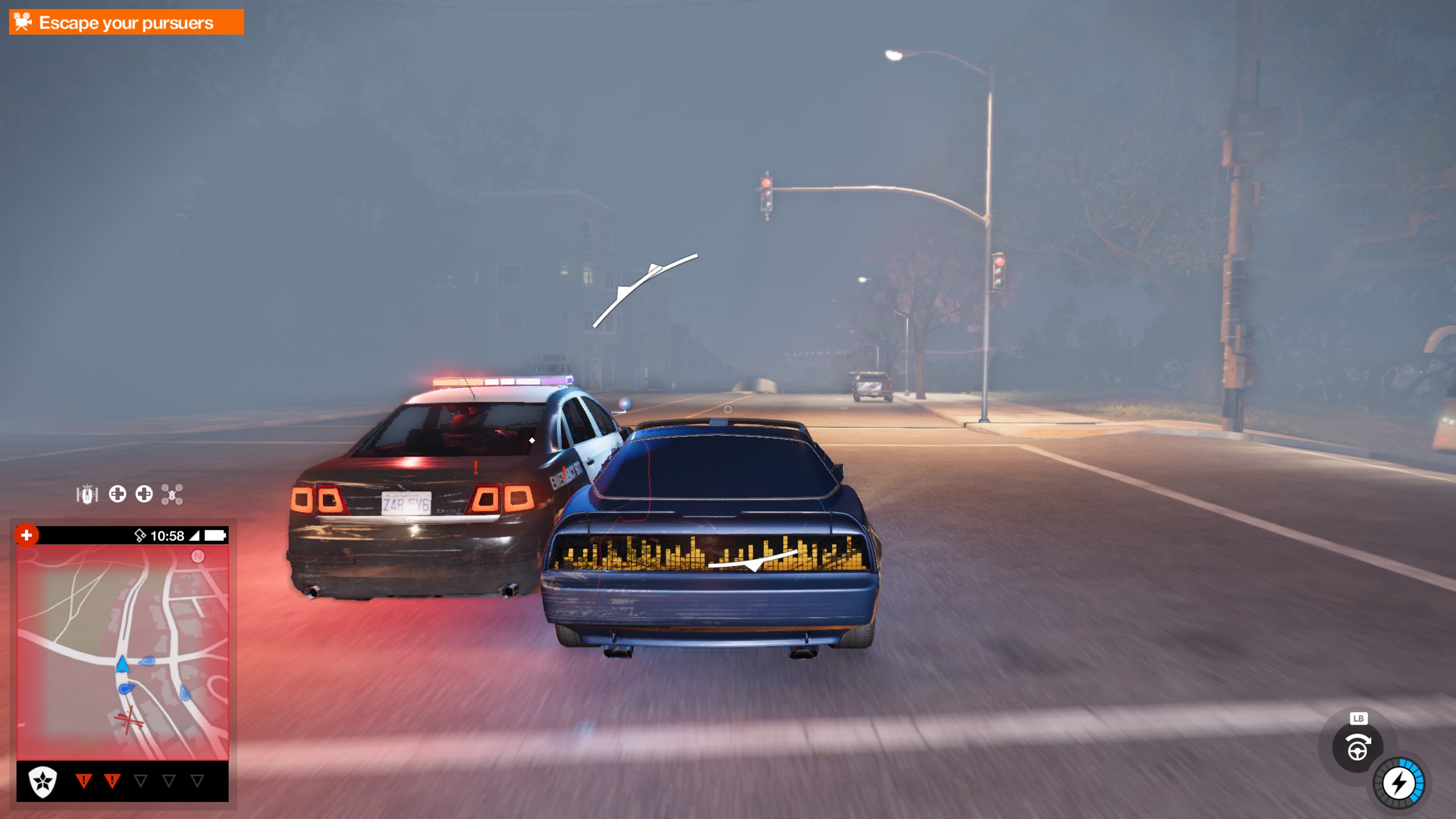 San Francisco is an amazing place and well recreated within Watch Dogs 2 and is jam-packed with things to do. You can use a wide variety of cars, bikes, ATV’s and boats to travel around the huge sandbox that Ubisoft has created. However, I felt that driving cars in Watch_Dogs 2 was a bit wonky and overly sensitive. Bikes, on the other hand, were my preferred method of transportation allowing for thrilling high-speed joy rides through San Fransisco. 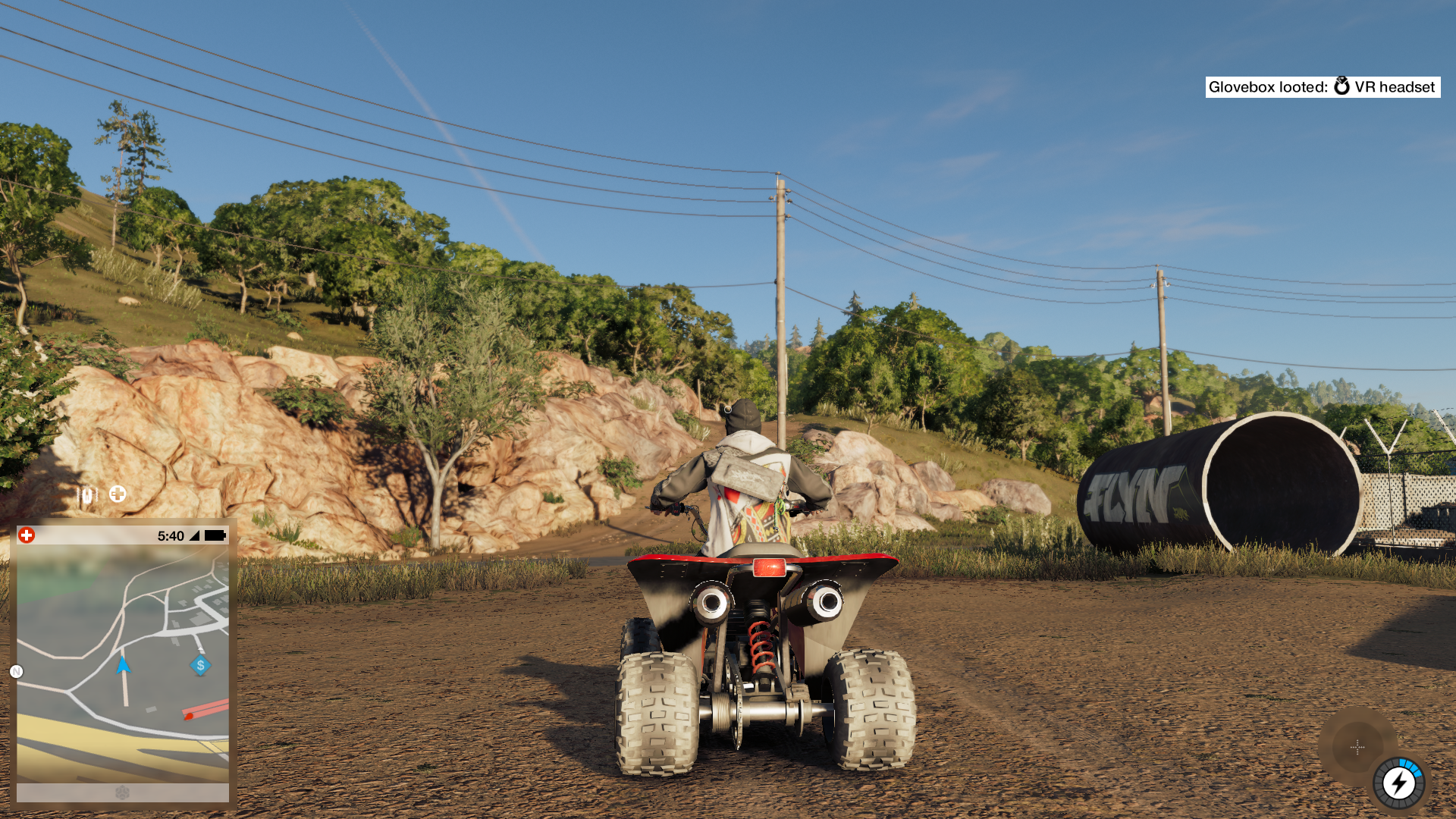 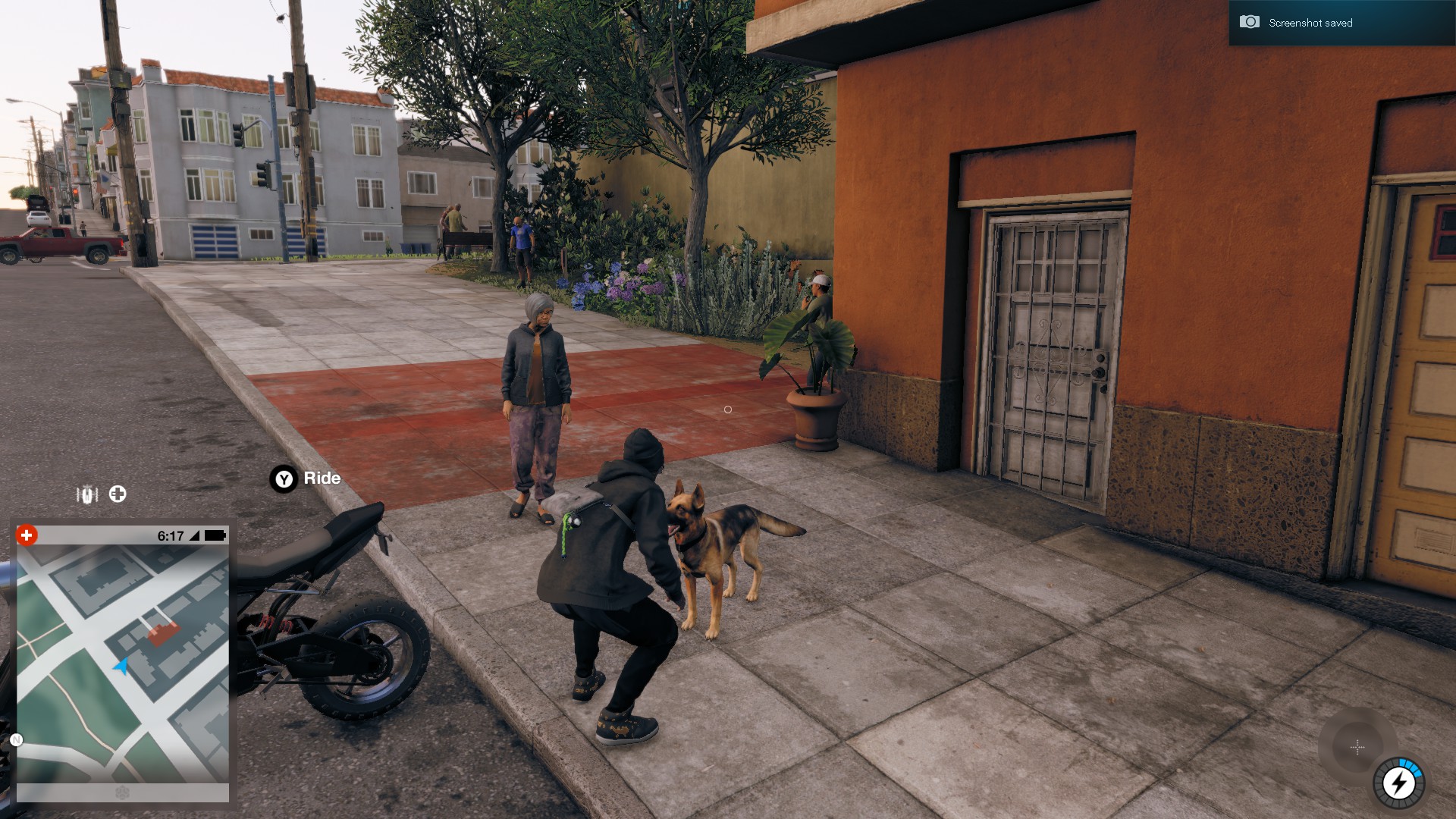 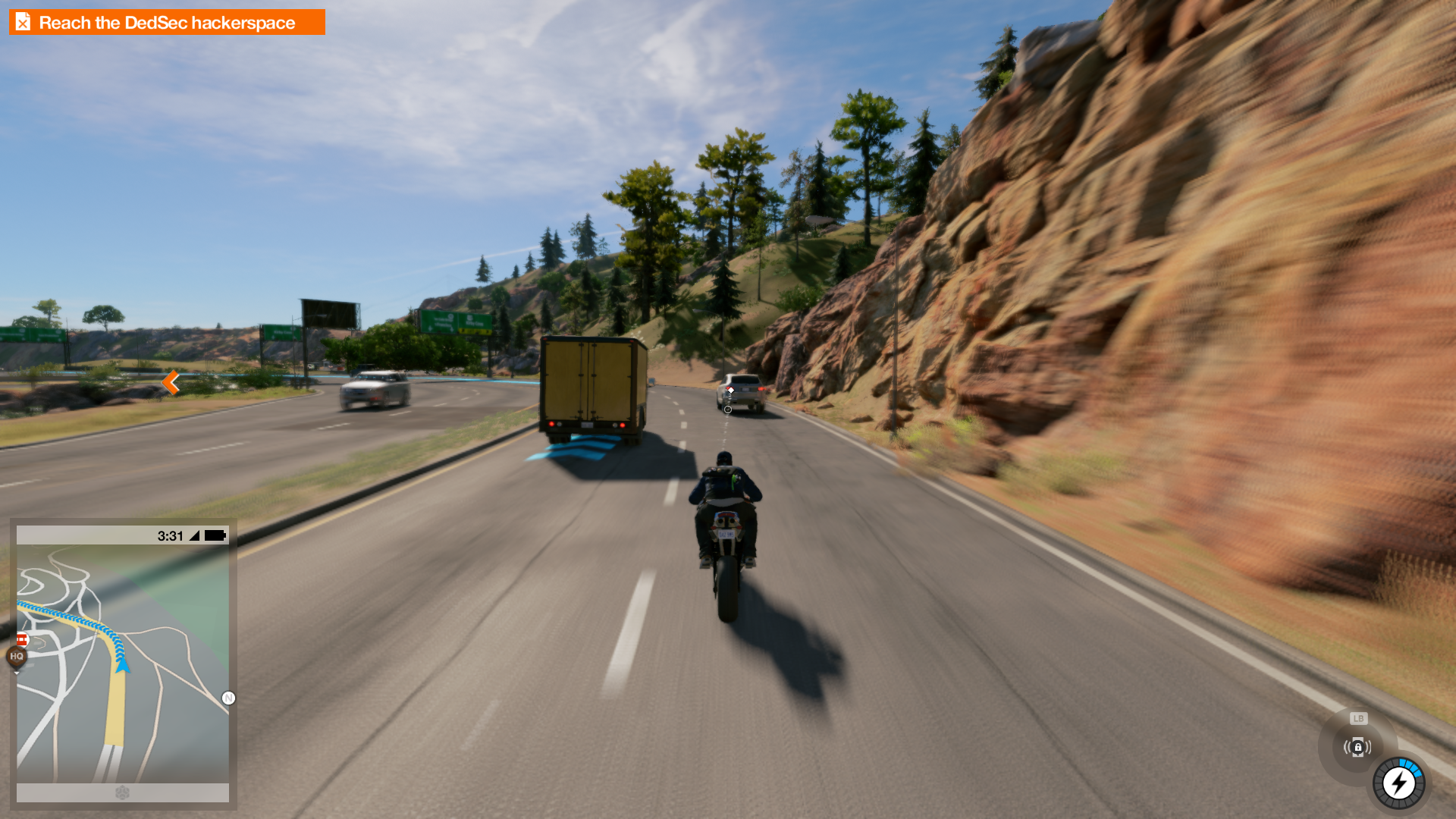 NPC variety has also seen a huge upgrade from its predecessor. The profiler still amazes me with its creative and mostly accurate results. On multiple playthroughs, I found NPCs displaying behavior that actually matched their traits. Streets are littered with people walking their pets, having normal conversations, reading newspapers or just going about their daily lives. The world feels alive and immersive. 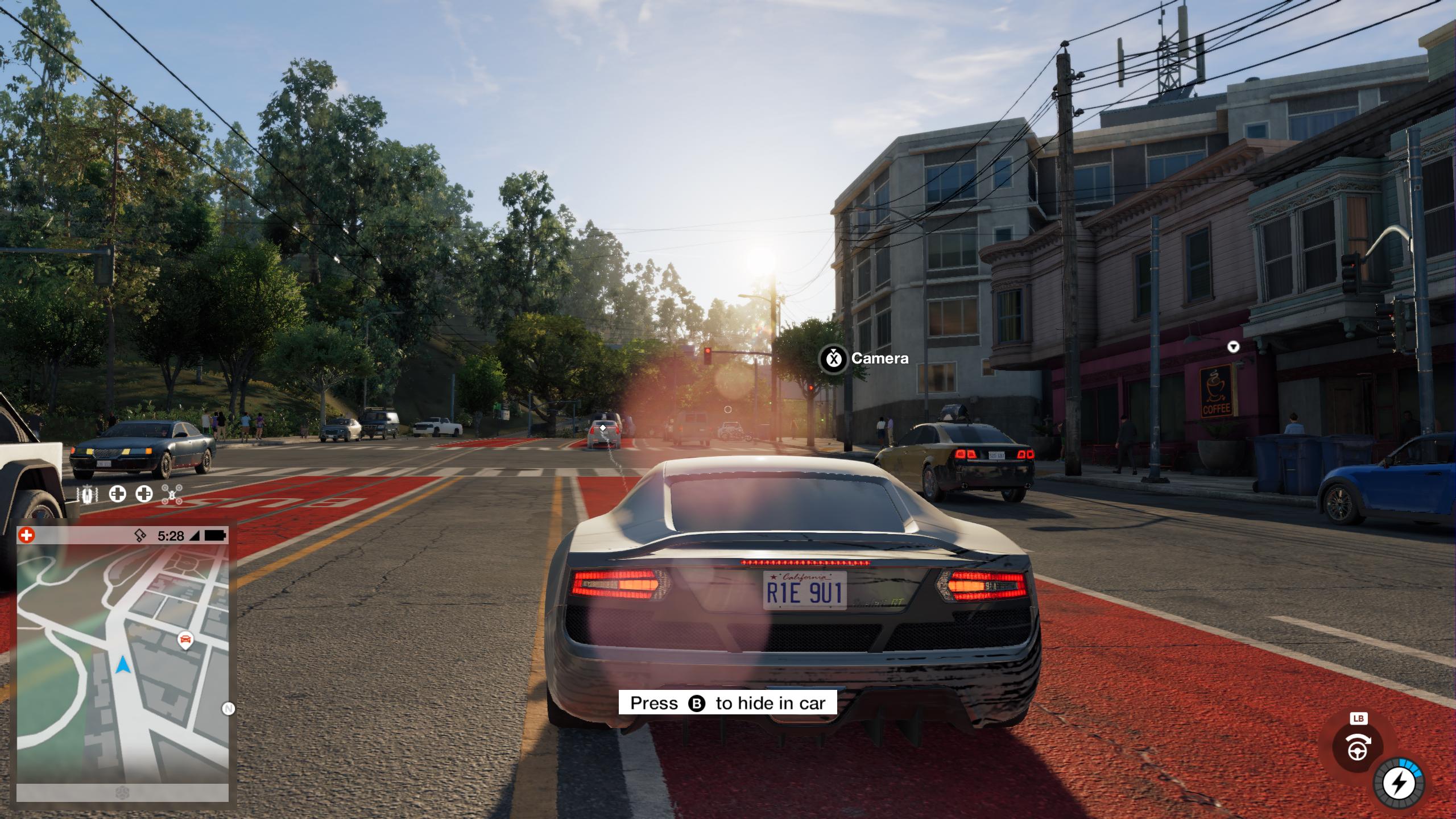 Watch_Dogs 2 is really impressive when it comes to visuals. San Fransisco is recreated in a rich color palette with details exploding out everywhere, from extremely well-done street art to faithful renditions of every street sign. Extremely well-done textures, sharp shadows, and reflections often blur the line between reality and the game creating photo realistic scenarios. Even the iconic San Fransisco fog is featured in the game thanks to Ray Marched Volumetric Fog that stretches across the San Francisco Bay and Golden Gate Bridge.

To enjoy Watch_Dogs 2’s graphical superiority to its fullest you need a lot of firepower but thankfully optimization this time around is much better than the absolute mess of a port that was the first game. However, because the game is fairly CPU heavy, I did run into a bit of stuttering on my FX 8350 system which was sporting 16 gigs of RAM and a GTX 1060. Toning down the texture quality helped and I managed to get 60 FPS with everything else on very high and ultra. On a more powerful system, which had an i7 4770k, 1080 and 16 GB RAM, I managed to max everything out and get between 50-60 FPS.

Watch_Dogs 2 also features seamless multiplayer and co-op. Co-op is basically you teaming up with a DedSec ally to tackle co-op missions or just roam around San Fransisco causing chaos. Now these co-op missions still feature the same freedom of approach as their single player counterparts but lack the charm and interest and often end up being mere repetitions of the same objective with different locations. PvP is also featured in the form of hacking invasions and bounty hunts, invasion has you hacking into other players to steal their data or finding out the hacker if it’s you that is being invaded, while bounty hunts have you teaming up with the law to take down notorious players.

While the amount of music included in the game isn’t as exhaustive as a Grand Theft Auto game, Watch Dogs 2 soundtrack has been carefully curated to include some great hip-hop, rock, EDM, and pop music.