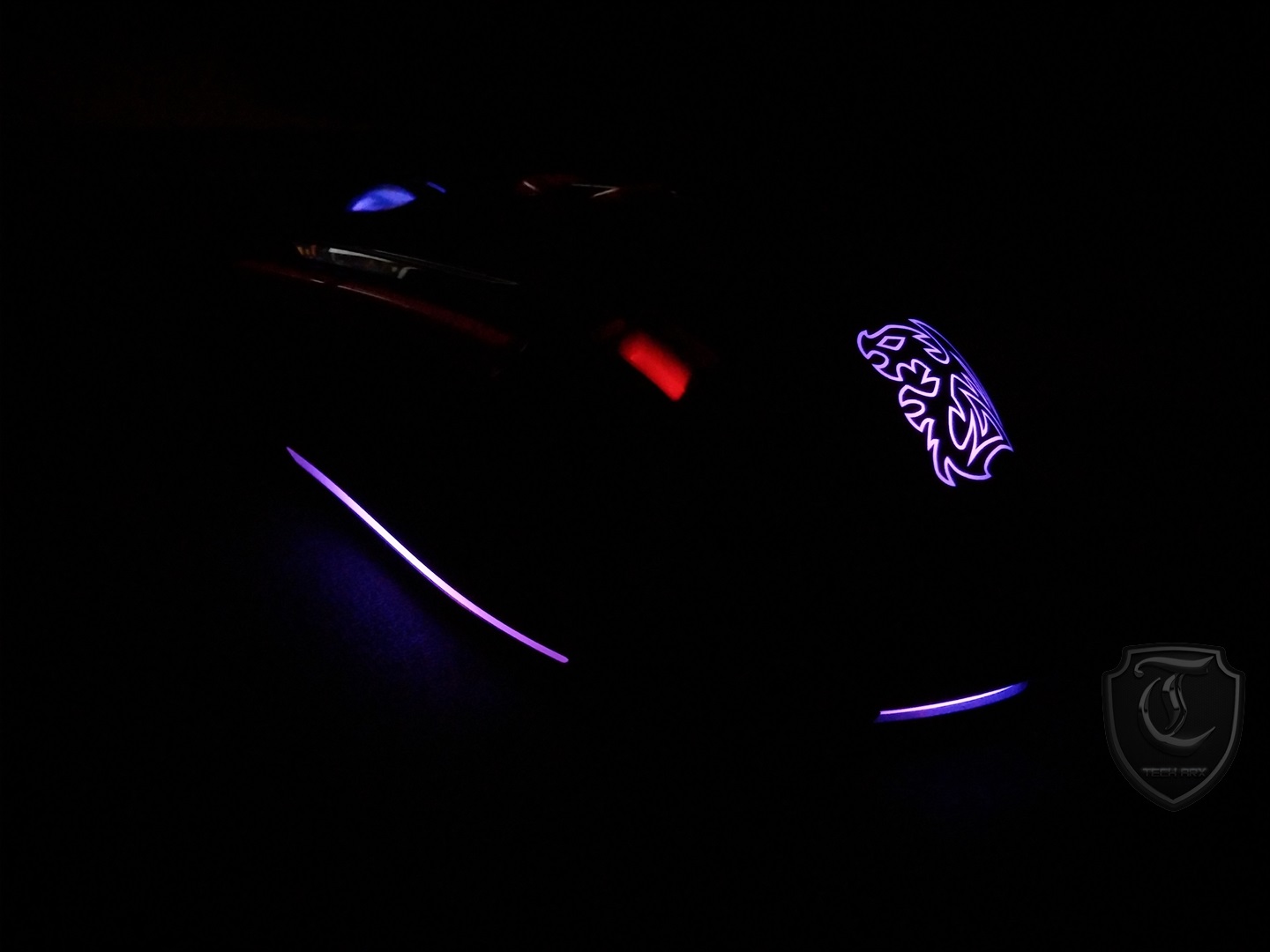 The Smartest Mouse Ever

TteSports, the gaming division of manufacturer Thermaltake has been the center of attraction for many of their designs both in cases and in gaming accessories. Recently we got our hands on their new Thermaltake Theron Smart mouse which is a recent entry to their lineup.

The THERON Plus SMART MOUSE – the classy sheen smart mouse that built with an upgraded AVAGO laser sensor with up to 8200 DPI that consist an additional integrated Bluetooth communications device to sync your mobile device (iOS/Android) with Tt eSPORTS PLUS+, the mobile application that can store gamers’ stats to the Tt eSPORTS PLUS+ Community & Data Management Platform 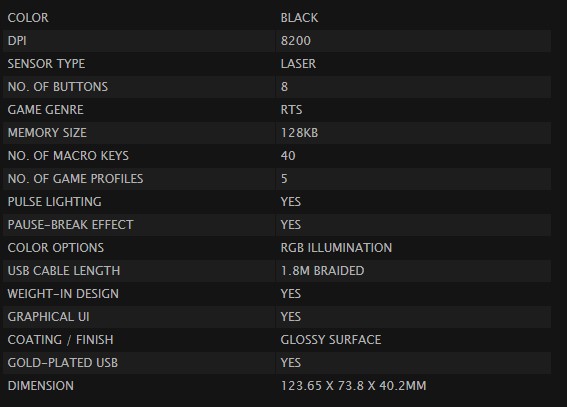 This mouse incorporates the “Internet of Things” or IOT philosophy, like the current trend of smartwear devices, the mouse tracks your gaming performance data, allowing analyze and sharing of data for different purpose. 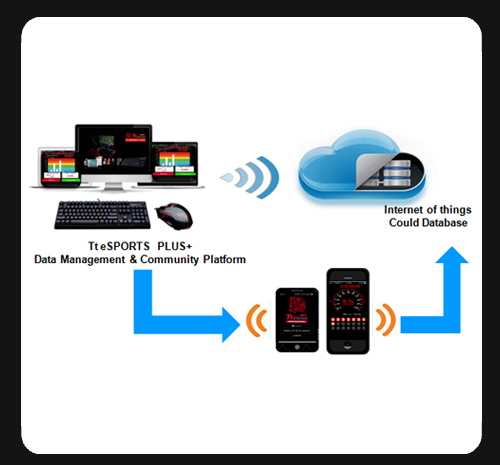 On the basis of the I.o.T. (Internet of Things) concept, users can obtain and share gaming performance data. Additionally, users are capable of analyze statistics records for improved strategies via data management on both PC or mobile devices – anytime anywhere. With Tt eSPORTS’ Plus+ mobile application, you can even review all recorded performance histories on your mobile devices.

As you can see the main target audience is E Sports gamers, Thermaltake made it clear on the box. 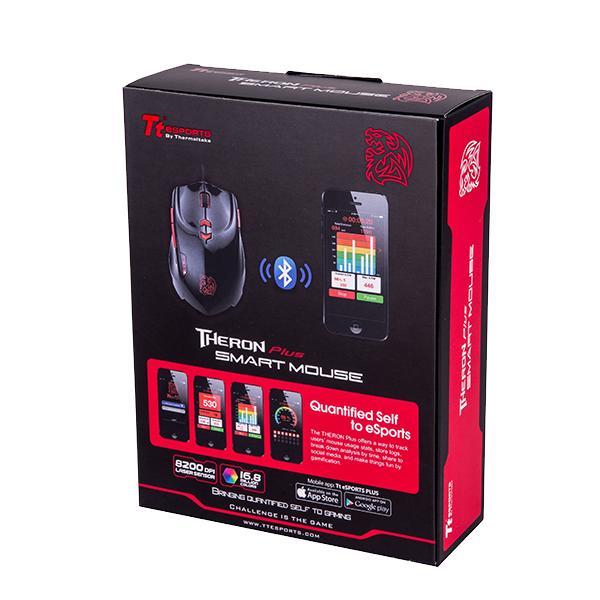 On the first impression of mouse feels comfortable in the hand as it is palm grip which is pretty common for gamers. The surface is glossy and which might result in some sort of loss of grip during long sessions. 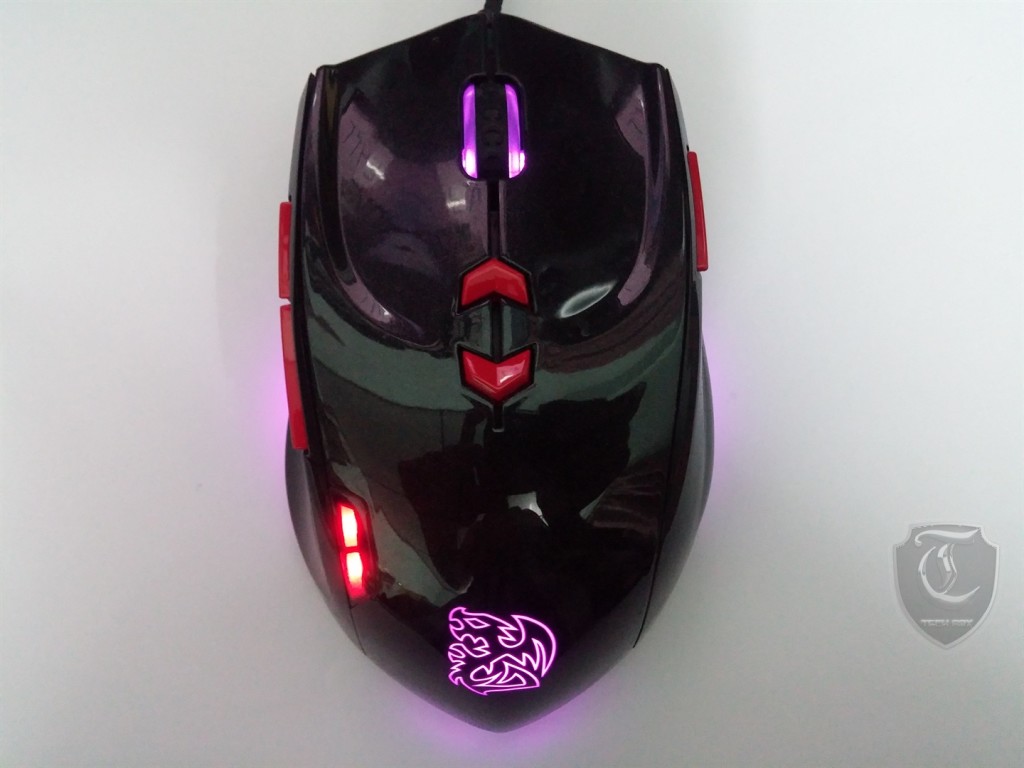 There’s a pair of switches down the left side 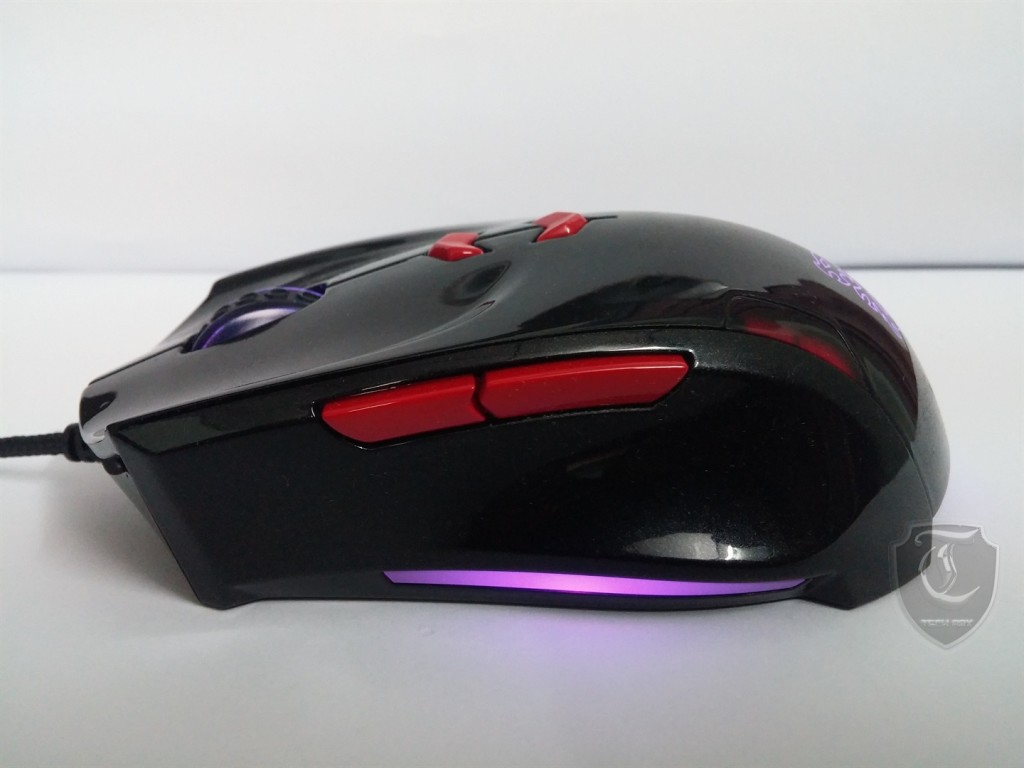 Around the back of the mouse, there is a set of LED indicators between the top and left side panel. 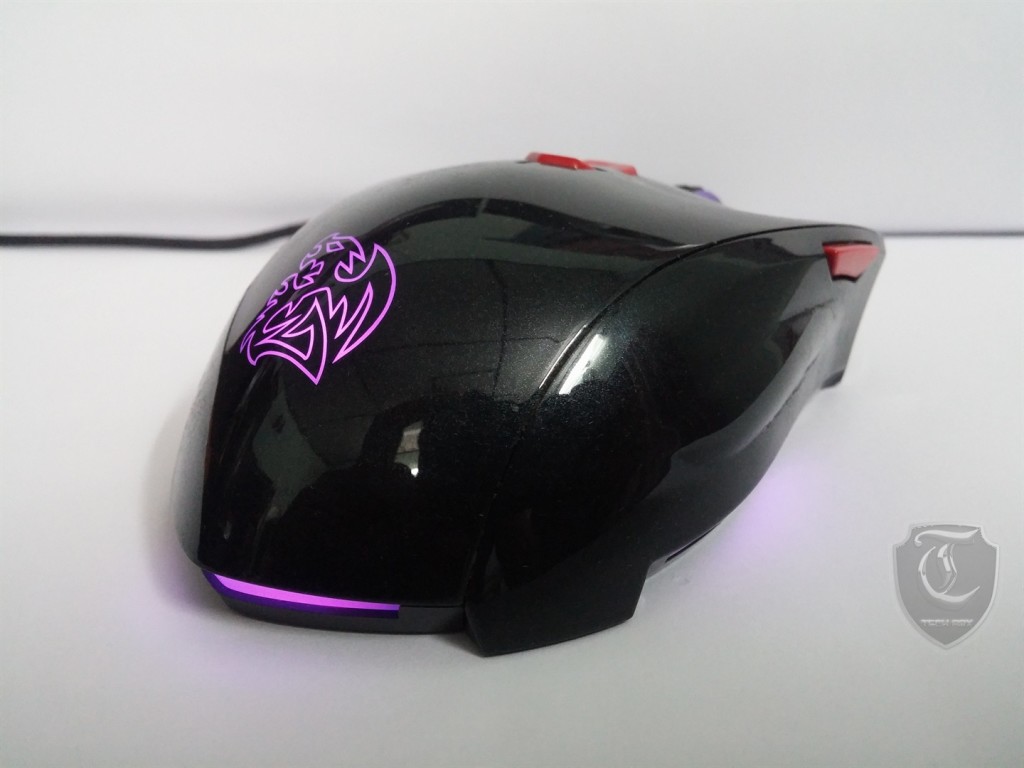 There’s also a colour customisable LED strip along the bottom of the mouse. 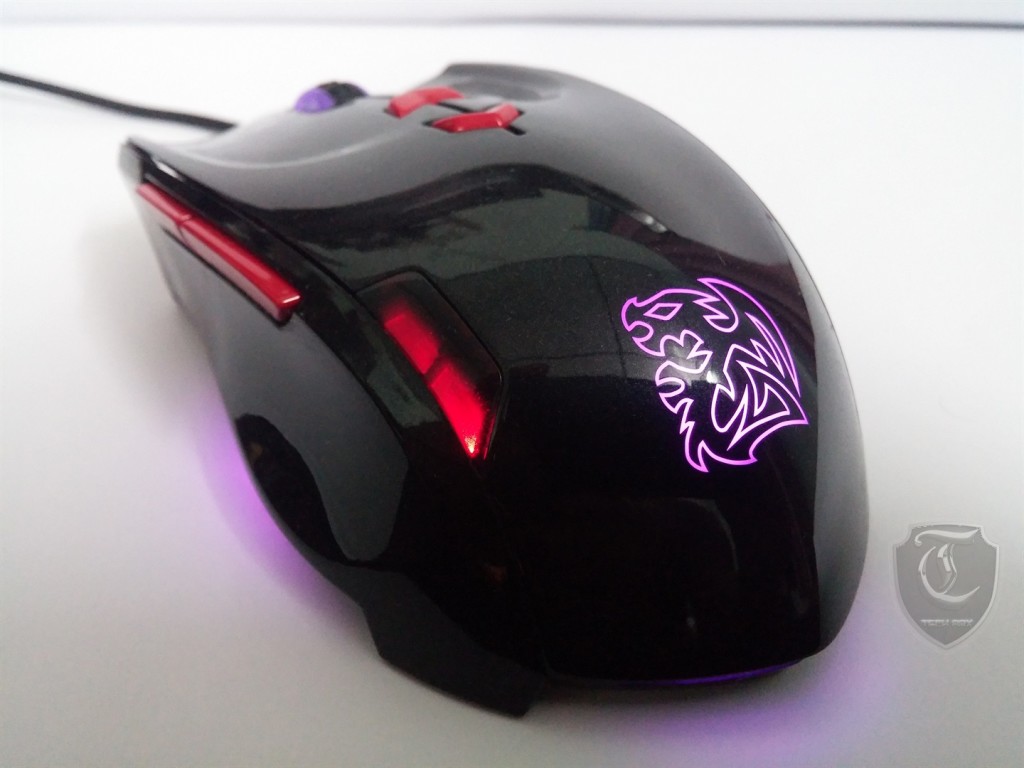 The right side of the mouse features a single switch near the front,

Both the left and right mouse buttons are heavily recessed with a curved shape allowing a better finger resting place. 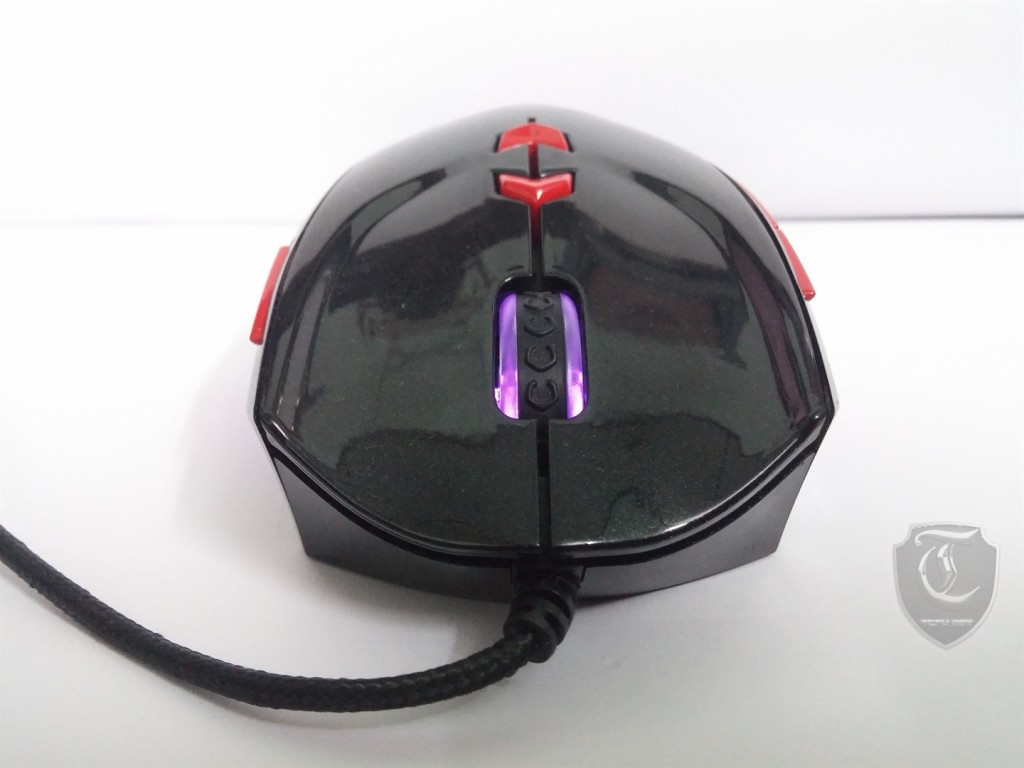 The scroll wheel is deeply recessed , which features a soft rubber grip coating and a light tactile bump .

Coming to the bottom we see a glimpse Avago 9800 sensor along with a profile switch and lock button and on-the-fly polling rate adjustment. we also see the space for Weights. 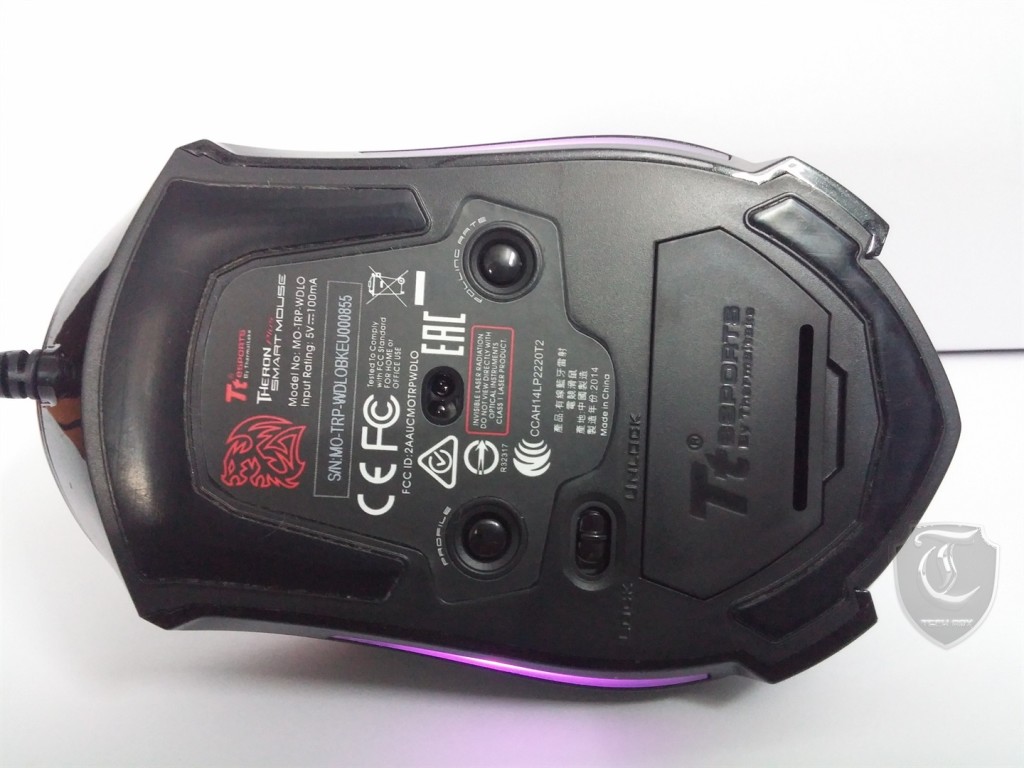 The RGB illumination is the final touch to the Theron Smart which is impressive and supports upto 16.8 Million Colors. The Led illumination lights up with a breathing feel and we can change its mode from RGB to Single light or separate colors for separate position, though the palm touches over led lights but it never gets affected. 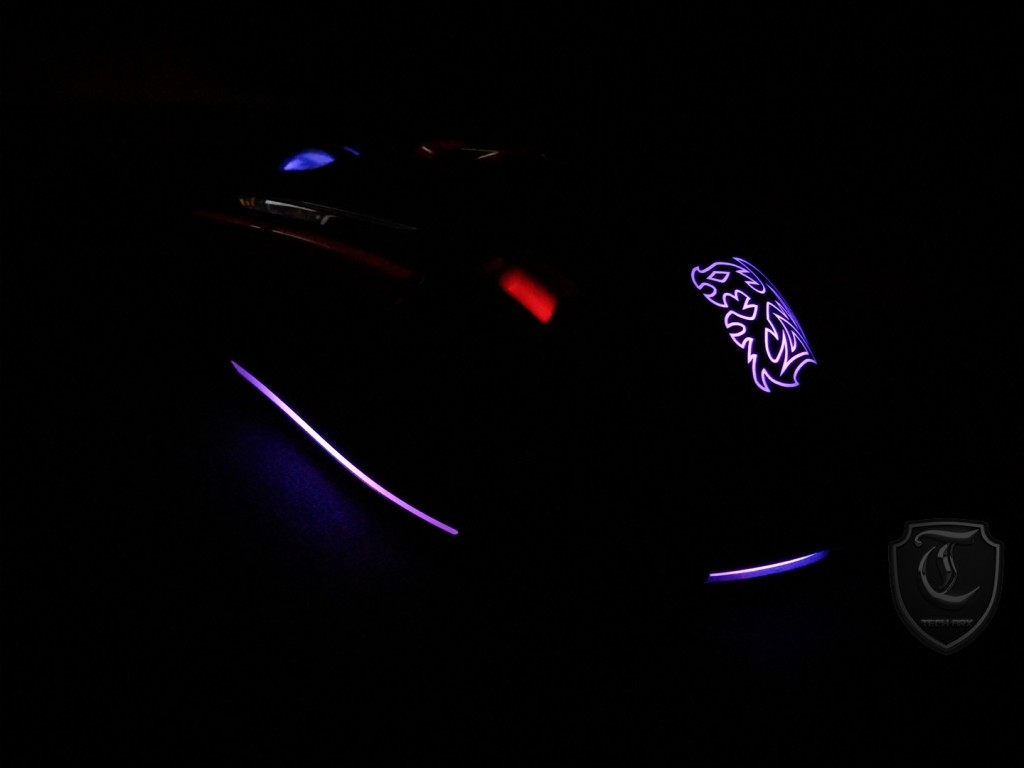 The software package is pretty decent and the installation is divided into two parts. First you need to download and install the desktop software, then you’ll also need the mobile app, which is available for both iOS and Android. Simply install them, sign up, pair the mouse with your phone via Bluetooth and you’re good to go. We will go on detail about the mobile app later on. First lets take a look at the desktop part

There is are two different mode in this mouse, Normal and Battle. 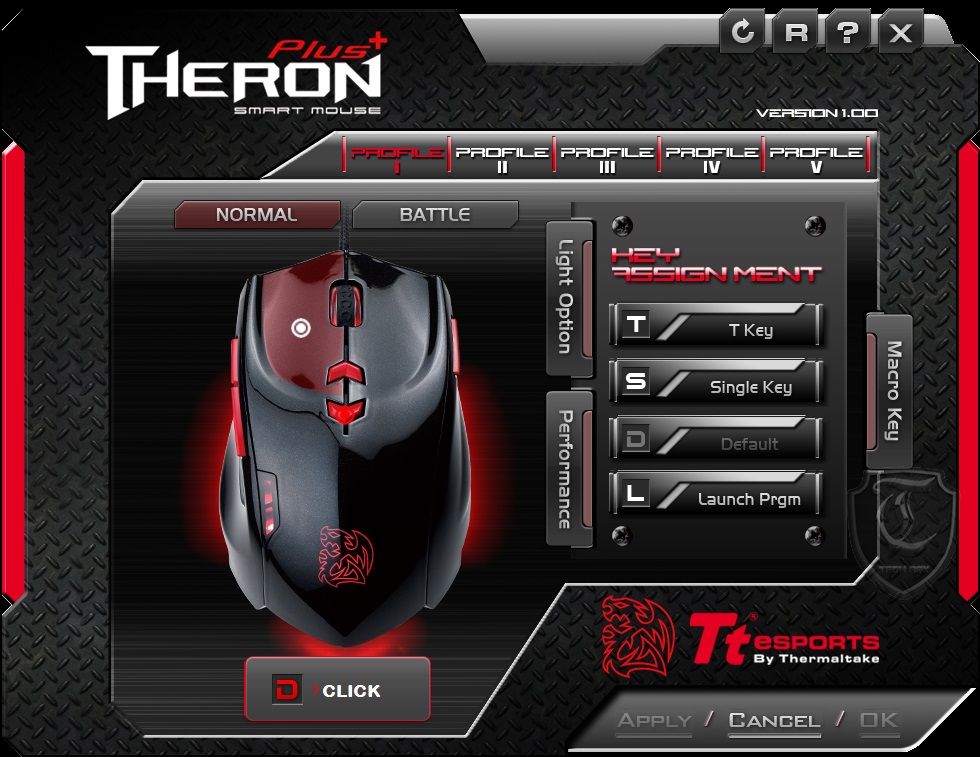 In the Performance Tab we can change Polling Rate, Sensitivity, DPI Level, Cursor Speed, Double click speed and Scroll Speed. The Polling Rate is supported up to 1000Hz and in addition the Lift-off-distance adjustment feature is now built inside the software, rather than having a separate tool to modify it and we can configure the mouse in five separate profiles. 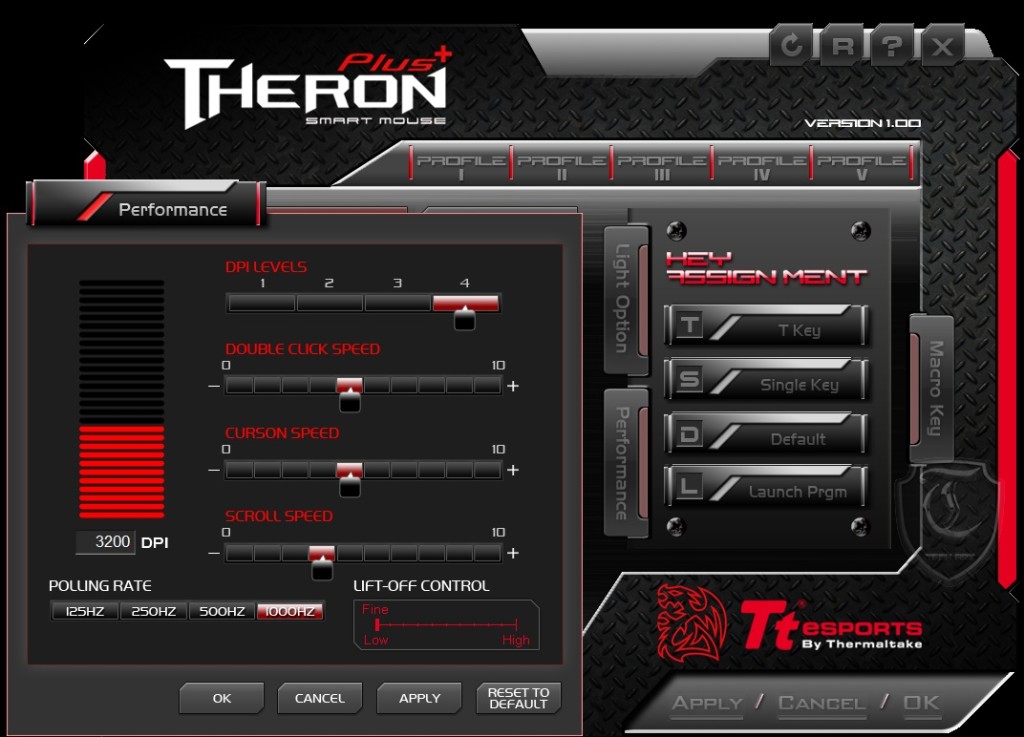 the Theron Plus app is straightforward enough although a bit rough around the edges. You fire it up, pair your mouse via bluetooth(which might take a bit of time in some phones) and you are good to go. 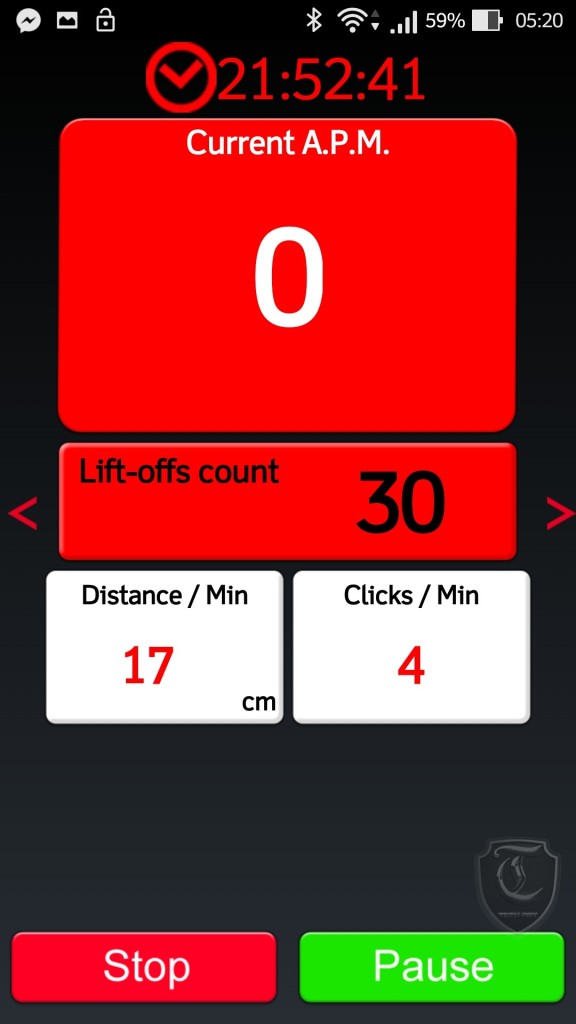 Optionally you can choose to geo tag your location for easy sorting of data.The geo tagging is useful if gamers want to analyze their performance by events.

We used this mouse mostly in Battlefield 4, Battlefield 3, Counter Strike Global Offensive, Witcher 3 and Crysis 3. Most of them are FPS Games as I wanted to test it out how much aggressive it can perform and response.

Battlefield 3 (Multiplayer)
In game sensitivity was 8% with 850DPI. The mouse performed much smoother and the aiming was same as before. I didn’t saw much improvement in Battlefield 3.

Counter Strike – Global Offensive
Excellent performer in this competitive game. Aiming was much better than before and there was a stable performance. Recoil control was better than before. I played with 2.33% In game sensitivity and 1000DPI

Thermaltake took the already good Theron platform and improved upon it by adding a few more features at a no price rise;nothing more can be added to this(possibly). Overall the mouse performed well beyond expectations barring a few areas regarding the software.

However the software even with all the features build in and with all the bells and whistles feels a bit rough around at the edges at times. The issues however can easily be solved and am sure the RnD at TT Esports is already working on it as we speak.

Overall The Theron Smart mouse gets a 8/10 from us. It’s a great all-round mouse; as long as you can deal with the palm rest style.