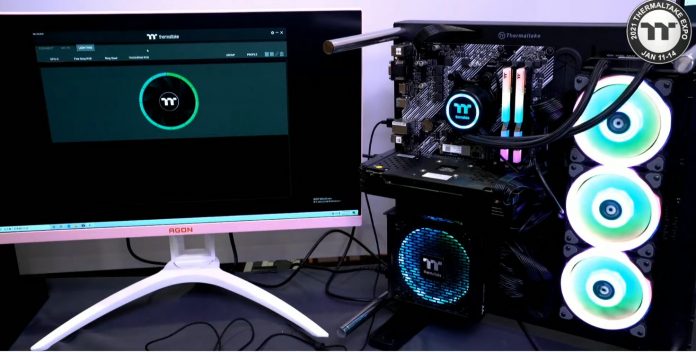 For people who do not want to pay for the LCD built coolers. Thermaltake brings their Toughliquid ARGB AIO liquid coolers, these come with a decent ARGB logo on the CPU waterblock and the standard Toughfans pre-installed. Toughliquid ARGB coolers comes in 240, 280, and 360 variants.

Thermaltake also has Floe RC Ultra CPU and Memory cooling AIO liquid cooling loop. These come with LCD displays on CPU and Memory blocks and will be available in 240 and 360 variant.

Thermaltake has introduced new range of Air coolers they have introduced the Toughair series, these coolers come with the Toughfan.

Thermaltake has introduced their ARGB Air cooler UX210 which comes with 5 heatpipes and a ARGB fan and includes a controller and tdp is rated for 150 watts. Also they showed a laptop cooler with 5 fans.

Thermaltake’s Pacific Liq tester is a tool they have made to help you test a liquid cooing loop for any chances of leaking.
Thermaltake’s new CPU waterblock Pacific mx2 ultra comes with a display on top so you can see info related to CPU on there(tempareture, clockspeed, voltage etc.) and also customize it with gifs or jpegs. You can customize their Pacifica R1 memory cooling cover and Pacifica A2 Ultra memory cooling waterblock as well since they both will feature a display cover.

Consumer Electronics Sumon Pathak - April 17, 2021 0
Kingston Digital released the ‘Canvas’ series of Flash memory cards in 2018 and the series was widely popular. However, with changing time and...

MSI Discontinues RTX 3080 Gaming X Trio Replacing it With The...