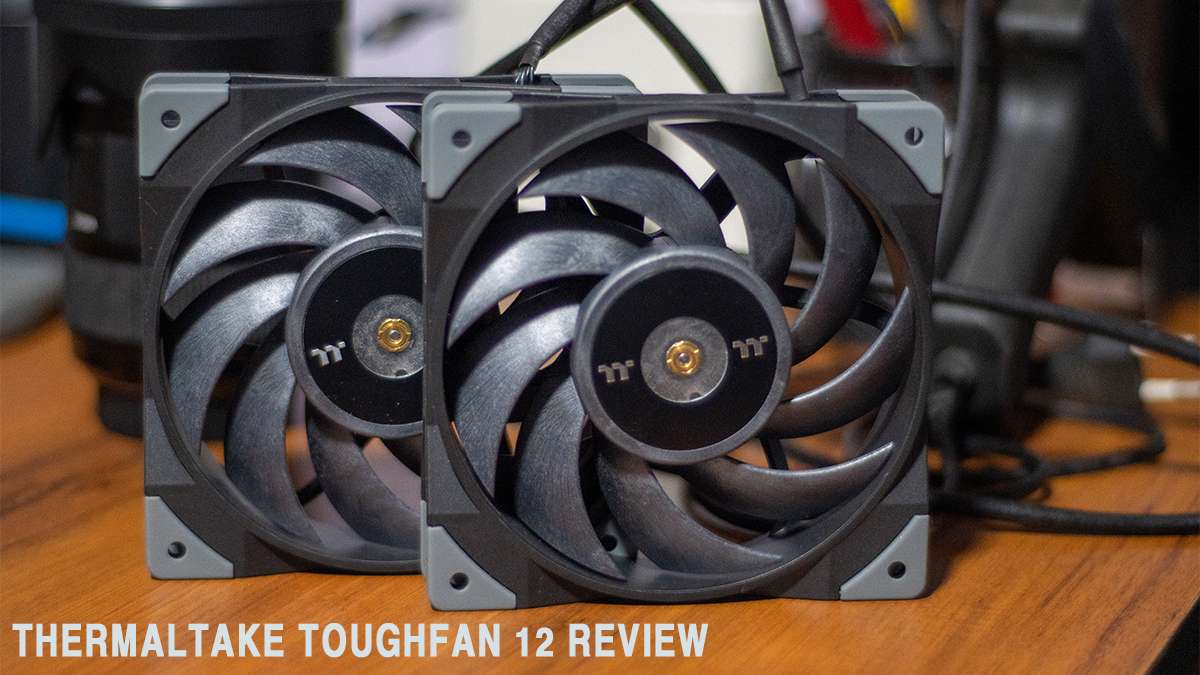 Thermaltake TOUGHFAN 12 caught my eye since its inception and release. So, when Thermaltake approached us with a sample, we were pretty thrilled. Sadly, the samples came late due to some shipping issues and in the middle of a review backlog, hence the slight delay. So, without further ado let’s get on with it..shall we? For the record, we were provided with a two fan pack.

A close look at the fan gives an idea about how well built the TOUGHFAN 12 is. The whole TOUGHFAN series uses a reinforced liquid crystal polymer (LCP) framework used in Industrial grade fans, which puts it on par with industry stalwarts like the Noctua NF-A12x25 or the latecomer Phanteks T30-120. The LCP is supposed to give the fans higher mechanical strength and stability, longevity, and uniformity in the production, all the factors are relative to the usual ABS and PBT plastic fans available in PC DIY. Overall, the fans feel a lot denser and heavier weighing is around 200gms each.

There are nine blades on the impeller with a big hub in the middle covering the motor and bearings. The hub raises a bit of concern since this can lead to a dead zone in push set up with a standard radiator. Branding comes in the form of two Tt logos in the middle on the front hub, other than that the fan looks pretty industrial-like its competitors. There is no airflow or direction indicator which I believe is a small design oversight but there are removable dampeners that facilitate cable management and customization. The TOUGHFAN 12 is a standard 120 x 120 x 25 mm fan using a squared-off frame, which goes perfectly with a radiator. Rounding off, these fans give off an old Swiftech or NIDEC GT vibe.

Accessories wise as the fan comes without RGB there isn’t much to talk about. The fan kit came with a set of four self-tapping shorter metal screws and a set of four 30 mm long screws with the bottom section UNC 6-32 threaded for AIOs and DIY radiators all packed in a neat black box. The LNC cable comes separately without any box or packet whatsoever. The total length of the cables is ~50 cm long and they terminate in a standard 4-pin PWM plug for power and control. The LNC cable which is probably a series of resistors in series adds ~10 cm to the mix. Overall, a nice set of accessories and is nicely done.

One of the problems of being a self-funded organization is a lack of capital. It is this lack that stopped us from having a proper airflow testing setup in our labs. To compensate for that, we turn to the nearest alternative, tests of CPU thermals. In our complete unofficial testing procedure, we were able to confirm that the fans run at the factory specifications and the rated RPM with and without the LNC adaptor. And with a ragtag setup of an octa-core Ryzen CPU running in a Lian Li 011 cabinet decked with fans we saw a drop of 15C when compared to the stock cooler and about an 8C difference with an aftermarket cooler running with stock fans. We can safely say that these fans are good and Thermaltake delivered! We will be able to add more data into the mix since we have a cooler coming courtesy of one of our patrons and we will update this review with those numbers. (and if you want to help us out please contact us).

At the time of writing the Two-Pack of Thermaltake TOUGHFAN 12 comes at around 5000 INR on Amazon India. It is currently out of stock everywhere else that we have looked. The price would be a bit lower on the streets since Amazon adds their own overheads. At 2500 INR a piece the fan raises eyeballs quite a bit.

For that price, we get a no-frills high-performance fan which while looking good does its job well. And with its nearest competitor almost always out of stock, the TOUGHFAN compels a strong argument in its favor.

Should I Buy Them?

If you are in the market for high-performance fans with a strong airflow and low noise output, then yes. The TOUGHFAN 12 is an excellent choice even at its current price considering the competition is almost always absent and is priced wayy higher than it should be.

A silver from TechARX, please fix the stocking issues Thermaltake!