The Witness is an open world puzzle game developed and published by Thekla Inc. and directed by Jonathan Blow. This game is a follow up to the critically acclaimed although highly successful BRAID.This game takes place in an island with multiple puzzle areas. And by multiple, I mean A LOT OF PUZZLE AREAS. The main objective of this game is to unlock various puzzle areas to unlock one final puzzle area where if you solve the puzzle, you finish the game. Spreaded across the islands are millions and millions of electric panels each of which contains a puzzle. The puzzles are usually are the variation of the same thing where you start from a point and then create your way to the ending point with some variations in the rule as well. 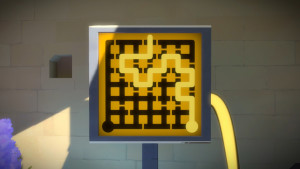 There are puzzles which varies in difficulty too. There are some puzzles which are ridiculously easy, and then there are some puzzles where you will spend atleast five hours figuring out where to even start. The designers of this game never really explained anything about the game. So, when random stars and triangles and squares pops up, you start to question yourself,” what the heck am I even doing here?” Outcomes of solving some puzzles vary. Like some puzzles will unlock doors, some puzzles will create bridges to access another area. There are some problems with the game. Firstly, the lame easter eggs. I did’nt actually enjoyed them that much, secondly, the ending. I’m not gonna spoil it but I have to say one thing here. The endings of the indie games these days are so off. Like, take the ending of this game for example. It kinda left me with a feeling that I just wasted all of my time playing the game.

Overall, I enjoyed this game. But I don’t recommend this game for 40$. I recommend you wait. But hey, if you’re into hardcore puzzle games, then it’s your thing, I’m not going to stop you. It’s your money. But I will say this, let it go down to 20-30$, then it will be good buy.

The graphics are fairly pleasing to the eye. Never really saw such hard work on graphic designings when it comes to hardcore puzzle genres. Job well done all around. The environments are easy going in the open world point of view. The gameplay is neat, just how a first person open world should be done, that along with puzzles, which makes the game far more interesting.

My final verdict, The Witness is a great puzzle game if you want to satisfy yourself after 40 minutes of trying and trying on a particular puzzle, because this game delivers just that, satisfaction after solving one puzzle. I will rate this open world never-seen-before puzzle game a 7 out of 10.

Let me know what you think about The Witness in the comments. How you liked the never ending puzzles in the beautiful open world island.