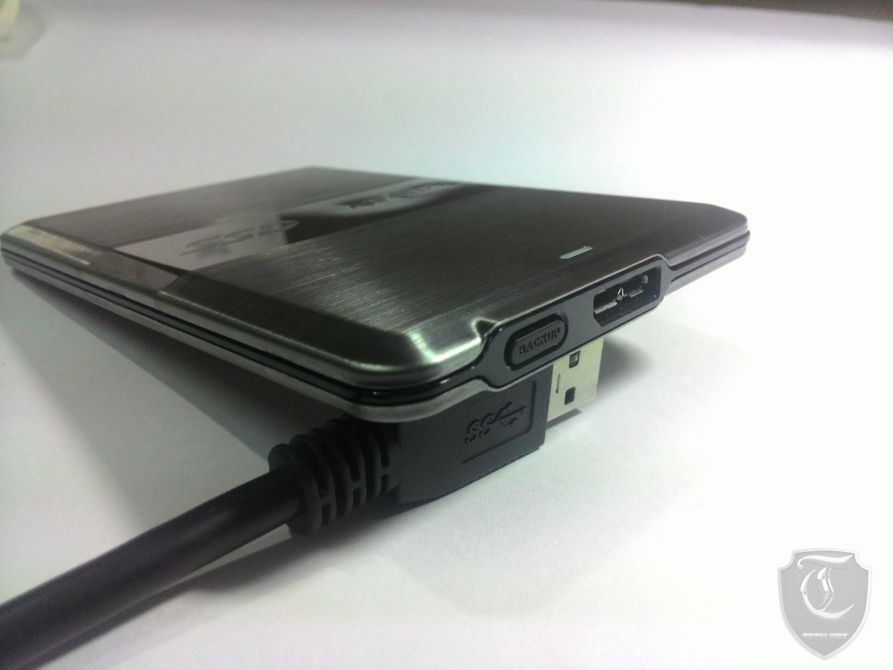 Today we have an interesting product with us, a portable SSD form the stable of ADATA.

Its extremely well built, has an LSI controller and fits in your pocket. 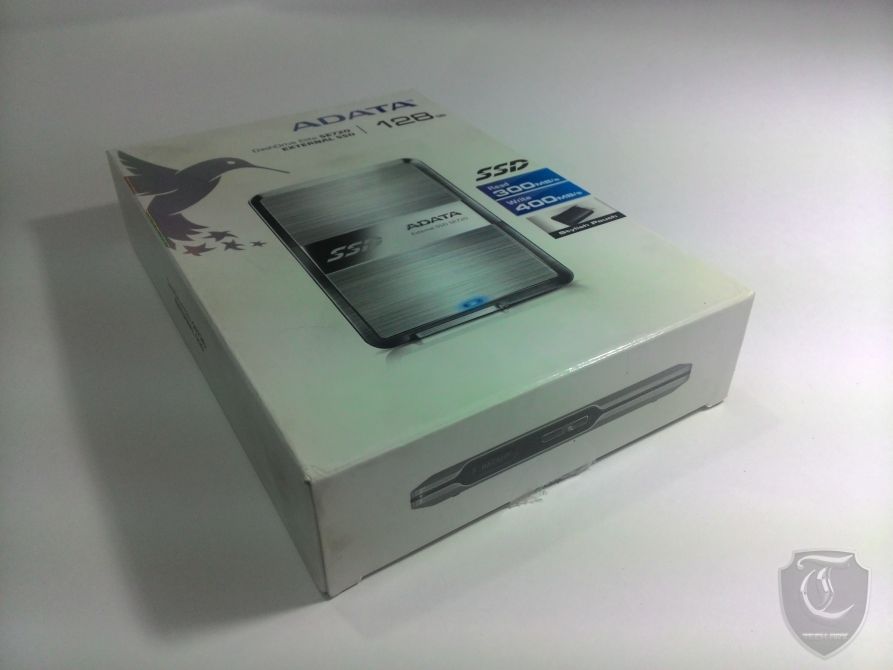 The sample we received was of 128GB capacity, even though there was a rumor of a 256GB releasing it, it never came out.

Looking at the packaging, we can see performance listed at 400MB/s read and 300MB/s write. The ssd comes with a 3Yrs Warranty as well as software’s like HDD2Go, OS2Go, and full Windows 8 compatibility. 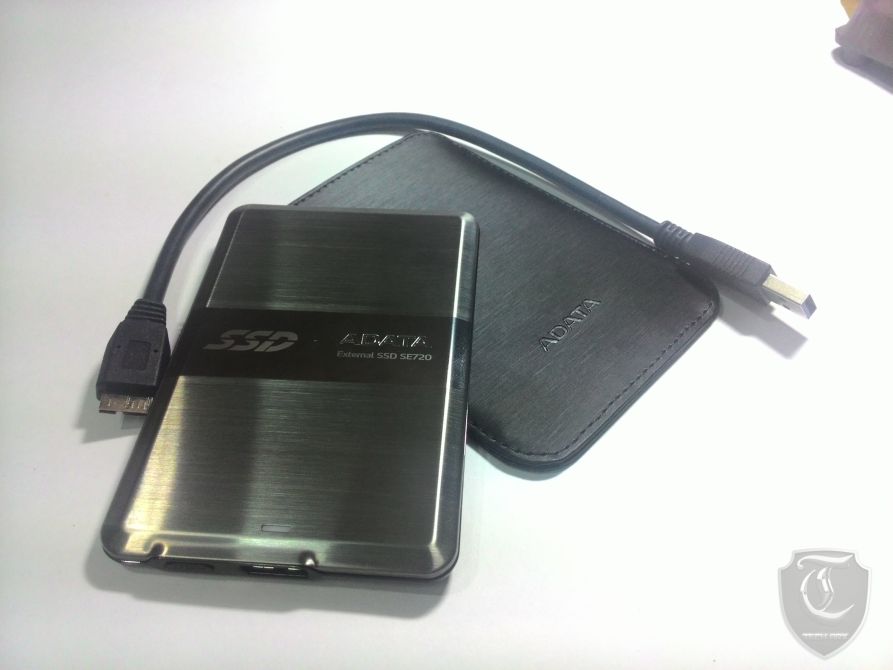 The SSD comes encased in 9H caliber scratch resistant stainless steel with brushed finish. The package includes SE720, a USB3.0 cable, instructions as well as a cover for the drive itself.

looking form a side view it seems like the RnD guys in ADATA have sanded the case by hand to make it so thin.It is only 8.9 mm thick, has a backup button as well as a USB3 SuperSpeed port, data backup is eqasy as long as you have the necessary software installed and data directory listed.

On the front side we can see the controller chip

on the back side we see eight Intel’s MLC synchronous 25nm NAND flash memory, each being 16GB in capacity for a total RAW storage 128GB.

One of the finest tools available to measure storage performance is ATTO. The great thing about ATTO is that we can test with predefined block sizes. So we can test with a 32MB sequence of 4KB files, yet also 32MB in 1MB files. This gives an opportunity to test with various file sizes.
This benchmark is a preferred among manufacturers as ATTO uses RAW or compressible data and, for our benchmarks, we use a set length of 256mb and test both the read and write performance of various transfer sizes ranging from 0.5 to 8192kb with a ques depth of 4. 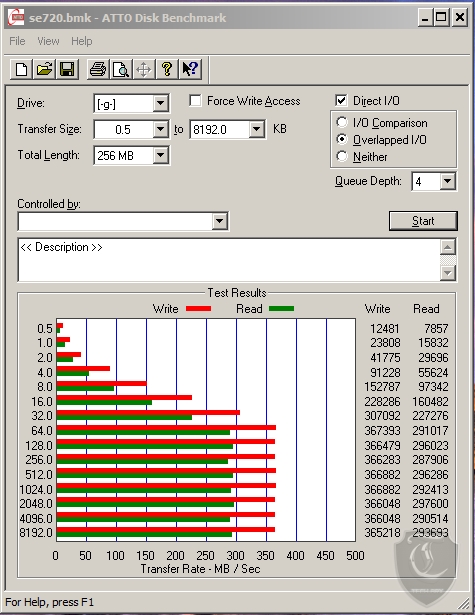 The drive performance peaked in at around 360MB/s write and 290 MB/s read mark.

Crystal Disk Benchmark is used to measure read and write performance through sampling of highly compressible data (oFill/1Fill), or random data. Crystal DiskMark scores usually drop a bit when comparing to ATTO and this is the result of the testing data now being primarily incompressible representing movies, music and photographs. 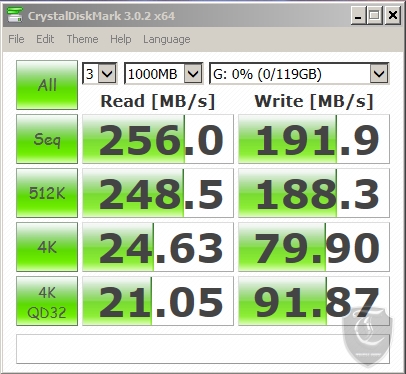 The sequential speeds seems a bit low but that could be due to the reason we tested with the default settings fo random data samples.

Added to the benchmark suite is this nice little German application called AS SSD Benchmark. This test gives an extensive result set. The test is popular, so I included it.AS SSD, for the most part, gives us the worst case scenario in SSD transfer speeds because of its use of incompressible data. 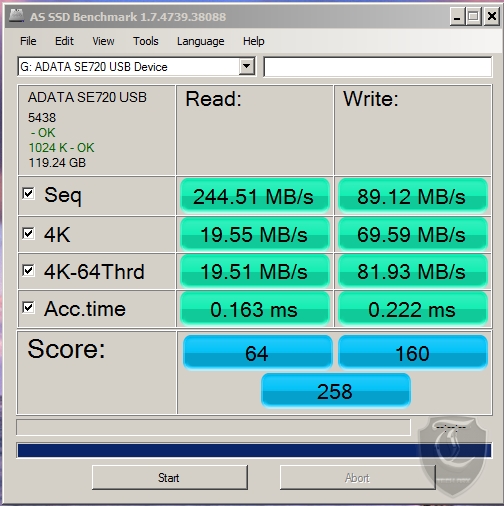 HD Tune Pro is a hard disk utility and benchmarking utility for Windows. This tiny application allows you to scan your hard drives for errors or take a deeper look at several performance figures coming from the storage unit.

We used the included benchmark utility. 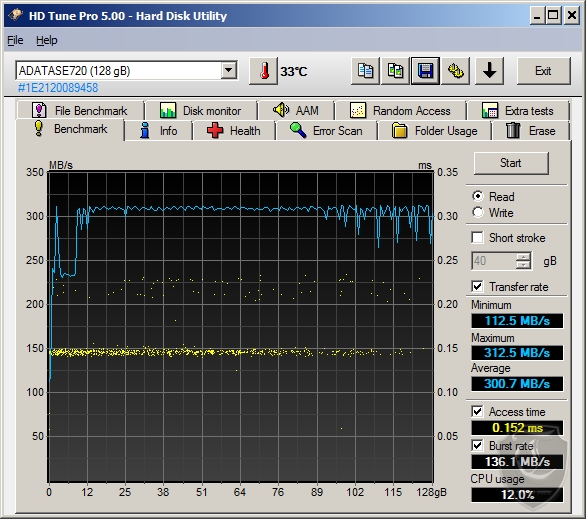 Overall through out tests we see rather impressive speeds despite the SE 720 being a portable drive. While we haven’t achieved the rated speeds in the package ( something we would investigate further), there no discounting the fact that the ADATA SE 720 is a very unique and innovative product.

The price remains a bit of a sore thumb though at around RS 60/GB(if we consider the average street price of 7600INR) but then again we cannot discount the fact portability comes at a price specially something as exotic as this, adding to the fact that there is currently NO known alternative of this product in the Indian market.

Overall a solid 8/10 from me, just the price needs a bit of adjustment to somewhere around Rs 50-55/GB.