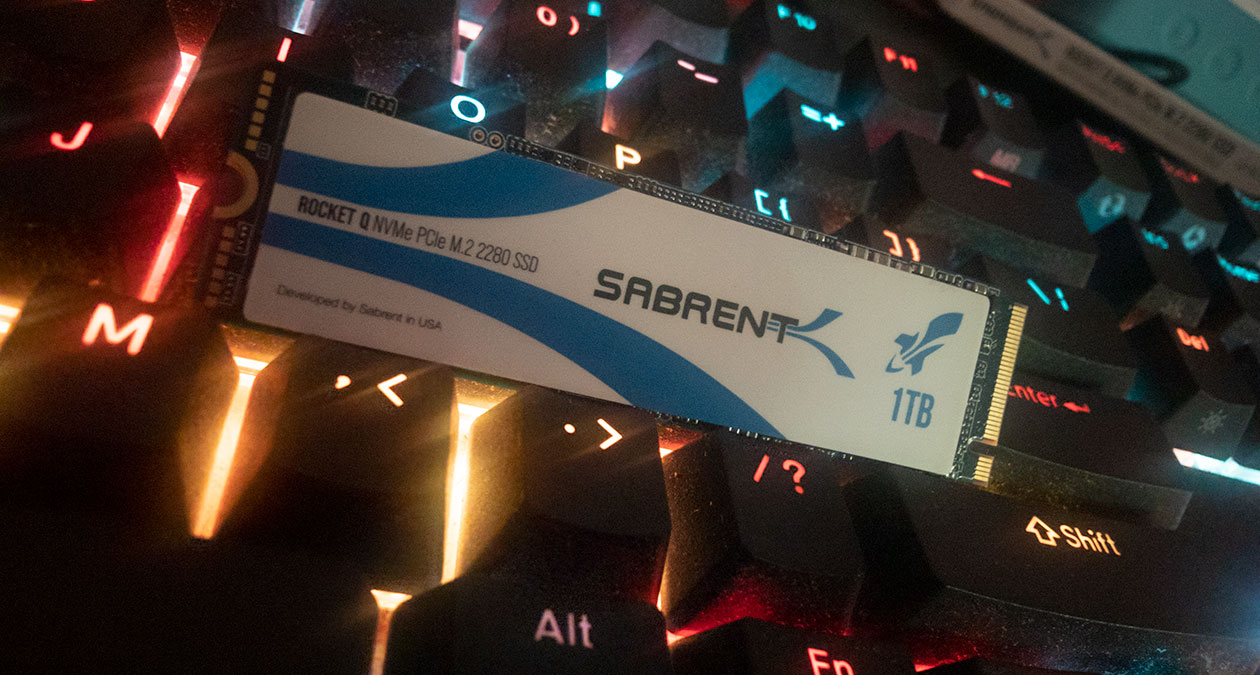 With the increasing demand of speed in the market, SSDs in the current scenario has become pretty relevant and almost close to a necessity these days. One of the most recognized names in the same space is Sabrent.

Sabrent is a relatively new entrant in the SSD niche which has been making waves lately with their products. Today we have one of their popular product on our test bench. The Sabrent Rocket Q 1TB NVME SSD.

Under the hood…erm…..sticker come heatsink of the Rocket Q lies the Phison E12S controller paired with Micron 96-layer 3D QLC flash. Apart from pseudo-SLC caching to improve performance the SSD also has a DRAM cache chip to avoid performance issues. Sabrent is offering the Rocket Q in capacities of 500 GB($70), 1 TB ($120), 2 TB ($250), 4 TB ($850), and 8TB ($1509) with a 5-year warranty so your purchase stays safe for some time. We have received the 1TB SKU for review from Sabrent.

The drive uses the M.2 2280 form factor, which makes it 22 mm wide and 80 mm long. Like all of its counterparts, the Sabrent Rocket Q connects to the host system over a PCI-Express 3.0 x4 interface.

Coming to the components side of things, The sticker on the Rocket Q doubles up as a heat spreader. On one side of the PCB, you will find the controller, four flash chips, and the DRAM cache memory, the other side gets populated as the capacity goes up to 2TB and beyond.

Going a bit deeper on the components, the SSD is driven by a Phison PS5012-E12S-32. This controller uses eight flash channels and is produced on a 28nm TSMC process. The E12S is physically smaller than the E12, works with half the DRAM capabilities of the E12, and uses a metal casing which helps in thermals. The QLC chips are made by MICRON, built using 96 layers. The DRAM buffer is provided by a Kingston 256 MB 1866 MHz DDR3L chip. The size is probably a cost optimization by Phison, in my opinion, it shouldn’t have too much of a detriment in day to day uses unless your workload consists of copying large single files.

We ran our usual storage benchmark suite which consisted of mixed workloads.

Atto Disk Benchmark
The great thing about ATTO is that one can test with predefined block sizes. So, we can test with a 32MB sequence of 4KB files, yet also 32MB in 1MB files, providing an opportunity to test with various file sizes. This benchmark is preferred among manufacturers as ATTO uses RAW or compressible data and, for our benchmarks, we used a set length of 256mb and tested both the Read and Write performances for various transfer sizes ranging from 0.5 to 8192kb with a user-selected queue depths.

We ran ATTO in both with write cache enabled and bypassed, the results were minimal in this case

AS SSD benchmark Suite
This nice little German application gives an extensive result set. The test is popular, so I included it. AS SSD, for the most part, gives us the worst-case scenario in SSD transfer speeds because of its use of incompressible data.

Anvil’s Storage utilities Benchmark
Anvil Pro or Anvil’s Storage Utilities[Depending on what you’d want to call it] is an ‘all-inclusive’ storage utility that allows testing transfer speeds as well as IOPS and lets the user tweak and adjust to find just the right mix in their testing medium, the IOPS tests being fully configurable with preset testing scenarios for read, write and mixed IO. The Benchmarks menu includes an SSD test, Endurance Testing, and 3 pre-configured IOPS tests.

HD Tune
HD Tune Pro is a hard disk utility and benchmarking utility for Windows. This tiny application allows you to scan your hard drives for errors or take a deeper look at several performance figures coming from the storage unit. We use the included Benchmark utility tool to our hearts’ content, because why not?

Overall, the drive expected in accordance with its advertised capabilities.

CRYSTAL DISK Benchmark
Crystal Disk Benchmark is used to measure read and write performances through the sampling of highly compressible data (oFill/1Fill), or random data. Crystal Disk Mark scores usually drop a bit compared to ATTO, and this is the result of the test data now being primarily incompressible – Mostly movies, music, and photographs. We tested the drive with multiple data sizes ranging from 500MB to 1000MB.

We used the Sabrent as both as a storage disk and a system disk during our reviews, and it left us pretty satisfied. This is a very cost-effective SSD for all read-heavy workloads (almost most consumer activities including gaming). The usage of QLC flash lets this drive achieve an unbeatable value for money ratio.

On the thermal side of things, its a mixed bag since we dont have a bulky heatsink. However, the throttling mechanism is balanced so that you dont feel the slowing down. You can write at 1.4 GB/s constantly without thermal throttling, while the drive will normally write at 1.7GB/s and will dial down to 1.2GB/s if it senses overheating.

Finally, at a price point of $120, you can’t really beat the pricing of the Sabrent. The only other competitor is the Crucial P1 which comes at around $15 cheaper. The P1 has better average performance, but the Rocket Q has the better SLC cache which will help with bigger workloads. Overall the Sabrent Rocket Q is a very well rounded SSD with a price and warranty to match. A must buy in our opinion.

A much deserved Silver from TechARX.