Indies are a trend now. Every small developer with limited production value can work on an Indie title and make it big. So today, we take a look at the newest Indie title to enter our gaming dungeon titled “I want to be a human”.

Developed by Sinclair Strange and published by Rising Star games, “I want to be a human” is a side-scrolling and action-shooter-platformer hybrid with pixelated gore, dark humour, tons of things going on in the background added with flashing lights and a beautifully crafted soundtrack by Jimmy Urine. The game starts off with a simple menu screen showing the playable character smiling like a maniac. The menu consists of Story, Challenges, Extras (Containing unlockable collectibles, pieces of music etc.), the Options menu and the mandatory Quit option. 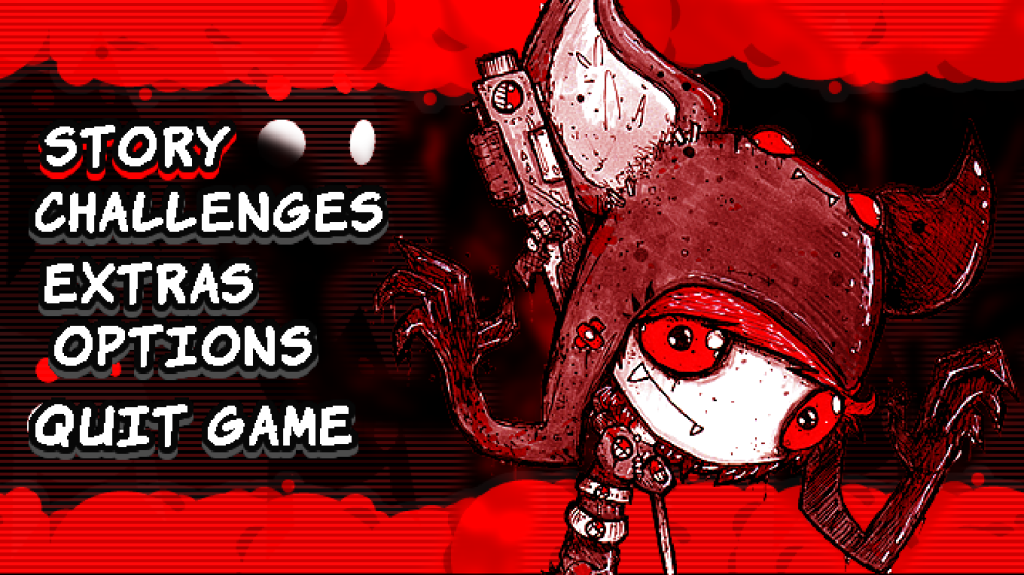 I also took a bit of a look at the options menu out of curiosity and it was quite simple (Which is quite expected from an indie game). It consisted the master volume which allows you to control the in-game volume, Keyboard setup which shows us the control (Again quite simple), and language(s). And that is that for the menu.

Now, back to the game. The story follows a “couple living in a world where romance is outlawed along with Loofahs, Sandals,and Wet Wipes controlled by an evil corporation called Smile Tech”(Pretty simple plot setting ain’t it?). One night the couple were caught kissing in public and were sentenced to genetic experimentation by the corporation for finding the answers to immortality. It is at this point where the boy escapes (Or was it the girl. I don’t know, looks quite like a girl to me) armed with a shotgun and the game starts.

One thing I did quite liked about this game is the storytelling method. The game instead of approaching the motion video method instead tells the intro in a comic-book style allowing the players to go up-and-down the pages while reading the story at their own pace.

For the gameplay, well, it is quite simple to say. You use your keyboard to move in a directional path and mouse to move the crosshair and shoot. Simple right? But here is the catch. Even if the game is a side-scrolling platformer, it uses a skill system. What that means is that the game allows you to kill the NPCs using creative means. Jump, dodge or go full Rambo. The choice is yours. The more skillfully you cross the levels, the better the points. 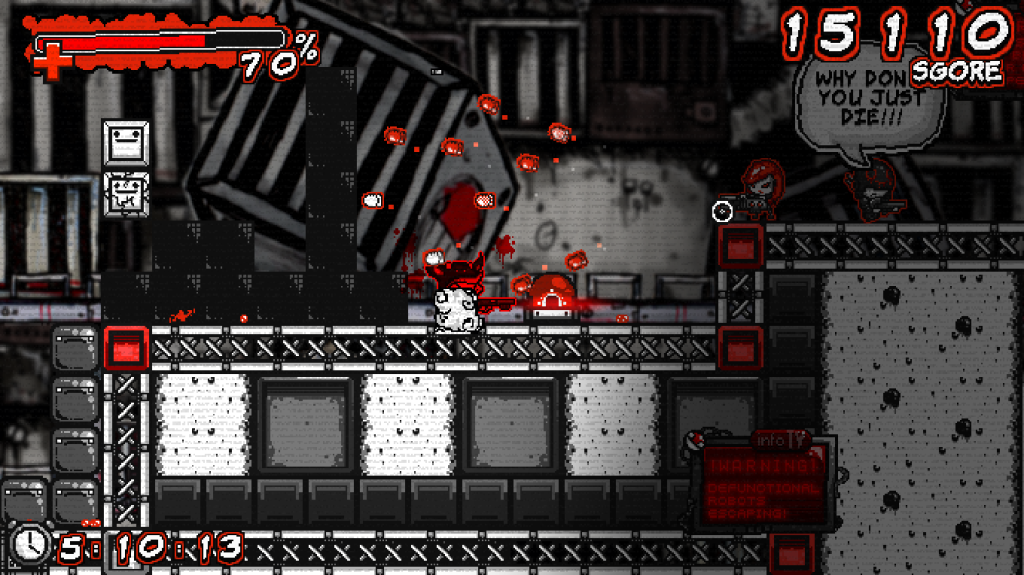 The main focal point here is the background and lighting. At points, the game would flash some really bright lights across the screen which would make it difficult to identify the enemy NPC for a fraction of seconds. Which again, adds to the difficulty spike of the game. 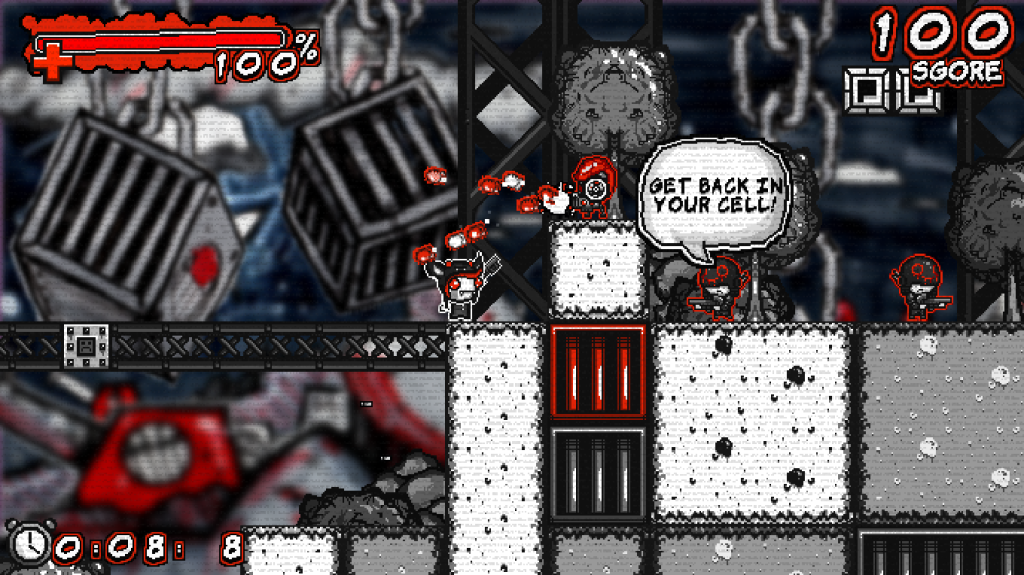 However, I did notice a small problem in this game, which I’m not sure whether it is limited to our system or is a problem of the game. At times, during the insane amount of light flash, the game goes through a dip in Frame rates for a few seconds. I don’t know, whether it is happening due to the insane amount of lights on the screen. But ignoring that, the game is quite good for an indie title. 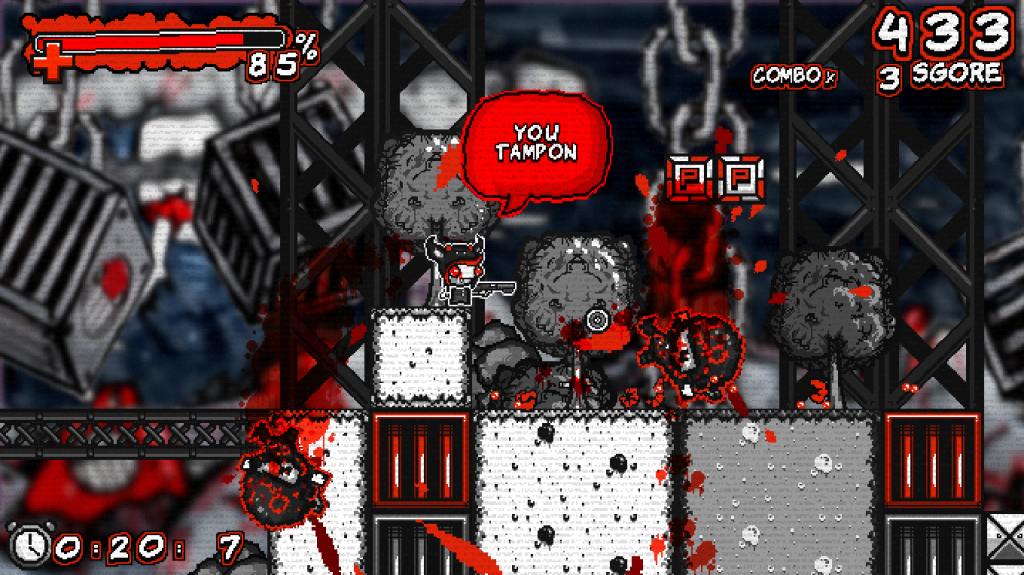 Since the start of this review, I’ve been giving quite a stress to the soundtrack of “I want to be a human”. And why shouldn’t I? I believe that the soundtrack of a game itself would make it playable? Moving on, this game has it. At times when the game gets a bit repetitive, the soundtrack itself makes it playable at those points. I hope the dev releases the soundtrack at some point because it is worth owning.