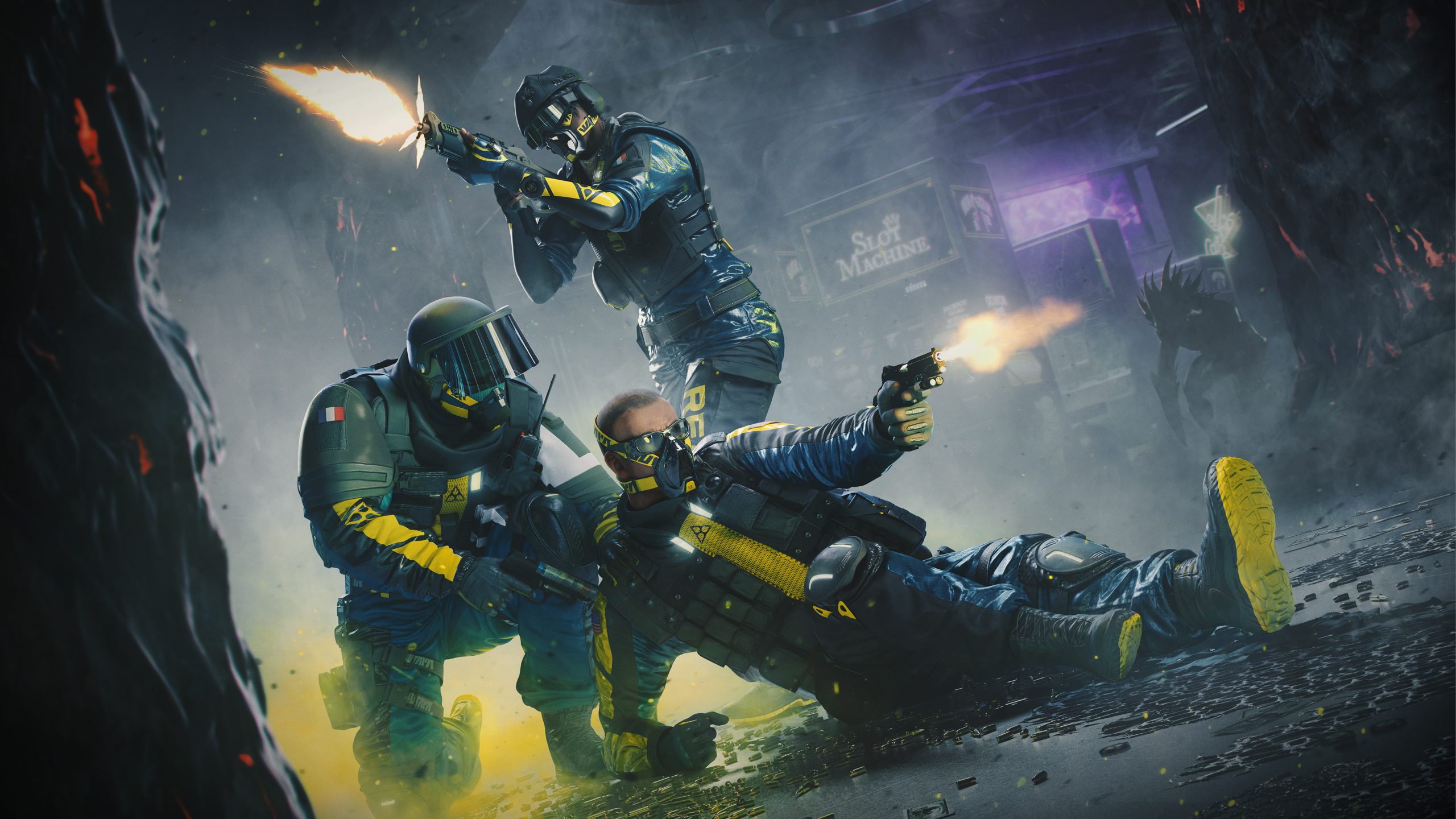 Rainbow Six Extraction is a spin-off of the tactical Rainbow Six series, that’s a far cry from the realistic and almost simulation-like gameplay the series once offered. It brings a few innovative ideas to the table while packing it all in a familiar package, resulting in an experience that’s great for both veterans and newcomers alike.

Right off the bat, the game throws a pretty well-animated cutscene displaying an unknown black organic mass attacking humans, raising the need for a special task force. After this, there’s a handful of more cutscenes that bring together to establish the lore, but there’s no traditional campaign or a story for you to follow.

Siege has always been a title attached to reality, but in Extraction, the story crosses into the science fiction territory with an alien threat.

Moving straight into the gameplay, the game feels pretty much the same as Rainbow Six Siege. In fact, it feels like there are hardly any significant changes to the mechanics of the operators, which is both a good and a bad thing. It can be good since some Siege players are already used to the basic mechanics, so they will end up feeling right at home in Extraction. Almost as if they are enjoying a new game mode in Siege.

On the other hand, some players who were expecting a fresh experience might see this as a bad thing because it’s pretty much the same. Certain people who were looking for a new experience within the same world, will be let down because this feels like the exact same thing.

I do not see any problem with this, I am one of the people who appreciate that these mechanics are maintained since it not only allowed me to quickly adapt to the game but I could also focus on the new stuff that’s added in.

In addition to this, Extraction’s mobility is perfect because it has a certain amount of weight to it. It’s important to be tactical and not overly aggressive, to survive the different scenarios. Since you’re not generally running and gunning things down, the tactical pacing adds to the tense atmosphere.

The game is brutally difficult at the start and punishes you quite severely for your mistakes. Escape a mission with less health and your operator is going to be unavailable for the next expedition. Completely deplete all your health and your operator will have to be carried over by a buddy, otherwise, you will not only lose all that XP but your operator is going to go MIA and will have to be rescued later on in order to make them playable again. This punishing gameplay loop means that you have to carefully plan your way through each mission and avoid drawing unnecessary attention. This is a stark difference from the other zombie shooters in the market that encourage you to go gung ho against hordes of enemies.

The different maps also feature the same destruction mechanics we have already seen in Siege, but the parasites add completely several new mechanics. These new additions to the game bring with them several additions to the gameplay which not only add difficulty but also completely change each level up. From gas traps to nests that produce enemies and pollution that slows down the movement of operators.

Despite not featuring the full roster of Siege, Extraction still has a pretty decent amount of available operators. Some of their abilities are more suited in the world of Extraction like Rook’s armor plates and Doc’s healing. While others feel a bit less natural. You can level up each of your operators and unlock permanent upgrades to make things easier. There’s a really nice sense of progression in the game and quite a lot of unlockables that you can spend your hard-earned XP on.

Once you master these mechanics, however, it’s bloody satisfying to successfully chain together multiple objectives and extract with a huge amount of XP. The gameplay features enough dynamic elements to make things just enough different. Most of these work well to give the game a unique identity and above all, provide much-needed variety to the missions.

This brings me to the inevitable monotone nature of the late game and repeatability that plagues titles such as extraction. The game presents several levels, which take place in different cities of different aspects. In each level, there are several objectives that you can perform.

At first, there’s quite a lot of variety to these missions, which include tense operations such as rescuing an operator, rescuing a civilian, scanning certain areas maintaining position in one place, getting samples of swarms, and finding certain devices. But inevitably you’re going to end up seeing everything the game has to offer in 20 or 30 hours, and there’s nothing to do except mindlessly grind through the levels and waiting for new content to drop. There are higher levels, sure, but they hardly change the gameplay except making certain enemies more bullet spongy. The lack of variety in enemy design doesn’t help either.

Some people might have no issues with the amount of repeatability but for others, this is going to be a concern. Especially since Extraction lacks the unpredictability that human opponents bring, and there’s only so much variety an AI can offer. A PVPVE or even PVP mode with these new mechanics could have avoided this issue, but as of yet, it seems this is not on the table.

Finally, I want to emphasize something important about Rainbow Six Extraction: the game is completely designed to be enjoyed in co-op. Even though you could probably succeed in clearing some of the missions solo, I don’t recommend it at all, and you will end up feeling bored quickly.

It’s an absolute blast to play this game with friends and I highly recommend at least matchmaking if you don’t have people willing to play with you. The experience of surviving and completing missions becomes more exciting when you are doing it with others.

From a visuals and audio standpoint, the game is pretty good and features some solid visual designs. The audio was already pretty good in Siege and this has carried over pretty well to extraction as well. Finally, performance-wise, I had no complaints as well, and the game easily gave me 60 FPS maxed out at 1440P on my 2070.

If this game ends up receiving even a fraction of the support Siege received from the devs and the community, I know that this game will be providing entertainment for years to come.