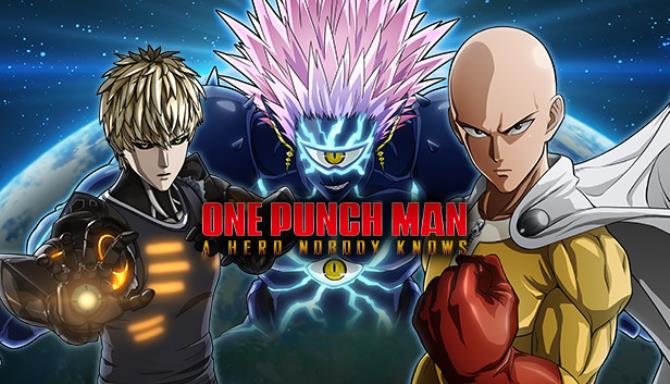 It’s really hard to translate a very powerful character or as fans of anime and gaming like to call it an OP(Overpowered) character into video games. Designing the power dynamics and keeping things “fair” against someone who is god tier in terms of raw power is a hard job. Saitama is probably one of the very few characters in modern media who is the very embodiment of the word “overpowered”.

The protagonist of One Punch Man, Saitama is quite literally a one punch man, dispatching his enemies in a single punch and the anime has been an instant hit since it’s release.

So when Bandai Namco announces a game based on this guy, it kinda raised my interest, and I’m sort of impressed. One Punch Man: A Hero Nobody Knows is a really fun basic arena fighting game that does a few things to set it apart from the competition, but unfortunately does not manage to punch its way to greatness.

Story and world-building in fighting games have really become an afterthought but One Punch Man: A Hero Nobody Knows does a fairly good job of handling the huge cast of characters.

The Story of One Punch Man: A Hero Nobody Knows is primarily focused on Season 1 of the anime, but from the perspective of your custom character. You start off doing menial jobs and beating trash bad guys for the local Hero association branch before moving up the ranks to bigger missions and more badass enemies.

The story often overlaps with arcs from the anime, and you end up meeting almost all of the major characters who can then be added to your roster. This includes Genos, Silverfang, Tornado and of course Saitama.

Dialogues can get pretty funny and the voice acting is mostly well done but very minimal. But the cast does a good job of keeping the story flowing.

First off, as I said A Hero Nobody Knows does a couple of things differently. The first being is adding in the disasters that take place in the anime/manga to spice things up gameplay-wise. Occasionally during fights, you will be alerted to special events, that can range from meteors falling from the skies to demon level monsters turning up. These events can go your way, letting you lure your opponents into the damage zones or if you aren’t quick enough these events can mean a KO.

The second most significant twist in the formula is Saitama himself. If you enable him in 3v3 battles, Saitama can swoop in and pretty much end the battle right there. The disadvantage here is that you will have to manage with two heroes instead of three until Saitama arrives, and it will be a long time before he does.

Most of the core gameplay is like any standard arena fighting game, you have normal attacks, strong attacks, and Special attacks which are known as Killer Moves. You can block, dash and jump yourself around the 3d arena, punishing opponents with a quick dodge or position yourself better in case a disaster event starts.

Since the game does have some RPG elements, it cleverly uses the lore to introduce Hero classes as levels, giving you a very rewarding reason to level up your character. I really enjoyed the journey of my hero from the lowly C class Sneaker to the indomitable Fish Head. You can also befriend popular heroes from the anime and learn Killer moves from them.

Shops allow a fair bit of customization for your character and you can create some crazy characters. Certain clothing sets also give bonuses and you can even decorate your own room after unlocking it.

Where the gameplay really suffers is in terms of mobility. The game feels very clunky which is a huge negative for an arena fighter and the controls felt very stiff and often unresponsive.

The game looks good and does a great job of representing the colorful world of One Punch Man. The cell-shaded visuals make the characters look great and faithful to the original style.

The arenas, however, feel bland and boring, and really a missed opportunity. Some of the locations are pretty good looking but most of the time its the same concrete block. The overworld also feels uninspired and dead, which is a shame because the game really nailed the feeling of the anime and I would have loved to explore even a tiny bit of that world.

The performance is also a bit of hit and miss, the game mostly runs at 60 FPS but it really fluctuates in the overworld. Pop-ups also ruin the experience.

OST and sound design is pretty good. The voice acting is dubbed, and there’s no option for a Japanese sub, so that’s disappointing but still the dub is really well done.

One Punch: A Hero Nobody Knows is a fun game that suffers from some very mediocre elements. The fighting is good and well animated but it suffers from mobility issues which is a big negative point in fighting games. The fluidity in gameplay is also hampered by the occasional frame drops and bland environments. What the game really does well, however, is bringing the huge cast of characters from the anime to life and incorporating some really cool gameplay elements like how Saitama works as well as the various disasters.

This game is a fan’s dream come true and I had some pretty awesome moments with this game despite its flaws.