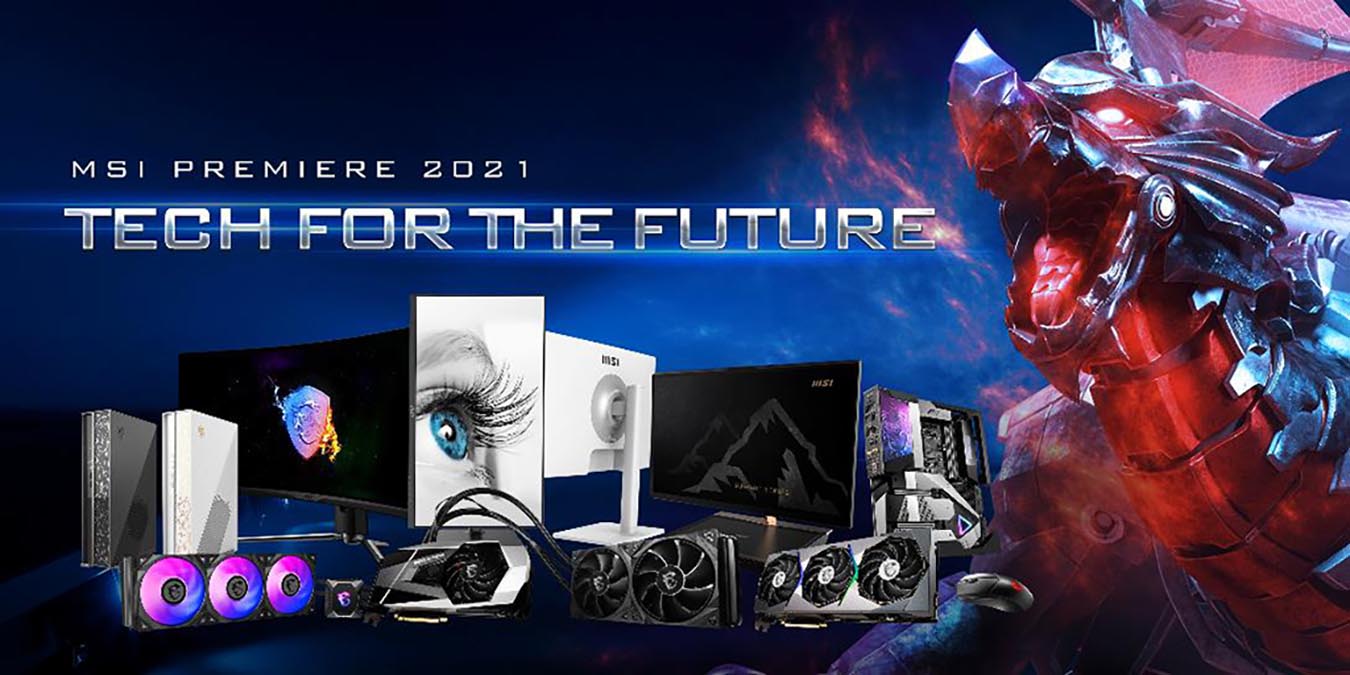 MSI unveils an innovative lineup of gaming, creator and business products at its virtual launch event, “MSI Premiere 2021: Tech For the Future”.

MSI unveils an innovative lineup of gaming, creator and business products at its virtual launch event, “MSI Premiere 2021: Tech For the Future”. The event opening was featured by a powerful MSI Dragon G, followed by a helicopter that flew over the sea and revealed MSI RTX 3000 SEA HAWK.

The SEA HAWK Series will bring amazing cooling solutions to the RTX 3000 Series lineup by MSI by combining liquid cooling with traditional air cooling for the GPU. A great solution for enthusiast consumers.

As the helicopter flew over snow-covered mountains, MSI’s GeForce RTX 3000 SUPRIM Series appeared on a peak.

The RTX 3000 SUPRIM Series will be cooled with TRI FROZR 2S cooling system and maintain a modern aesthetic that reflects a high-performance and modern design.

The stage then turned into a diamond textured theme to bring out MSI CLUTCH GM41 LIGHTWEIGHT mouse.

MSI also launched SSDs for the first time at this virtual event, designed to deliver storage up to 4TB, read speeds up to 7000 MB/s, and write speeds up to 6900 MB/s. Protect your important data with Mean Time Between Failure of up to 1.6 million hours and end to end path protection.

Shortly after, the Goddess ARTYMIS arrived and sent her moon-shaped arrow through the dark, lighting up the MPG ARTYMIS Series. Named Ἄρτεμις” in greek mythology, she is also known as the goddess of the moon, Luna, and the goddess of the hunt. When hunting, she wore a silver bow and rode a silver cart pulled by a female deer with golden antlers — an image as majestic as the waning and waxing moon.

Soon after, the stage floor transformed into a motherboard with an electric stream flowing through, uncovering the latest Intel Z590 MEG series.

MSI’s flagship Z590 model, the MSI MEG Z590 GODLIKE uses a new fresh metallic inspired design throughout, with a black PCB, black and silver styled armor, with its Dynamic Dashboard II OLED panel as wen are moving away from RGB to integrated displays in products.

Then, a glowing RGB wave slid over the screen and presented the MPG CORELIQUID K360 AIO liquid cooler.

The radiator is cooled by MSI’s TORX FAN 4.0 which creates great airflow and air-pressure for rapid cooling.

Additionally, a 60mm TORX FAN 3.0 is implemented within the water block, providing concentrated cooling also the water block has a 2.4″ LCD, capable of displaying crucial information and customizable graphics.

In the spirit of creation and business innovation, the MSI Creator P50 made its debut with a kaleidoscope of butterflies vividly fluttering their wings.

The MSI Creator P50 is a content creation desktop with a professional and stylish aesthetic. Although it is only 5 liters in volume, this creative center packs a big punch. It supports Intel Core i9 processors and the latest graphics card. It also has Thunderbolt 4, which delivers the fastest speed ever and makes 10 GbE LAN possible with the smoothesaat, fastest creating experience.

Expanding to the business market, MSI launched the MODERN MD SERIES professional monitors. The Modern MD271 and MD241 Series come with MSI’s Anti-Flicker and Less Blue-Light technology, both TUV certified and designed to protect your eyes.

The series’ ergonomic design also allows for personalization and customization for a comfortable viewing experience. The built-in Type-C and tool-free design allow users to effortlessly connect and charge, and assemble or disassemble for a VESA mounting environment.

It is not only the first All-in-One PC with a switchable monitor design, but it also has a pre-built smart sensor that detects everything in your environment, ranging from distance and human movement to environment lighting. The smart sensor automatically adjusts the brightness and other screen settings for the most comfortable and optimal viewing experience.

Lastly, MSI announced the new MSI Center, merging the Dragon Center and the Creator Center. The new MSI Center is fully customizable, supports all MSI devices in both the gaming and creator product lines.

“As a globally recognized, leading brand in gaming, creation, and business, we will continue to give you the best lineup of products while enhancing the user experience in all aspects,” said Sam Chern, MSI Marketing Vice President. “We will be releasing exciting news in the upcoming days. Stay tuned, take care and see you soon.”