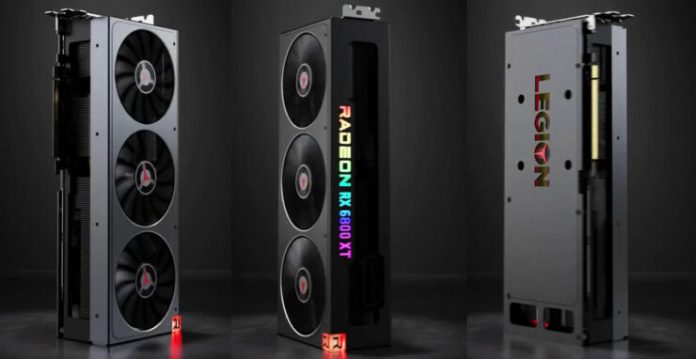 Lenovo and AMD seem to be developing an exclusive partnership with client/workstation products. After Lenovo making workstations powered by the Ryzen Threadripper PRO processors, they seem to be working on graphics cards. Pictures surfaced on Chinese social media of the new Lenovo Radeon RX 6800 XT and RX 6900 XT LEGION Edition graphics cards. Right now it’s unclear whether Lenovo designed these cards, or if the designers of AMD’s reference MBA (made by AMD) graphics cards lent a hand.

Looking at the red-illuminated “R” cornerstone design element, it seems the design is made by the same OEM as reference-design MBA cards. The use of the “R” cornerstone can be seen in the older Radeon VII. The typeface of the “R” has since been updated to match with the latest Radeon logo. we also see a large “Radeon RX 6×00 XT” logo along the top of the card, which is ARGB illuminated. The large triple-slot card appears to be slightly larger than the RX 6800 XT / RX 6900 XT reference-design, pulling power from a pair of 8-pin PCIe power connectors. Along the metal back-plate, we see a large, illuminated logo of Lenovo’s LEGION Gaming. Below are some screenshots from the animation, watch the animated GIF in the source link below. At this point we don’t know if this card is China-exclusive, and exactly how it’s marketed, whether it’s sold standalone like any AIB retail card, or whether it’s pre-installed on LEGION PCs, such as the 2021 LEGION 7000P desktops.