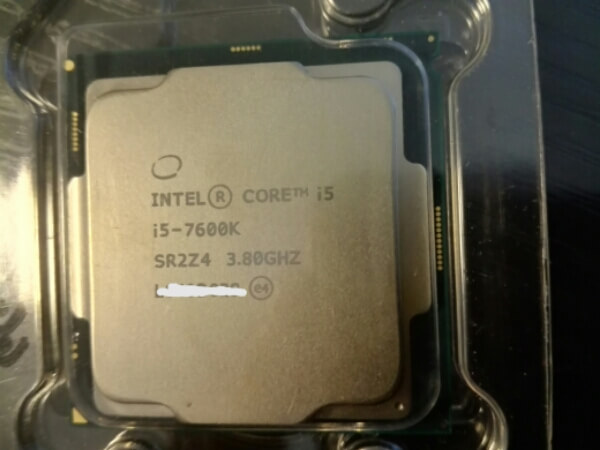 Back in August the Intel Kaby Lake lineup info was leaked by Chinese sources. Now with its launch coming near we spotted one convincing picture of the Core i5 7600K in the Wild courtesy the good ol Chinese forums.

While people may doubt the authenticity of the picture. But the Chinese forums has provided authentic info so far.

The Core i5-7600K is a 4 core chip without multi-threading support. This chip has 6MB of L3 cache and 95W TDP. Base clock is 3.8GHz and is capable of boosting to greater than 4GHz.

The Kaby Lake desktop processors will release early 2017 although the corresponding Z270 chipset motherboards might come out before that.

These are of unlocked design built for overclocking. The flagship being the Core i7-7700K featuring 4 cores, 8 threads and 91W TDP. This CPU is clocked at 4.2GHz which can boosted to 4.5GHz, features 8MB of L3 cache. Next in line is the Core i5-7600K, which we discussed above

There are also some T variants of the chips, which represent low power usage. The TDP is set to 35W for use in low power systems. More information is as follows

We will keep updating this post as we get more information.