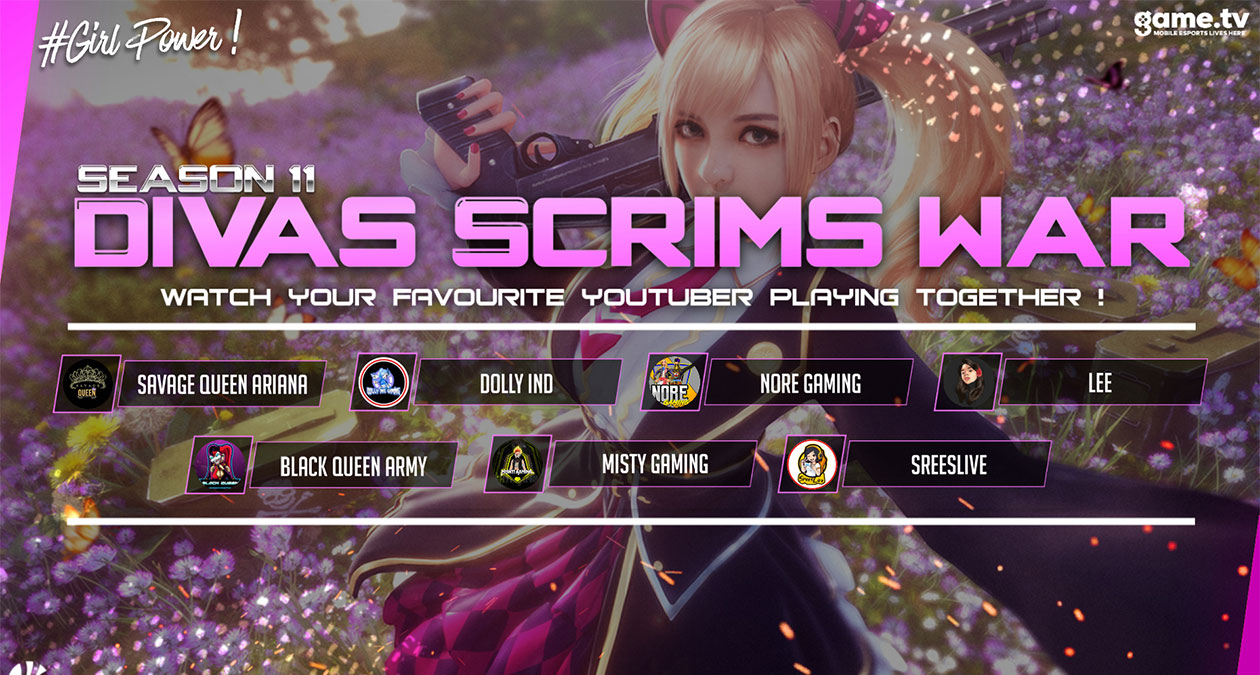 Game.tv, the AI-powered Esports Tournament Platform, has announced a unique women-only tournament, Diva Scrim Wars to assist and support emerging female players in India’s gaming and esports space. Diva Scrim Wars is one of 8 unique community based tournaments by Game.tv which was developed with the understanding of the growing female gaming community and strong player base in India.

Game.tv Diva Scrim Wars (Free Fire) was created with the sole purpose of engaging and empowering the growing female gaming community in India by hosting a weekly set of tournaments with prizes ranging from INR 2,000-20,000 every week. The matches will be broadcast live on popular female YouTuber channels, such as TenQueenGaming, SreesLive, DollyindGaming, BlackQueenArmy and many more, to further activate and promote female content creators in creating awareness for the tournament.

Commenting on the announcement, Rosen Sharma, CEO Game.tv says, said, “Indian mobile esports segment is already set for a massive expansion with rising popularity of mobile esports. We are witnessing increased traction from female casual gamers especially for games such as Free Fire. The tournament allows for improvement in several areas within the gaming ecosystem. Aside from encouraging more female participation in gaming and esports events, it also aims to offer financial support through weekly prizes while allowing opportunities to both male and female shoutcasters. In its 13th season of the tournament, we are well positioned to cater to a larger user base willing to participate from the country.”

Commenting on the initiative, gamer Nadira Neysa (player name, Sherni) says, “The Divas scrim war was a unique experience for me as there was no other tournament or event happening in Free Fire made specifically for female gamers. It’s been a great event. I’m looking forward to many more events from Game.tv and am already excited to show my talent there.”

All matches are live streamed on YouTube currently and will eventually have multi-platform streaming. There are a total of 09 events scheduled. The next tournament is taking place on 08th November 2020. For more details, download Game.tv app at https://bit.ly/32OZ1sQ

Game.tv is an AI-based esports tournament platform headquartered in Silicon Valley with a team across 20+ countries including Korea and Japan. Game.tv is led by gamers with strong track records of building mobile games and growing the mobile esports fan and player base. The company’s core product is Tourney, an AI-powered esports assistant that can run tournaments from start to finish. Game.tv was founded in 2018 and is backed by blue chip investors and partners around the world, including Intel Capital. Tourney is currently available for over 60 games, and more games are being added weekly. For more information, visit https://www.game.tv/

CriticalX Esports Solutions Pvt. Ltd. is an all-encompassing Esports Events & Marketing Agency that was founded in India in the year 2018 by a team of experienced professionals from within the Indian gaming industry. The company focuses primarily on Studio Grade Esports & Sports Production, Community Management, Event Production & Content Development for the Gaming & Esports genre.