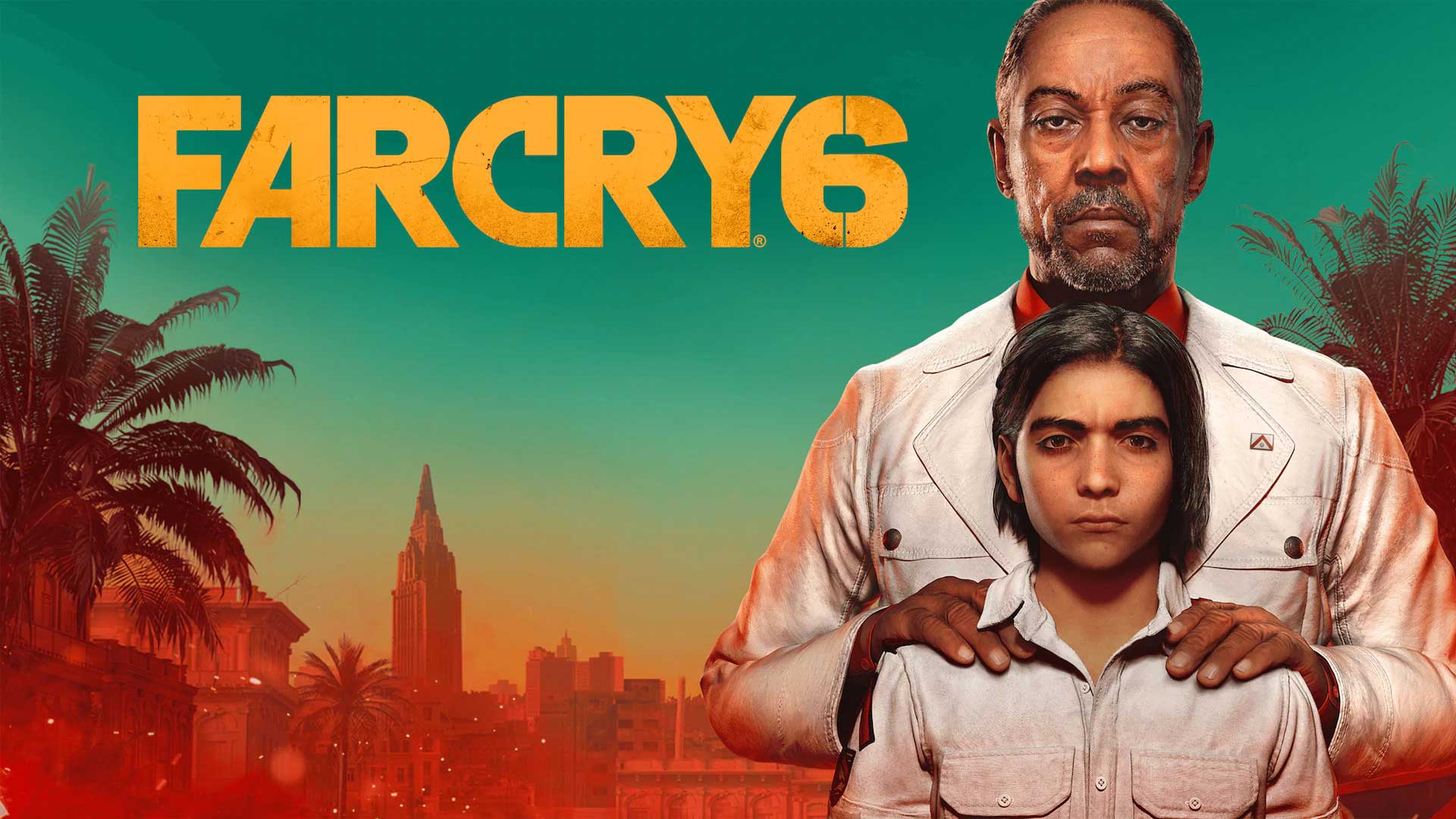 Far Cry 6 is the latest entry in the franchise that takes players on an action-packed over-the-top adventure once again, as they take down another dictator one outpost at a time. Far Cry 6 introduces some changes to the long-running formula, that results in a familiar but fresh experience but are they enough to help this game reach the heights that Far Cry 3 or 2 achieved? Let’s find out.

There cannot be a Far Cry without it being set in an exotic land under the regime of a tyrannical maniac. This time we have the Yara region, a tropical island that is inspired by Cuba. You play as Dani Rojas, ex Yaran conscript, and now one man or woman guerilla army.

That tyrant is Antón Castillo, played by the talented Giancarlo Esposito. Ubisoft has taken a more grounded approach to the narrative this time around, even though there is plenty of goofiness to go around. Castillo is a far more serious and less flashy villain than previous Far Cry antagonists, preferring a cold-hearted iron grip over his regime in order to achieve his goals instead of being a pompous and flashy bastard. The narrative is filled with twists and surprises that keep the narrative from becoming stale, and Far Cry 6 does a good job of fleshing out each narrative arc well. Every supporting character is given enough screen time so that you are able to understand their motivations and what drives them.

Contrasting Antón’s cold-hearted character is his son Diego’s reluctance to follow in his father’s footsteps. The father-son duo’s relationship is anything but heartwarming but it does an excellent job of bringing out another facet of Antón’s character, specifically his role as a father.

Far Cry 6’s diverse and wacky cast of characters help the narrative from becoming monotonous when the story takes a more serious tone. Far Cry’s strength have always lied in its over the top homicidal stories, and Far Cry 6 despite trying hard still fares much better when it just gives in to the absurdity.

Far Cry 6 is all about being a guerilla, and the game makes sure you know that you are a guerilla so that you don’t miss out on all the guerilla activities and liberate the island in a true guerilla-style. Seriously this game somehow manages to constantly throw in at least a dozen mentions of guerilla every hour I played, right from the start of the game till the end. It honestly wouldn’t be a Far Cry game without cheesy dialogues but I really wished they had toned down the whole guerilla thing.

Far Cry 6 is the first game that features truly urban environments. Sure there have been towns before, but Far Cry 6 features full-fledged cities and smaller communities. There are still plenty of lush forests and rocky terrain here, but the change in scenery gives Far Cry 6 a much-needed break.

Something else that’s different from the previous games is the switch from the RPG skill-based system to a gear-oriented system. Gone are the skill trees and traditional XP systems, instead Far Cry 6 features gears that offer passive buffs and supremos, a monstrous invention by Juan Cortez – your legendary guerilla mentor, that deserve a paragraph of their own, so I’ll discuss them later on.

A lot of skills that had to be unlocked in previous games are available from the start for Dani, making the game feel much more quicker-paced. Indeed the game wastes very precious time before setting you on the path to becoming an overpowered war machine.

A level system is still present in this game in the form of a promotion system, and you earn reputation by taking down high value targets and liberating checkposts which in turn allow you to get promoted and buy better gear. Without proper gear backing you up, you will have a hard time in the higher level areas.

As I mentioned before, supremos are a new addition to the game that offers an ultimate ability of sorts that can range from reviving you when you are downed to being able to burn every enemy near you. They also allow you to fit in additional abilities and gadgets that suit your playstyle. A stealthy guerilla might choose to equip an EMP supremo along with grenades that tag your enemies, while a guerilla with Rambo posters in his bedroom might prefer attaching artillery to his back while being able to throw dynamites and Molotovs. There’s a lot of options and freedom available to the player when it comes to allowing them to customize their playstyle.

Another change to the core gameplay comes in the form of specialized ammo for guns. While the enemies in Yara are nothing like the bullet sponge enemies you encountered in New Dawn, they are still often tanky enough to survive more than a few rounds if you don’t have the correct ammo equipped. For example, soft bullets that are better suited for unarmored enemies might have a hard time penetrating an armored soldier, resulting in you emptying an entire mag instead of being able to two shot him with armored rounds.

In a first person shooter the most important thing is good gunplay, and the gun handling here is solid, with every gun feeling unique and powerful. There’s a wide variety of weapons available here, and as Juan says, it’s important to have the right tools for the right job.

You’re not alone in this crusade for liberation, as the buddy system returns from the previous game with a more wild touch. Amigos, are recruitable companions that have their own special abilities and can accompany you on your travles. Every amigo suits a particular playstyle, and can hold up their own in a fight.

Yara is not only huge in size, but also in the amount of activities that you can take part in. Aside from the main missions, there are also checkpoints and outposts to capture on the main roads, anti-aircraft guns to blow up so that you can fly around more freely as well as a ton of other stuff to do, including my new favorite mini game – cockfighting. Far Cry 6 features a fully fleshed out cockfighting game with multiple cocks on the roster that you must find and recruit. It feels surprisingly fun and the AI does a pretty good job of giving you a good challenge on higher difficulties.

Travelling around Yara feels absolutely great and I loved finding new rides to take them out for a spin. There’s a wide variety on offer here, including horses, that can navigate offroads better than some vehicles. The vehicle handling is excellent and part of the reason why I enjoyed travelling around Yara instead of fast travelling. The other part is the absolutely unpredictable nature of Far Cry 6 that often started up impromptu chaos.

Unfortunately Far Cry 6 still ends up sufferring from a bit of repetitiveness as you cross the 12 hour mark, with you ending up covering most of the available activities, many of which have overstayed their welcome in the series in my opinion. Sure a lot of the clutter has been cleaned up, but considering the running time of the game, a bit more variety or challenge in the checkpoints and more unique side quests would have helped. My second complaint is that AI feels a bit dumber than previous titles at times, with them completely ignoring their comrades predicament as I slaughter through an entire barrack as well as sufferring from some pretty hilariously bad pathfinding.

Far Cry 6 will continue to recieve post launch support in the form of additonal free missions as well as a rather interesting season pass that I am looking forward to.

Far Cry 6 looks absolutely gorgeous at times, with warm sun kissed beaches, cozy towns surrounded by breathtaking vistas. I actually felt like a tourist while taking a stroll down some of the localities, and because Antón’s army normally doesn’t disturb you unless you brandish your weapons in public, I often found myself taking the time and exploring the world more.

Ubisoft has done a terrific job of creating an authentic carribean island that feels like an actual place. The wide variety of places to visit and secrets means that Far Cry 6 will do a great job of satisfying the players that like to take their time and explore the world.

While most of the cast of Far Cry 6 do a good job of playing their characters, none do a better job than Giancarlo Esposito. He brings a certain gravitas and weight to the story that would have felt lacking without him. In comparision to him, some characters often felt downright cringy and unimpressive.

And, although the game is unable to fully realise its graphical potential due to it being a cross generation title it is still a technically impressive game.

The impressive selection of licensed tracks do an excellent job of potraying the carribean culture and combine with atmosphere that Ubisoft has managed to craft, results in a truly immersive game.

The game runs surprisingly well on the PS4 and manages to look pretty good as well, although you will have an obviously far superior experience on the PS5.