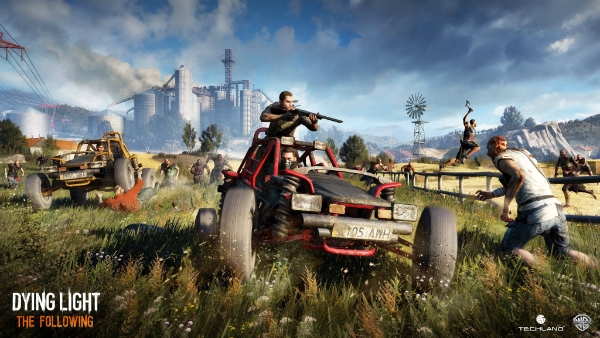 Gamers have always been keen on cutting and blowing and mutilating Zombies and recently the genre has seen a boom. Dying Light is another spawn of that genre’s golden age. Released on 27th January, 2015 through download and US Retail and on 27th February, 2015 through its worldwide release, the game saw a massive positive support, due to its hybrid gameplay system incorporating Free-flow parkour movement, First-person Hack-and-slash melee combat and gunplay and Open-world resource scavenging and survival mechanics.

Techland, the developer responsible for Dying Light, said on October 1, 2014 that the game will deliver a 50-hours worth of gameplay time including the DLCs. True to their words, Techland released ‘Cuisine and Cargo’ and ‘The Bozak Horde’ on Feb. 10th, 2015 and on May 26th, 2015 respectively. The final piece of the Season pass is coming out this February 9th, 2016, titled ‘Dying Light: The Following’.
The DLC will follow the protagonist Crane through a new storyline and new areas with new gadgets and customizable dirt buggies at his disposal.

To give us a sneak preview of the story, Techland have released a new trailer today.

Also if you want to see and learn more about the DLC, here’s the reveal trailer which actually reveals a lot about the DLC.

The DLC is priced 14.99$ for those who don’t own it and for the people who own the Season Pass for the game, they can download the DLC for free. Furthermore, if you plan on buying the Dying Light: Enhanced Edition, you will get all the Season Pass content with it.

Hope to see you in Harran again, survivor.