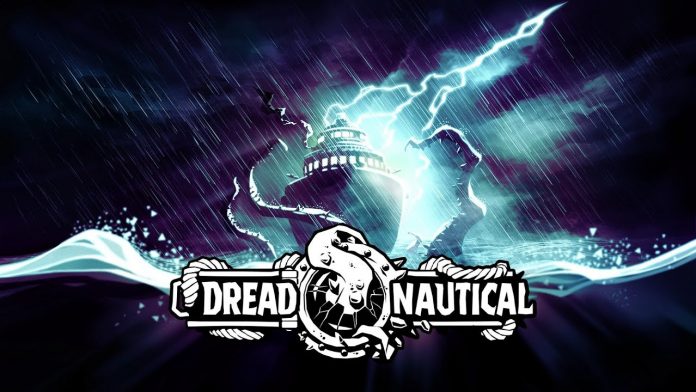 Dread Nautical is a turn-based RPG game by Zen Studios, a studio known for its pinball video games. A surprise indeed but is it a welcome one?

Featuring turn-based strategy, survival, and management mechanics, Dread Nautical is an ambitious game that tries to deliver a compelling and campy adventure but stumbles a lot along the way.

Dread Nautical opens up with quite the sequence: a cruise ship full of tourists is invaded by a mysterious force that transforms almost everyone into otherworldly monstrosities, and our protagonist awakens in this unpleasant situation with the goal of finding other survivors and escaping this madness. From the get-go, Dread Nautical wears its Lovecraftian influences openly, from the cosmic horrors to the creepy unsettling story. It does deviate from the atmosphere it so carefully tries to build up and tries to throw in some humor and wit into the mix, to various mixed results.

This tendency to combine influences results in a story that often feels poorly paced and has elements that feel out of place. I will say that the setting is very well done and do a great job of giving off that haunted ship vibe, and that is partially due to the interesting lore and script that tries to pick itself up now only to be drowned by the less impressive aspects of the game.

Mixing influences also causes the gameplay to feel very disjointed and not fleshed out. You start off the game by selecting your character from 4 different options, each of them with their own strengths, and passives. All of these characters are fully voice acted and have some unique dialogues, but the story remains the same regardless of your choice. At its core, Dread Nautical is a typical turn-based strategy game and features characteristics expected from this genre: isometric view, square movement system, action points, and abilities. There are elements of survival as well, as you have limited slots for weapons and objects and must also manage food for your survivors. When enemies reach appear in your field of combat, the game immediately switches to combat mode, and those familiar with the genre will be greeted with familiar gameplay loop, featuring action points, RNG, abilities, and turns. The slow-paced exploratory phases that for some reason prefers to use a similar movement style of the combat phase feel very cumbersome and tiring.

Your adventure involves guiding your party across 20 decks of the ship with increasing difficulty and facing monsters, collecting food and resources essential to support and repair or improve your equipment. Before being able to enlist passengers still alive in your party it is necessary to convince them by filling a special confidence indicator. Weapons and armor are subject to wear and tear and must be repaired and upgraded on the workbench. Food found on your adventures must be rationed at the end of the level among all the members of the group, failing to do which will result in poor performance on the battlefield. Unfortunately, these distractions meant that I found myself spending more time rummaging through the containers, navigating the various menus, and speaking with the NPCs. This would not have been an issue if it wasn’t for the poorly designed UI, slow animations, and often generic dialogue. The combat took a backseat and often felt very underwhelming for me after being burned out by the other poorly designed elements of the game.

The story which features some very tense twists and turns also feels a bit friendlier in a sort of way than what I had come to expect from games that are adaptions of the Cthulu mythos. It also does a great job of making the narrative well defined by simplifying the deep and complex web of events that makes the Lovecraftian genre so daunting for newcomers. This is perhaps Dread Nautical’s biggest strength and one that I wish the developers had capitalized more on instead of trying to experiment too much with the narrative.

Visually the game is better off than the other sections of the game. Thankfully, the developers went with a coherent art style and didn’t decide to overreach their capabilities. The visuals feature highly stylized colors and a cartoonish approach to its character models. There’s not a lot of variety to the environments, which is expected from a cruise ship but the art direction does an excellent job of creating a creepy and unsettling atmosphere. Each of the characters is also well designed, again in a very cartoonish way, but feel at home with the setting created by the art direction.