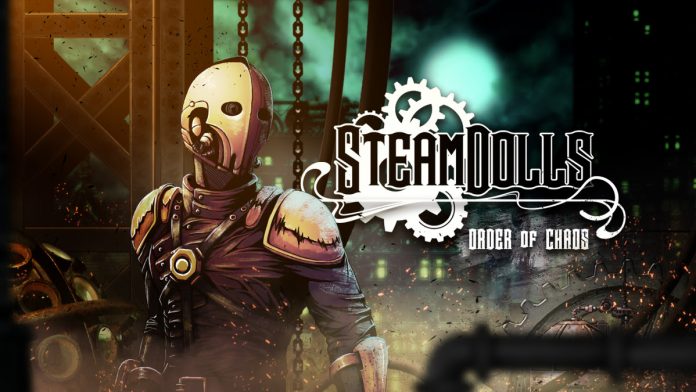 In the mist of time, society is eaten by industry, and its citizens oppressed by an authoritarian and omniscient cult.

The Whisper (David Hayter), a violent anarchist, dreams about a revolution that will destroy the order of things. He devotes himself to expose the dark side of those in power and bring awareness to the people.

His obsessive quest for the ultimate truth will throw him into a world of betrayal and sorcery where the only certainty is the imminent end of the world.

SteamDolls is a steampunk inspired metroidvania game with a grimy touch of brutality.

Blast your way to your objective or stick to the shadows and perform violent assassinations on unsuspecting guards as you struggle with the haunting apparitions of a mesmerizing witch trying to reveal the truth about a conspiracy that could shake the very foundation of the world.

Inspired by games like Castlevania and Hollow knight. Nourished by the fury of Dead Cells and the gloom of Bloodborne. Lose yourself in a labyrinthine city, full of secrets and madness.

“When fossil fuels were depleted, it was time for a change. But it never came. The discovery of a new superconductive material made sure the cycle never broke.”

This is the way their world ends, not with a bang but a whisper.

Society crumbled over time, falling into a state of disarray. Innovation became stagnation. Progression to regression. Not future, nor past. An industrial era haunted by the ghost of what came before. Mankind, their mentality ever worsening as idle habits fed into the City. Unified and tortuous it swallowed what remained of their humanity. Stealing away their free will, their determination. Crushing their souls until nothing remained. Madness.

Desperate for an alternative way to regain the glory of Old, Scientists searched for a remedy.

Until they found something. Something that should have been left alone.

Discover the truth of these broken lives in the lore of Steamdolls : Order of Chaos.

In Steamdolls, you assume the role of a cunning thief and anarchist known as “The Whisper” and make your way through heavily secured environments. (Voiced by Mr. David Hayter).

Here is the flamboyant cast you will encounter during the game.

The Enemies You Will Encounter

From the standard hired henchman who will be easily dispatched to the dangerous and disgusting mutated monster by a bio-mechanical virus, you have all kinds of adversaries and deformed Bosses in Steamdolls.

About The Shady Gentlemen

The Shady Gentlemen began to work online together by creating the graphic novel “Steamdolls”. The overall working dynamic was cool enough and they decided to flesh the Steamdolls universe with multiple projects because they love transmedia … who doesn’t love transmedia ?!

A Kickstarter is coming soon, and you can visit their gorgeous website to learn more.