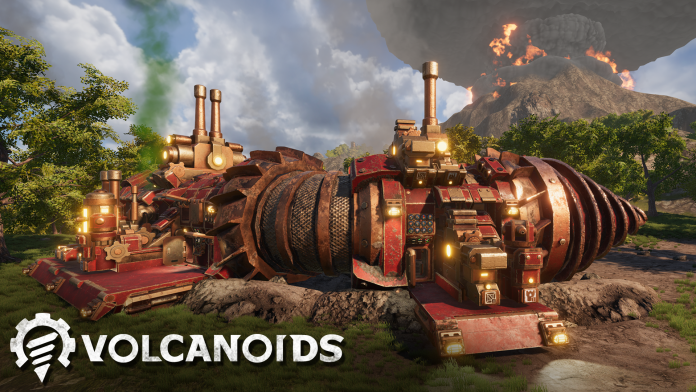 Developer, Volcanoid, has announced Co-op Mode will be coming to their steampunk survival shooter, Volcanoids on May 20 as a free update to all players! Allowing players to crew together in teams of 2 to 4, this is a much-anticipated addition to the game which has seen fantastic community support during its Early Access phase.

Volcanoids sets players on an expedition to a forsaken island racked by mysterious volcanic eruptions triggered by mechanical beings. To survive, players must commandeer and upgrade a drillship to dive below eruptions that make the surface uninhabitable for periods of time.

The new co-op update will allow players to crew up with their friends to scavenge, build, and upgrade their movable drillship base together. This much-requested feature comes along with new buildable drillship upgrades, game improvements, and bug fixes.

Many new features and devices are being added to support the drillship “crew life”. Co-op in Volcanoids will be about operating the drillship and managing tasks together as a team. One player will be able to drive the ship, while the others set up production stations, spy through the periscope, and create new items before the ship hits the surface.

Friends caught off guard by the eruption or a group of COGs will lose their loot, but can quickly re-join the crew by respawning directly in the drillship.

To support the idea of group progress, players can log off in new bunk beds that work as a safe point. Now, even though you’re offline and all your friends are still playing, you can still travel with them since the bed is placed in a mobile base. Once you log in again, you will be back with your crew right away, even if they progressed to a completely different part of the map.

Simplified start of the game

Based on feedback from the community and content creators, the crafting system has been reworked. The start of the game is now focused on being more gradual in terms of introducing new devices and systems. Previously, all the different modules, levers and buttons available right from the start were often overwhelming for many players.

From now on, players will start with basic crafting stations similar to other survival games and will gradually be introduced to more advanced modules as they progress.

The Volcanoid artists have started work on assets that will be added in future updates after the Co-op is released.

Volcanoids veterans will remember the raw models of new COG units. These models are getting a complete rework.

Lastly, more locations to explore are also in the pipeline such as these (drill)shipwrecks.

Volcanoids is currently available for Windows and Linux in Steam Early Access.