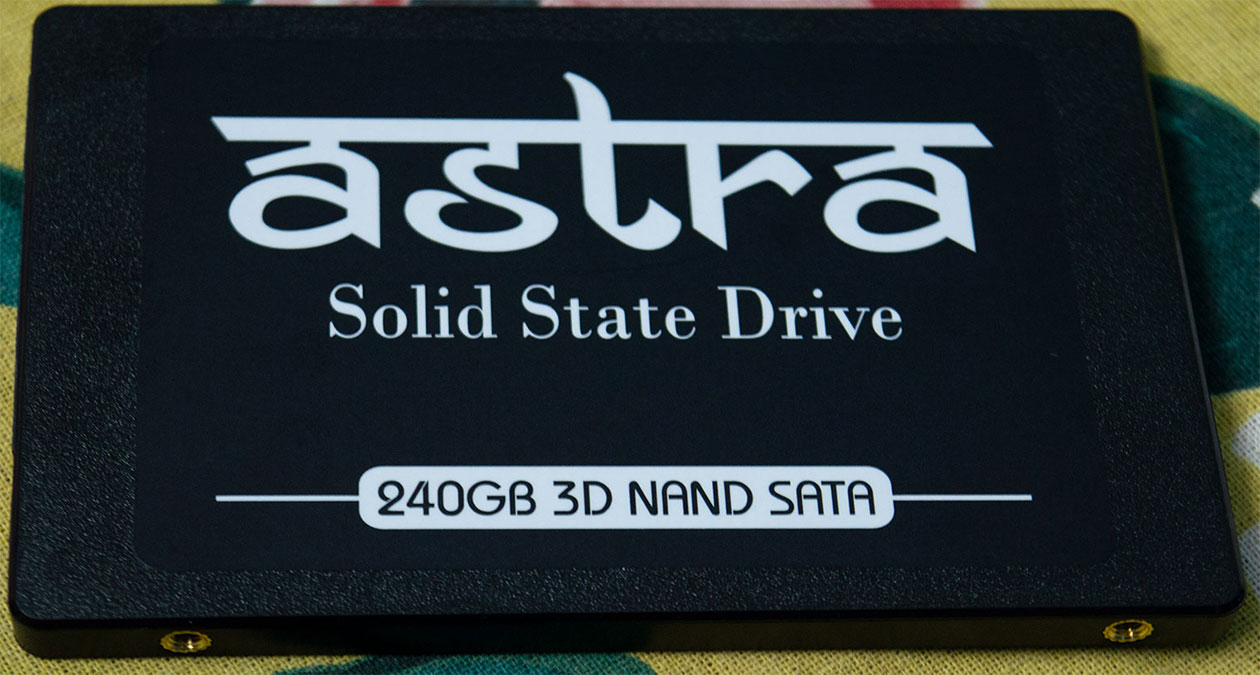 A few months back, a small Indian Startup called AstraTech made its entry into the Indian Hardware Manufacturing Scene. The first product was an NVMe SSD called KD350X aka “Kapi Dhwaja” aimed at the mid-range NVMe segment.

The SATA 2.5″ version was released without much fanfare presumably because its a more “budget” version. We were provided with a review sample of the 240GB Version. So let’s check out the Astra KD55SX SATA SSD.

A small profile of the company can be found here. In simple terms, they are a group of like minded technology enthusiasts and Industry Personalities who wants to take Indian brands further. This SSD is a part of their opening salvo in the market.

The SSD comes in a simple blister-like packing (without the headache that comes with it). Its not much to write home about, we have the Astra branding on one side and a glimpse of specifications on the backside. The SSD is backed with a 5-year warranty which inspires confidence and puts into the same league as Kingston.

SO from the specification we can see Astra is positing the KD55SX in the entry level SSD spectrum. As such it will compete against the likes of Kingston A400, Galax Gamer L, WD Green, Hikvision C100 etc.

We have a combination of Micron 3D TLC NAND with Phisons PS3111-S11T entry-level controller like the others in this space. Astra has gone with a tried and tested formula for the KD55SX and for the most part I cannot fault them for it. The entry-level doesn’t really have much wiggle room to play.

Our testing system consisted of the following parts.

We ran the Astra K55SX through our usual gauntlet of benchmarks. The results are inline with other SSD’s in the same spectrum as expected.

With Write speeds touching the 520 MB/s, we are off to a good start!

From this review onwards, we are going to introduce Crystal Disk Mark V7 along with V5.0. The plan is to gradually phase out V5.0 scores in favor of the newer version.

AJA System Test
AJA system test is used to benchmark the performance of a drive for video production workflow across various codecs with different settings. For the purpose of our review, we chose the 4K resolution with Apple ProRes 4444 Codec with variable bit rates.

The Astra KD55SX is positioned as an entry-level DRAM-less SSD for entry-level builds. Apart from that, we have seen it works out pretty nice for a secondary drive for a cheap workstation or any other data-centric workloads. It will be unwise, however, to expect blazing fast speeds from this simple for the reasons that it’s not built for that. This drive is meant to be used as a fire and forget solution for entry and mid-level gaming rigs and should be left at that. For anything else, it can step up to the game as evidenced in the results but faulting it for relatively slow speed will be extremely unfair.
I am really impressed by the drive itself, more so impressed since its an Indian brand and that makes me proud. BUT the Astra marketing needs to step up its game if they want to make a mark. The SSD has NO MENTION or presence outside of Etailer or Retailers Listing and that’s at least a yellow (or orange?) flag for potential buyers.

My suggestion would be to go buy it, its a very capable SSD, you will not be dissapointed.

A Bronze from us in TechARX.