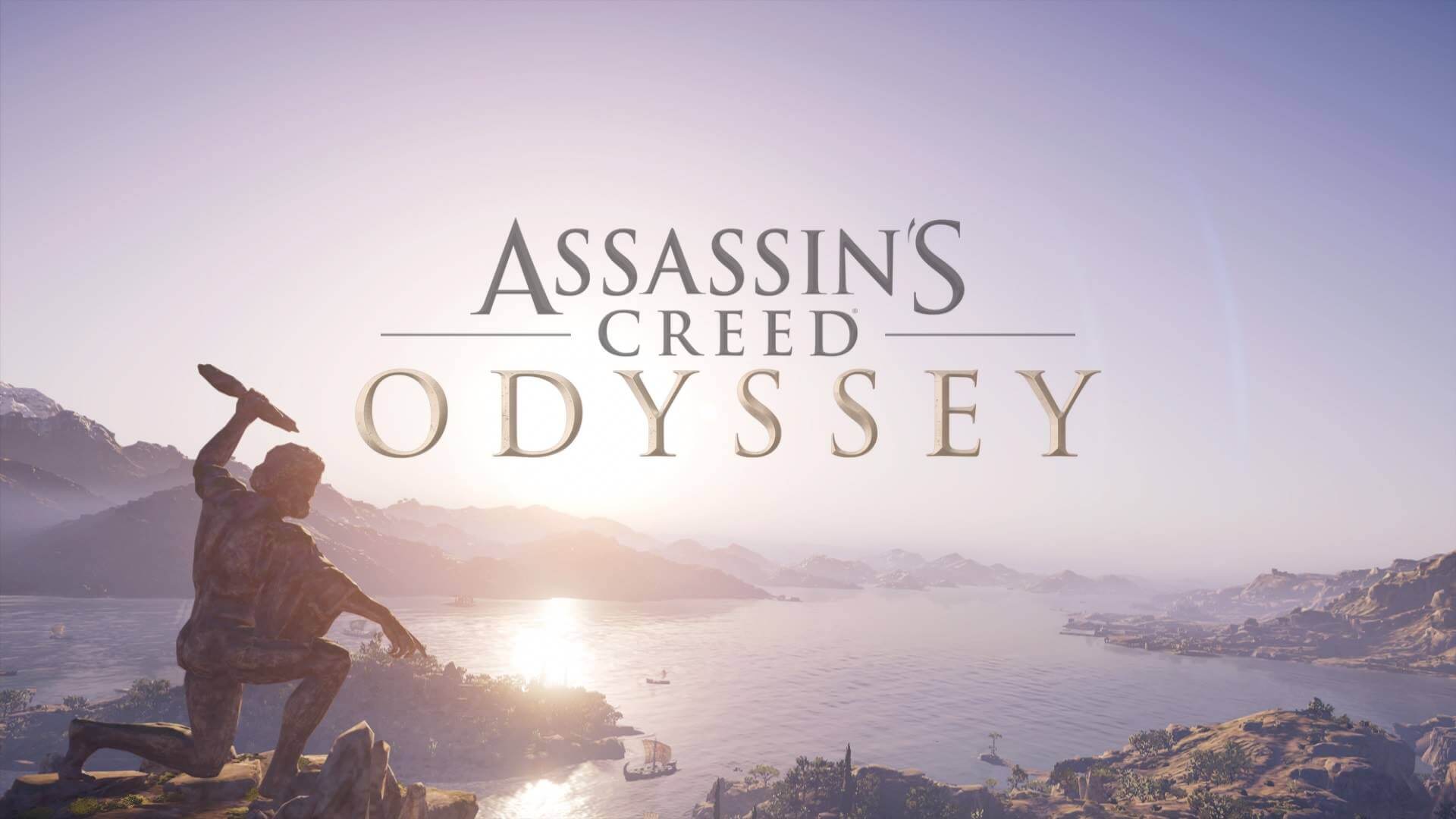 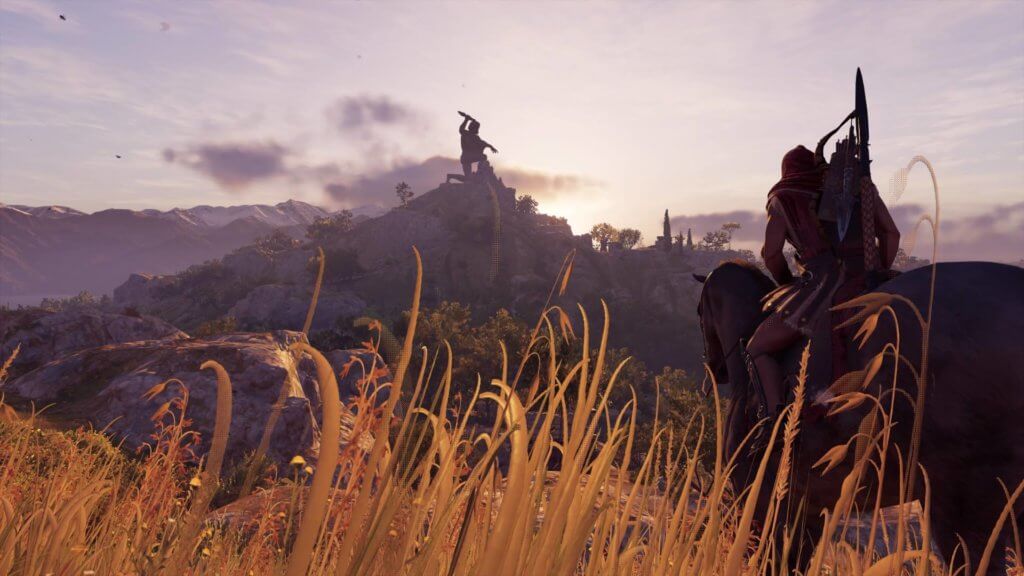 You start off Odyssey with a choice, choosing to play as the male Alexios or the female Kassandra. Female protagonists are nothing new in the series, from Aveline to Evie Frye, and multiple protagonists have also been done before. But the sheer amount of flexibility in developing your protagonist how you see fit has never been done before and while some of your choices have very little to no impact, some choices can have long-term consequences and leave you morally questioning yourself.

Like Origins, Odyssey has RPG mechanics deeply embedded into its gameplay. It’s got enough loot drops to make Diablo shy, an extensive XP and leveling system that allows you to invest in three disciplines, unlocking special abilities for use in combat and a fairly straightforward upgrade system with resource management. 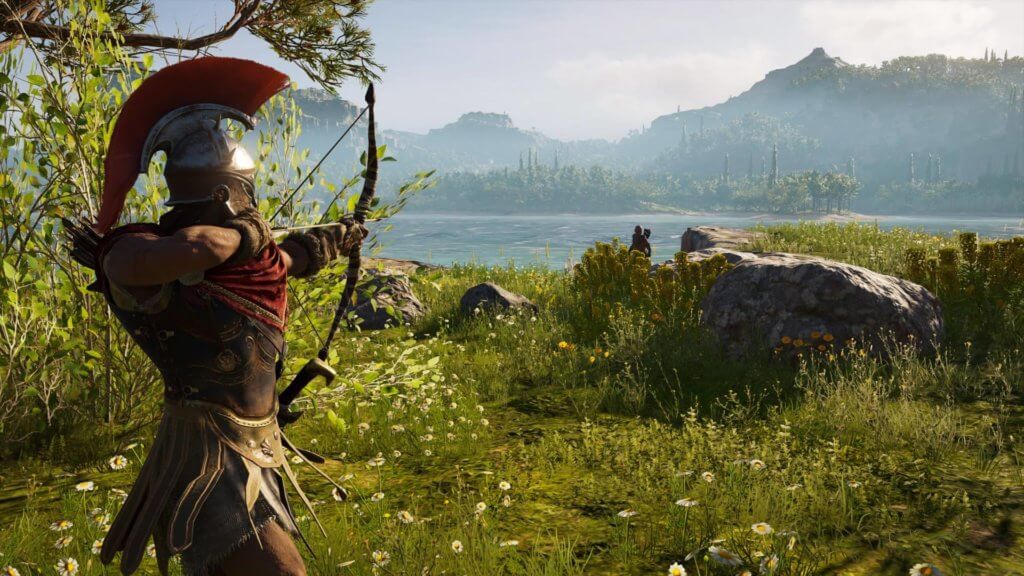 The new combat system introduced in Origins has been refined and streamlined. Multiple types of bows have been removed in favor of the new ability system, shields along with the series’s staple hidden blade have been removed, and replaced with the spear of Leonidas(yes THE Leonidas). This results in a more fluid and responsive combat system that sheds any more unnecessary complex subsystems while simultaneously being more flexible thanks to the Odyssey’s diverse skill system.

The flexibility in combat is also due to the staggering amount of choice in terms of equipment and skills. You can use special abilities like the famous Spartan kick that can give you precious breathing space when getting ganked by the enemy and then reduce the space between you and your prey with the bull rush skill. You can rain down arrows to take out a bunch of soldiers while hiding in a bush or use the predator skill to hunt them down from a distance, or straight up disappear after killing everyone and if stealth isn’t your cup of tea, you can just light your spear on fire and rush towards your enemy like a true Spartan. The three distinct skill branches allow you to turn Kassandra or Alexios into the misthios war machine as you see fit.

Your skills can be augmented with engravings which are added to your equipment. These augments unlock with each milestone that you cross, like X number of sword kills or Y number of mercenaries killed. 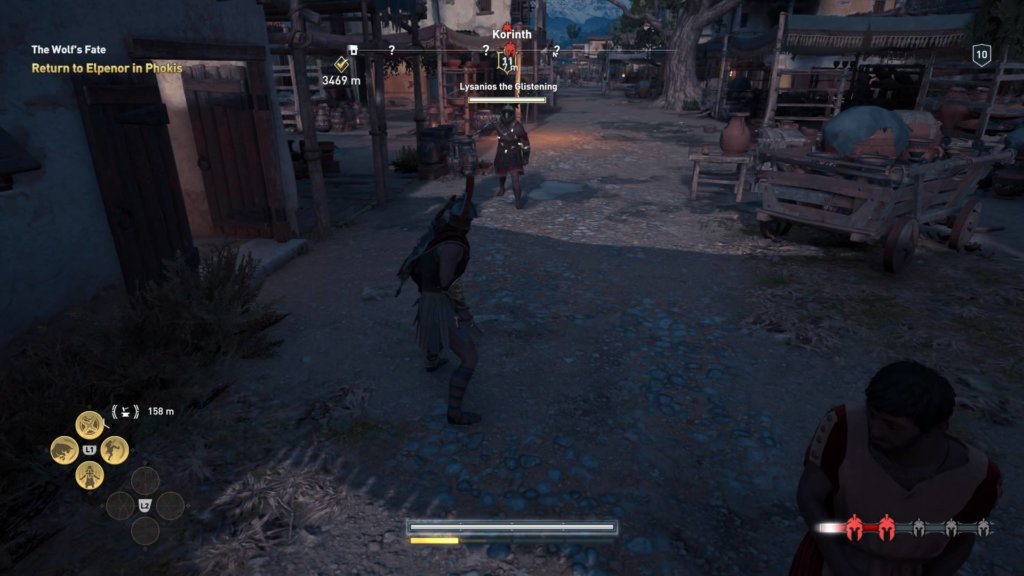 Odyssey vastly expands and adds new mechanics over its predecessors. The Phylakes that used to hound you in Origins have been overhauled to have an entire new subsystem of other Misthios that will hunt you down for bounties or can be hunted down for loot and Drachmae. These mercenaries have their own randomly generated personalities and backstories like I had “Phoebe the Patricide” chasing after me for the better part of my 15-20 level journey before I finally defeated her in a duel. The more people you kill, the more war resources you destroy, the more mercenaries that will come after you. And when you are taking on an entire fort garrison, the last thing you need is “Regis the lion tamer” coming after you with his pet lion throwing flame bombs. 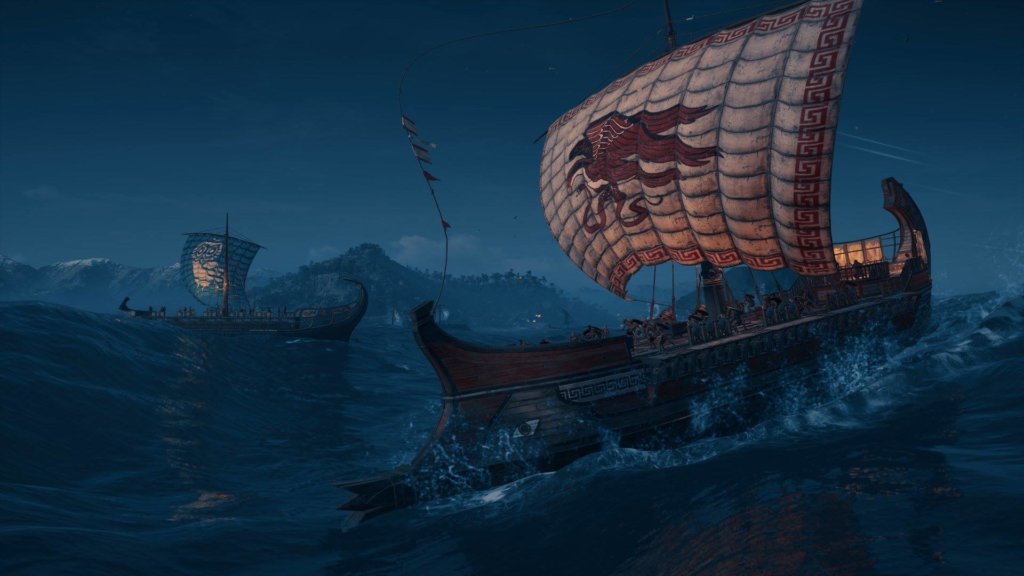 Something else that returns from the previous generation games is Naval battles and they are better than ever. You control the Adrestia across the Aegean sea, filled with Athens and Spartan war fleets, harmless but drachma filled merchants, pirates and bounty hunters. The Adrestia can be upgraded to become a force to be reckoned with, allowing you to take on more powerful foes, burning and tearing them apart by ramming them before boarding them to repair any damage done to your ship and getting that sweet loot. 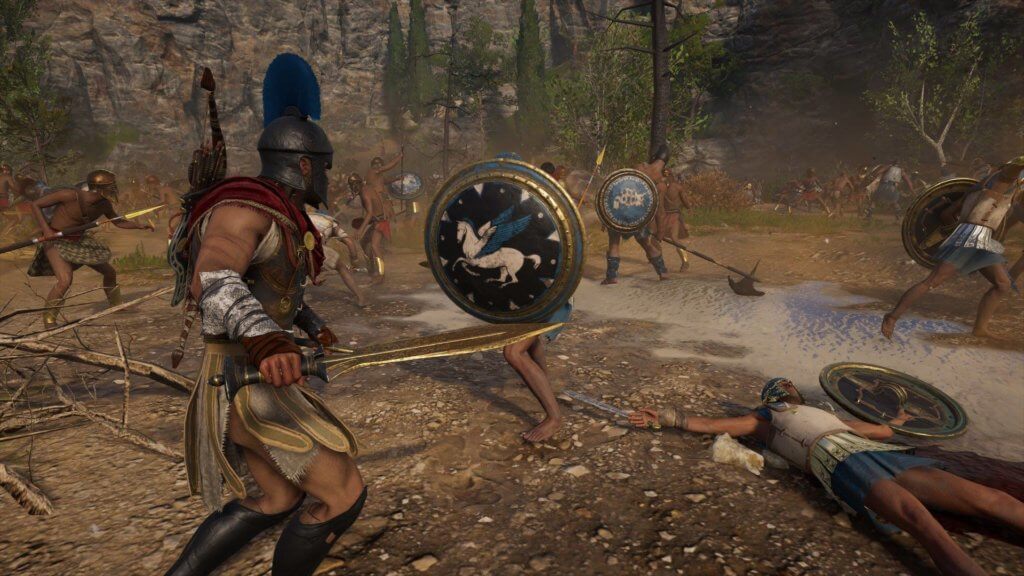 By destroying resources and killing notable leaders, you can weaken the controlling nation’s hold on a region and trigger conquest battles. These huge battles are truly a spectacle to behold, allowing you to fight against or with the offensive army, effectively altering the course of the war. Winning these battles net you with a lot of XP and loot but at the end of the day they were nothing more than an effective XP farming mechanic for me, I would have appreciated a small arc on these battles.

Odyssey’s Greece is a colorful and diverse world. Ubisoft has always nailed when it comes to creating gorgeous game worlds but they have truly outdone themselves this time. Odyssey is HUGE, with multiple islands and landmasses that are bigger and filled with more activities to do than entire games. I have spent close to 70 hours with Odyssey and I have just managed to finish the multiple story arcs. There’s still a ton of side quests that I haven’t touched and I expect to spend at least 50 more hours before I can say I’m truly done with Odyssey. 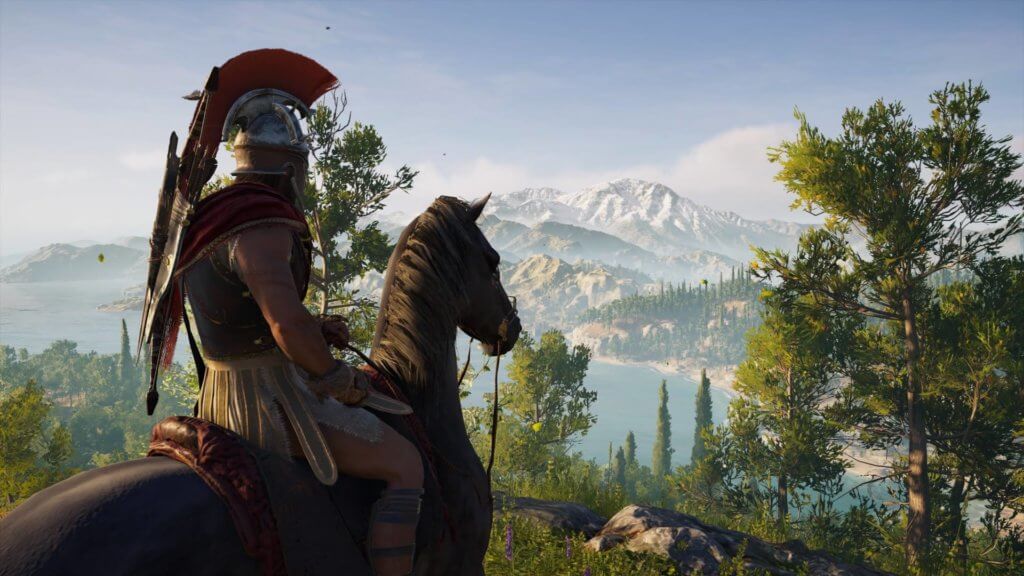 Even after spending hours galloping across lush green valleys, climbing rocky mountains and exploring the maze-like cities of Odyssey, I am still awed by the visuals of this game.

The scale of the world is also something worth commenting about, I decided to check out the other side of a snowy mountain. After some minor pit stops in enemy camps, I managed to get to a city hidden between two mountains after an entire days journey. 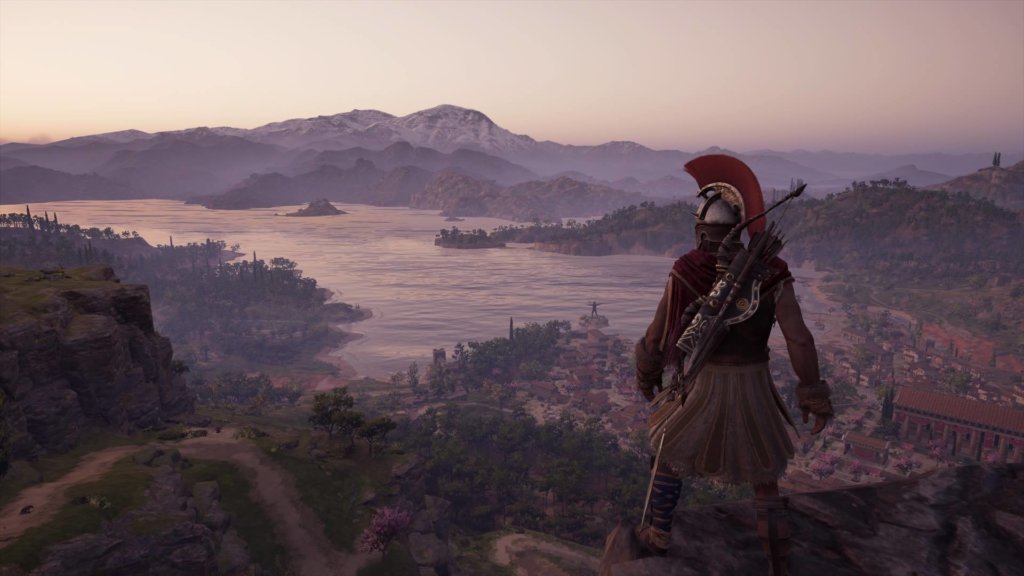 Odyssey does an excellent job of recreating ancient Greece and with its rich vibrant visuals, Ubisoft has managed to create one of the prettiest game worlds I have ever seen.

Despite some unnecessary padding to it’s story and some meaningless fetch quests, Odyssey manages to hit almost all the right notes with it’s huge content, beautiful visuals and smooth gameplay.

The addition of choices, allowing you to create your own story and the more refined gameplay creates an enjoyable journey that makes Assassin’s Creed Odyssey the best Assassin’s Creed to date.