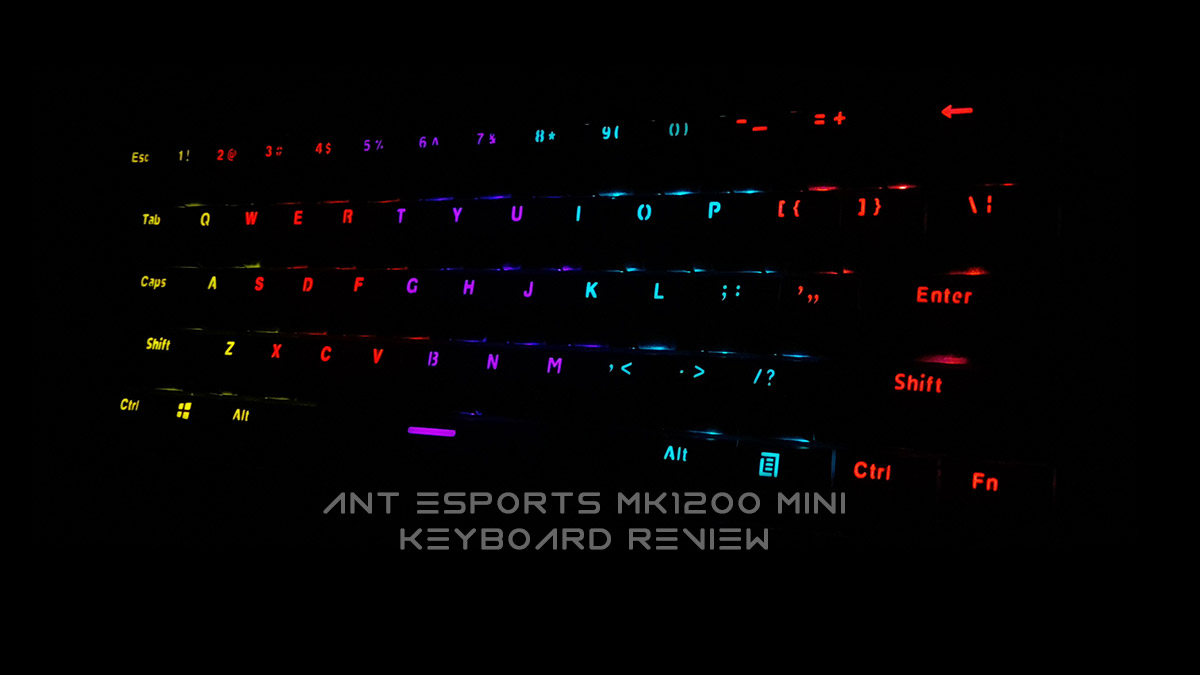 Originally the”60″ or “65” percent keyboards were the exclusive territories for hardcore keyboard enthusiasts. However, recent push from the streamers and e-sport crowd have made these petite keyboards a bit more mainstream so to speak. Today, we will be checking out such a keyboard from Ant Esports. But first, let’s get a little 411 on 60% keyboards.

Small Size with some sacrifices.

Usually, a standard keyboard has 104 keys. The 60% keyboards usually have 60-65 keys. The one we are checking out today, for example, has 61 keys. Contrary to the Ten key Less(TKL) layout, 60% drops the navigation and utility keys along with the function keys. The whole layout is compressed into one single block without any gaps. 65% on the other hand gives a bit more wiggle room by keeping the arrow keys but dropping all other nonessential keys.

The ANT Esports takes the budget/affordable keyboard formula and applies it to the 60% format. Let us check out how they do it. Starting from the packaging itself.

The packaging in itself is not much to write home about. It is as basic as it can be and perfectly fine considering the fact that it’s a budget keyboard. The box has the keyboard, one USB C cable, a manual, and a warranty card. The USB C cable is braided, which is a huge plus, adds a premium feel to the package.

Coming to the keyboard itself, Ant Esports has gone for the default basic 60% layout without any fanfare. We have 61 keys sitting on a closed box design weighing just under 400gms.

One thing I liked very much is the fact they have provided double prints for the text and symbols to highlight each key’s secondary features. It takes out the guesswork and mental gymnastics to remember the functions. But what I don’t like is they didn’t go the etching way for the secondary information. With the Indian scenario in mind, the prints will wear out and they will go fast.

The keyboard itself is a closed design, meaning the switches sit inside the case rather than in an open plate design like HyperX designs. This is done to minimize the amount of dust getting in.

The MK1200 uses a switch called YH. It is a variant of the OUTEMU Box Mechanical design. Our searches brought up no specs list as such but they feel like the normal OUTEMU Blue so a calculated guess can be made. We have added a side-by-side below for our readers. The LEDs sit under the key in this keyboard and Ant Esports has gone for an assortment of colored LEDs to give the MK1200 its 17 different color modes. The switches look like they can be swapped easily without much destruction which can be a tempting proposition for any modder.

ANT E-Sports brings a very decent and competent keyboard to the table with the MK1200. During my time with the keyboard, I had an absolute blast with it while typing. The 60% layout takes a bit of time to get used to, but once you get the muscle memory trained, it is very hard to return to a full-size KB. The keys feel decent, not too mushy, and with just the amount of click to make it work. Gaming with this is going to be a bit hard for someone who likes to drive and uses a lot of macros, this board is solely for the FPS guy in you, the RPG guy, or the driver is going to be disappointed.

In my opinion, this is a writer’s keyboard, full stop. BUT where is my keyboard stand ANT? Probably this was done to decrease the weight but I would expect a fix in the next revision of MK1200.

However, there are two things that I absolutely did not like about the Keyboard

Overall, it’s A silver from TechARX. A little powerhouse for a relatively new entrant in the market but there is room for improvement.