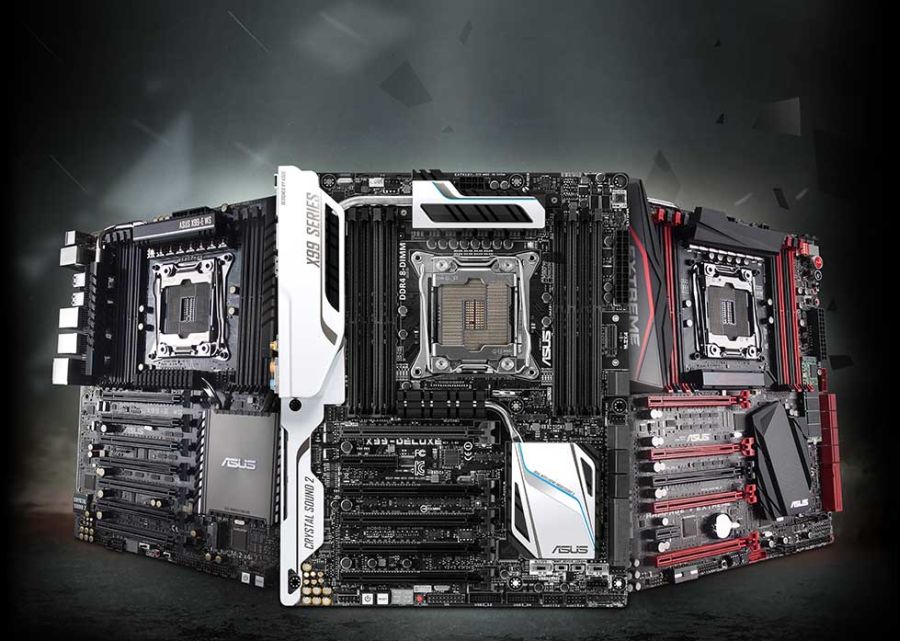 Last Friday we saw Intel release their much awaited update to the HEDT platform with the release of Haswell-E processors. As with this roster, the number of processors has been limited to only three: the low-end/budget part (?) i7-5820K, the mid-range 5930K and the flagship 5960X. This update also brought IPC increase, a new X99 chipset, the first consumer platform for DDR4 memory (288 pin slots), and last but not the least, the new LGA2011-3 socket which is not backwards compatible.

As expected, leading motherboard manufacturers have been teasing their upcoming X99 based models for quite a while and now that the cat is finally out of the bag, we are getting a more complete picture about their lineup. Let’s have a look at what’s in store for us.

unlike other competitors in this space, hasn’t been playing the hide-n-seek game with their motherboard models. Their press releases pre-NDA has been quite reserved, but with the launch out of the way, they were quick to announce five motherboards. Three amongst those five belongs to Asus’ consumer range, the X99-A, X99-Pro and X99-Deluxe, while the ROG flagship, Rampage V Extreme keeps extreme enthusiasts happy. The X99-E WS is aimed more at workstations. Notably missing from the list are the ROG Formula and Gene boards, but we hope they will be released too in the coming months.

In continuation of the trend we saw in Z97 motherboards, the color themes Asus has chosen are pleasantly surprising. The consumer boards have now a black and white theme, with the heatsinks white with silver outlines. With the matte black PCB this certainly looks the part. ROG line retains its familiar black and red livery but is subdued in this iteration. The workstation board, however, goes in a different level of subtlety. With steel-gray and black, the X99-E WS certainly is one of the top contenders of the best looking X99 motherboard.

X99-Deluxe, the mainstream flagship has the specs to match with dual SATA Express, dual Intel NICs, a vertical M.2 x4 arrangement and the Crystal Sound 2 shield around the audio and rear panel. We also get a tri-stream (3T3R) 802.11ac setup included, a first in any mainstream motherboard.

Asus has included a couple of interesting features in the X99-Deluxe. First off is their implementation of a vertical M.2 arrangement. The slot has been put near the ATX power connector, and Asus provides an adapter to mount even a full sized M.2 card. This is a neat feature but we will keep our tabs on this one to see how it matures. Asus also provides a M.2 to PCIe converter card allowing you to add a second M.2 card should you wish to.

Then there is an extra daughter board with a series of fan headers, all powered by a 4 pin Molex connector. We’ve seen this in Maximus VII Impact, but this is a full scale implementation of that idea, and Asus says the fan headers will be DC and PWM compatible. This is something many of us have been asking motherboard manufacturers to make, and looks like Asus is first to jump on the bandwagon.

Another new feature is the multi-GPU switch on board which lights up an LED next to the ports you want to use in case of two or three GPU setups. This is sort of a novel feature to streamline the installation process and not be bogged down between pages of the manual.

X99-A is pretty much the barebones board, and while it retains Crystal Sound 2, the heatsinks are much reduced, with visibly lesser VRM phase circuitry the Deluxe. The vertical M.2 slot is gone, and we get only one Intel NIC, and no wireless implementation is on board.

With the X99-Pro we get a 2T2R WiFi module added into the fray, but feature wise it is almost identical to its lesser brother. No further details are out about these two boards, but Asus says we’ll get to know more within this month.

That brings us to the workstation board, the X99-E WS. Much like its predecessor, the P9X79-E WS, the X99-E WS is a CEB form factor motherboard with all bells and whistles. So we get compatibility for Haswell-E Xeon processors and ECC memory, a whooping 7x PCI-E 3.0/2.0 x16 slots making the board ready for both quad SLI/Crossfire configurations, 12K hour solid capacitors, dual Intel NICs, and shielded audio section in the form of Crystal Sound 2. We also get a single SATA Express port, a M.2 x4 slot, and 8x internal SATA 6GB/s ports. There are also 2 eSATA ports on the rear I/O. USB connectivity is on steroids too, with 10x USB3.0 ports on the rear panel and two USB 2.0/3.0 headers, making a total of 18 USB ports.

This is the most expensive board on Asus’ lineup at $520, around $20 pricier than the ROG flagship, the Rampage V Extreme.

A detailed writeup on Rampage V Extreme is available here