Transcend Information, Inc., Taiwan-based manufacturers of storage and multimedia devices recently announced the release of the JetDrive Go 500 Flash Drive which has been especially designed for the Apple iPhone, iPad and iPod in order to help expand the devices’ storage space. Boasting high-quality alloy construction, lighter weight and smaller size, Transcend’s JetDrive Go 500 comes equipped with a Lightning connector as well as a USB 3.1 Gen1 connector, resulting in the provision of easy data transfer between Apple computers and the aforementioned handheld devices. Fuelled by Transcend’s exclusive Jetdrive Go app, media like photos and videos can be captured and saved seamlessly on the JetDrive Go 500, eliminating the worry of running into the “insufficient storage space” error that every Apple user is familiar with.

Let’s take a look at some of the key features that Transcend’s JetDrive Go 500 offers:

Compact and Smart Design
The JetDrive Go 500 is surprisingly lightweight and compact, making it one of the smallest flash drives in the market. Available in shades of both gold and silver, the compact device has a sleek alloy casing. The JetDrive’s extended Lightning connector allows the device to have expanded compatibility with protective bumper cases which prevent other flash drives from connecting unless the casing is removed.

Unmatched Transfer Speeds
The Transcend JetDrive Go 500 perfectly amalgamates the two data transfer behemoths that are the Apple exclusive Lightning connector and a regular USB 3.1 (Gen1)connector into a single flash drive. Apple’s Lightning connector can reach transfer speeds up to 20 MB/s, whilst the USB 3.1 Gen1 connector offers transfer speeds of up to a whopping 130MB/s per second. These unparalleled speeds enable users to transfer even a 4G HD movie in just 28 seconds.

The Exclusive JetDrive Go App
The Taiwanese Company’s exclusive JetDrive Go App, downloadable from the App Store features an intuitive and easy to use interface for the users. Allowing the user to do everything from creating a backup of the camera roll on the JetDrive Go 500, to transferring files from an iOS device to a computer, the app allows the user to truly experience the flash drive to its full potential. The app also has a Shoot and Save feature, which allows the photos and videos shot from the camera to be stored directly to the device eliminating the familiar problem of insufficient storage space. In addition to all this, the app automatically organizes the files into folders, photos, videos and documents, hence simplifying file search and minimalising management issues.

Apple MFi Certification
The Mfi(Made for iPad/iPhone/iPod) certification, Apple’s licensing program for third-party hardware accessories that have been specifically designed for iOS devices, assures the user that the product is both compatible and safe to use. The JetDrive Go 500 has gone through this rigorous approval process to not only guarantee compatibility and safety, but also quality that meets Apple’s stringent performance and manufacturing standards. 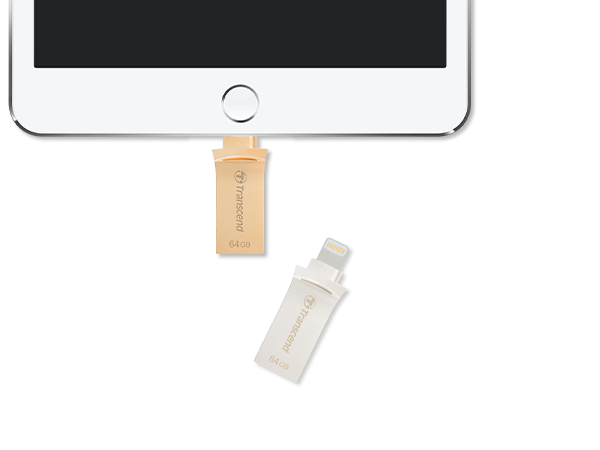 Transcend JetDrive Go 500 is available in 32GB and 64GB models with each having gold and silver colour variants and is backed by Transcend’s Two-year Limited Warranty.
Devices supported by the flash drive are: