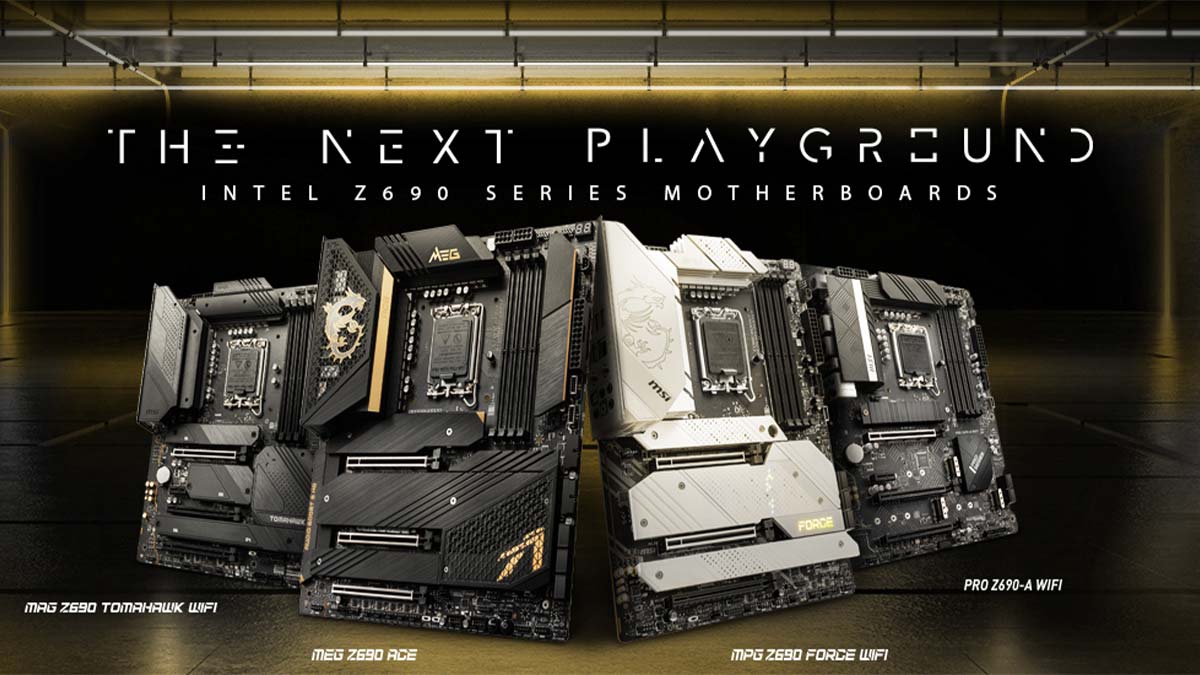 . On PST time Oct. 27th, Intel launched the 12th Gen Core processors while MSI presented the latest Z690 motherboards. As a world-leading motherboard brand, MSI wants to offer nothing but excitement. Utilizing integrated new technologies, MSI is ready to move into the new era. Let us introduce you to “The Next Playground”.

The latest 12th Gen Core processor is the first to incorporate Intel 7 process technology and Hybrid Architecture. To match the performance of the 12th Gen Core processors, all MSI Z690 Series motherboards are upgraded. The highlight of the new platform is the latest PCIe 5.0 and DDR5. All MSI Z690 motherboards support PCIe 5.0 solution which provides 128GB/s of transfer bandwidth. MSI has Z690 DDR5 and DDR4 motherboards to meet different needs. Excitingly, MSI OC LAB tuning boosts the memory frequency performance by over 30% based on MSI’s exclusive Memory Boost technology. With the optimized layout, MSI uses the SMT process for both PCIe 5.0 and DDR5 to maintain the stability of high-speed transfer.

The newest core processors need mighty power phases. The MSI Z690 Gaming Series motherboards have at least 16 DrMOS with Duet Rail Power System and dual 8-pin CPU connectors, which guarantee stable and strong current delivered to the core processor. Moreover, the MSI Z690 Series motherboards have Server Grade PCB with 2oz thickened copper, which allows for higher transfer speed. (*1) The upgraded power phases typically have higher temperatures. However, heat dissipation isn’t an issue for us. Our Z690 motherboards feature an Extended Heatsink, 7W/mK thermal pad, and M.2 Shield Frozr. The MEG and MPG Series motherboards, which are popular among gamers all over the world, have Heat-pipe Design and double-side M.2 thermal that can drive maximum performance.

As for connectivity, 2.5 LAN is a piece of standard equipment for our Z690 motherboards. Additionally, the DDR5 motherboards support the latest network solution Wi-Fi 6E. To provide a better connectivity experience, the MSI Z690 motherboards adopted front Type-C to support external devices. For storage, all lineup has at least 4 onboard M.2 slots including 3 M.2 Gen4 x4 slots, which provide high speed to our users. (*2)

We are not only working on hardware, but also on software. All MSI Z690 motherboards support TPM 2.0 for the latest Windows 11 operating system. MSI Center has new functions as well. System Diagnosis restores and backups your MSI storage devices in one click to provide stable system usage, and users can even monitor the storage status to prevent system crashes or missing data. For RGB lovers, we added MIXER that can create unique lighting effects by combining three different selected effects.

Our MEG Series has more fascinating features. The MEG Series has direct 19 VRM phases with 105A SPS. They are covered in All Aluminum Design so that heat can dissipate effectively to maintain remarkable performance. What’s more, the larger backplate helps dissipate heat, supports memory slots, and protects the PCB. The MEG Series motherboards are equipped with up to 5 onboard M.2 slots including a maximum of 4 M.2 Gen4 x4 and 2 PCIe 5.0 x16 slots, which offer hardcore users the best experience.

If you are looking for dual PCIe 5.0 x16 slots, dual 2.5G LAN, and dual front Type-C 20G, the MEG Z690 ACE is undoubtedly your ideal choice. You can choose from the all golden ACE. The MEG Z690 ACE has its mystery-black surface decorated with 24K Gold rather than having RGB lights. It will shine as bright as your victory in games.

The MAG’s distinctive arsenal pattern is sure to impress. The brand new design was inspired by military structures. The MAG Z690 TORPEDO keeps the pacific blue color scheme, which is well-received by our fans. The MAG Series is made for success.

In addition to the designs, the MAG Series has outstanding specifications. The MAG Z690 TOMAHAWK WIFI and the MAG Z690 TORPEDO are upgraded to have 16 Duet Rail Power System with 70A SPS. With 1 PCIe 5.0 x16 slot and 3 M.2 Gen4 x4 slots, you can enjoy games thoroughly.

The PRO Series might be popular for enterprises and creators. With 14 Duet Rail Power System and dual 8-pin CPU connectors, the PRO Z690-A and the PRO Z690-A WIFI will assist with completing your tasks. The PRO Series is also equipped with 1 PCIe 5.0 x16 slot and 4 onboard M.2 slots, which can improve your work efficiency. The linear design matches your office or studio in every possible way for a more unified look.