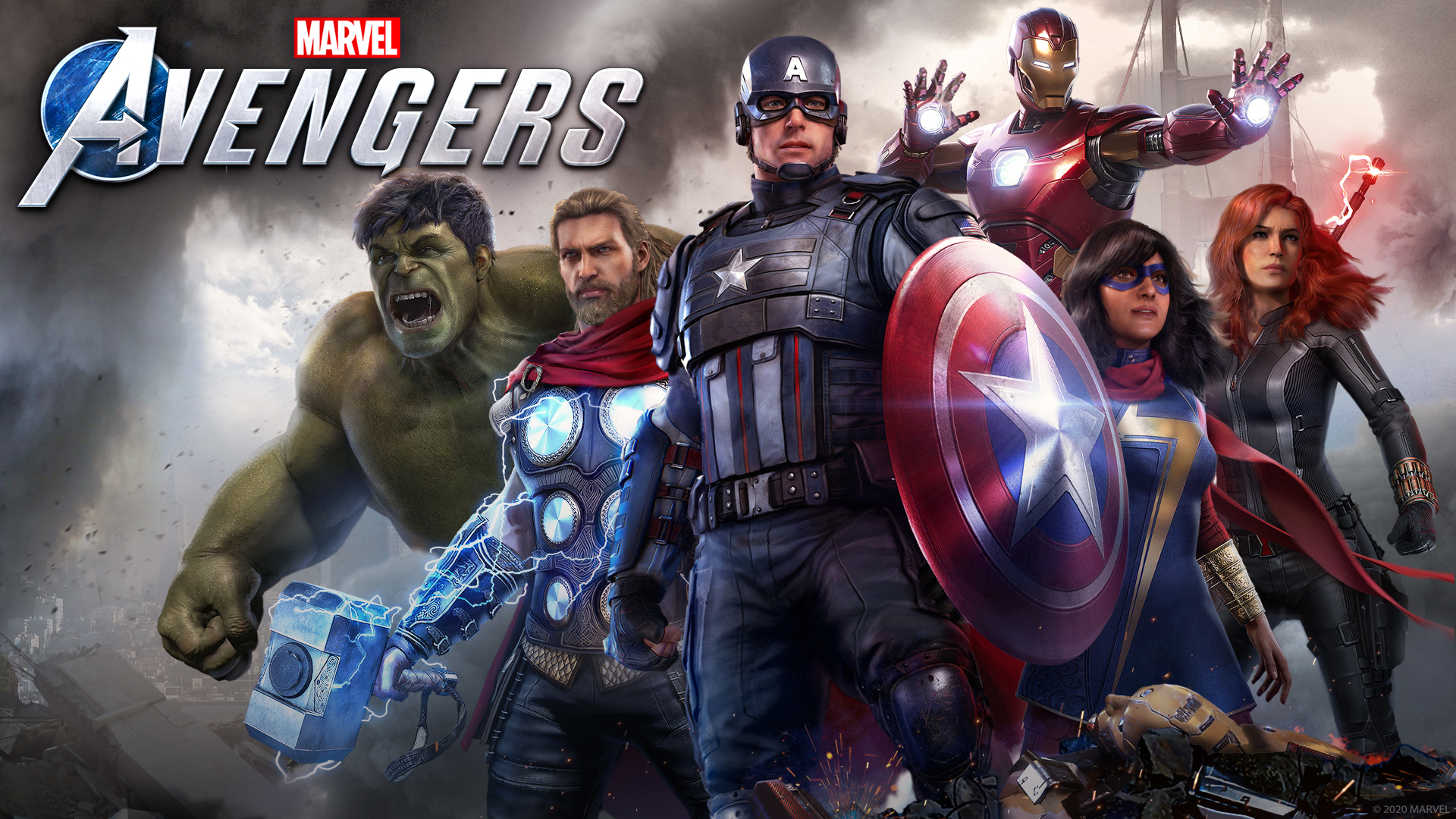 Marvel’s Avengers, a game as spectacular and full of iconic moments as any of the comics or movies in the saga. Everything, absolutely everything you would expect from a good superhero story is in the game, backed up by an excellent cast. But the included multiplayer component feels extremely lackluster and pointless compared to it’s singleplayer component.

While Marvel’s Avenger offers bits and sections from the perspective of its various superhero cast, the spotlight falls on Kamala Khan AKA Ms. Marvel. The game starts on A-Day, when the five current members of the earth’s mightiest heroes — Captain America, Iron Man, Thor, Black Widow, and Hulk fail to stop an accident involving the Terrigen crystal turning the citizens of San Fransisco into Inhumans and Captain America gets supposedly killed. Most of the Avengers hang up their mantle, and S.H.I.E.L.D agents go into hiding. Meanwhile, A.I.M. – Advanced Idea Mechanics decides to step in and save the city by curing the citizens, lead by George Tarleton.

Our young protagonist, Kamala is also exposed to the Terrigen Mist, turning her into a polymorph. 5 years later, the Avengers are gone, and Inhumans are hunted down to be “cured”. Kamala decides to hack into AIM’s servers, one thing leads to another, and she finds herself going across the country to reunite the Avengers.

I know I said that I didn’t expect the story to be the highlight of the game when I reviewed the beta, but boy was I wrong. The story is great, it is a completely new story, developed in collaboration with Marvel itself, and serves as both an origins plot and an epic adventure. The voice actors do a tremendously good job at creating chemistry amongst the team, and the script is humorous and surprisingly emotional at times. It blends in themes like redemption and believing in yourself while still delivering over the top action sequences.

Because the majority of the game takes place from the perspective of Kamala, especially the opening sequences, and since she is a fan of the Avengers herself, you can genuinely feel her excitement as gets to be a part of her dream. As a fan myself, it felt heartwarming to see her dorky excitement.

Marvel’s Avengers is structured kinda like an MMO. During the campaign, you launch missions from two hubs, the SHIELD Helicarrier and The Anthill, where Hank Pym and the Inhumans take refuge. From any of these points, you can access the war table, and dive into missions.

Each character has a couple of iconic missions that expand their story and rewards you with extra gear and resources as well as iconic outfits. There are also assault missions against AIM facilities, the HARM room where you can practice playing as the heroes, as well as villain sectors and open-world zones where you go around beating bad guys and meeting certain objectives. There’s also a raid coming soon, so the amount and variety of content on offer here is great.

As you do missions and accomplish objective, your character will level up. You can unlock new abilities as well as upgrade your existing ones using the XP you earn. There are three different upgrade trees, offering you passive level-ups, be combat moves and upgrading your heroic abilities.

Since the game tries to be an MMO, it also features item drops and pieces of equipment. And this is where Marvel’s Avengers drops the ball, it’s a severely underdeveloped mechanic that does not have any depth to it all. It boils down to whatever power level is higher, and the passive or set bonuses rarely make a difference. I was worried about this when I played the beta, and unfortunately, it’s still an issue in the final game.

On the plus side, I know a lot of people were worried about the microtransactions and the games as a service model, but so far I have had 0 inclination to purchase any of the skins. In fact, the free skins I got seemed great, and you can easily grind out the rest of the skins. I know grinding isn’t everyone’s cup of tea, but it comes with the territory.

You can go into the missions solo, co-op or with 2 other AI companions. This is a great feature for solo players, and the AI does a great job of backing you up. Unfortunately, they do not level up with you in these missions, so you will have to individually level them up if you want to keep them viable for other missions.

The main attraction of the gameplay is the combat system, and it feels great although a bit simple at times. You have a light and, strong attack, three special heroic abilities that take time to charge. In addition, all the characters have a ranged attack, which is unique to each of the character’s combat style, for example, Thor Uses his hammer while the hulk just grabs whatever is lying on the ground and throws it at his enemies.

Each of the characters feels distinct when it comes to their combat style, even though they might share a similar archetype. Black Widow and Captain America play out as Brawlers, dishing out combos with their fists and weapons, but while Natasha feels more fluid and acrobatic, Steve feels like a superpowered pub brawler.

Some of the characters can even fly, such as the Iron Man. Flying doesn’t feel as fast as it should, in my opinion, but I think this is to make sure the characters feel balanced as well as technical limitations.

I am really happy with how they managed to make each hero feel distinct, it sometimes feels like a different game when you are controlling each of these heroes. Playing as Thor lets you throw the Mjolnir and then recall it back from anywhere. Iron Man gets to fly and shoot beams, while the Hulk just plays like Hulk, you smash things around.

The campaign level cap is at 50, but it is possible to keep increasing the potency and getting new cosmetics. The difficulty of the missions scales with you. With so much, even though there are only 6 characters, the game can take well over 30 hours to complete if you take your time or as short as 10-15 hours. There are more heroes and villains coming post-launch, so it should add more to the hours later on.

But despite it somewhat acceptable length, the issue with the gameplay is, it tends to get downright repetitive and boring once the campaign ends. The objectives stay the same most of the time, go here, beat these people up, and hack that. Without the story to carry it around, and a broken end game featuring pointless loot mechanics, the game quickly breaks down to a slog. It remains to be seen whether the developers can fix this up with their promised plethora of content updates.

Visually the game is also a mixed bag, the character models are all excellently done. If you can ignore the image that the excellent MCU movies have burned into our minds with how these heroes look, the game actually has a very faithful recreation of the characters.

On the other hand, outside of the campaign maps, most of the environment feels bland and uninspired. Everything looks the same and it’s hard to make a mental map of the world in your head. Places like the Chimera is just full of nods and winks to easter eggs that fans will appreciate, while places like Utah badlands just feels like an AI created a random map filled with things to do.

I will give it this though, the game just knocks it out of the park when it comes to texture work and visual effects. It looks brilliant when you are duking it out with enemies and special effects are just bouncing around the map, or the highly detailed suits that the characters wear.

All this visual eye candy comes at the cost of performance and technical glitches. In some of the more crowded areas, the performance tanks to unplayable frame rates. I fell through the map twice, and once my character suit just completely glitched out. I also crashed more than a couple of times before the first patch hit, but I still encountered a crash when things got particularly heavy in a mission.

In terms of audio, the voice actors do an excellent job of portraying the characters. Notable names like Troy Baker and Nolan North are in the cast, so you know you are in for a treat every time a cutscene starts rolling. The sound effects are good enough, but feel a bit generic at times, although the satisfying crunch of beating down a enemy as Hulk never gets old.