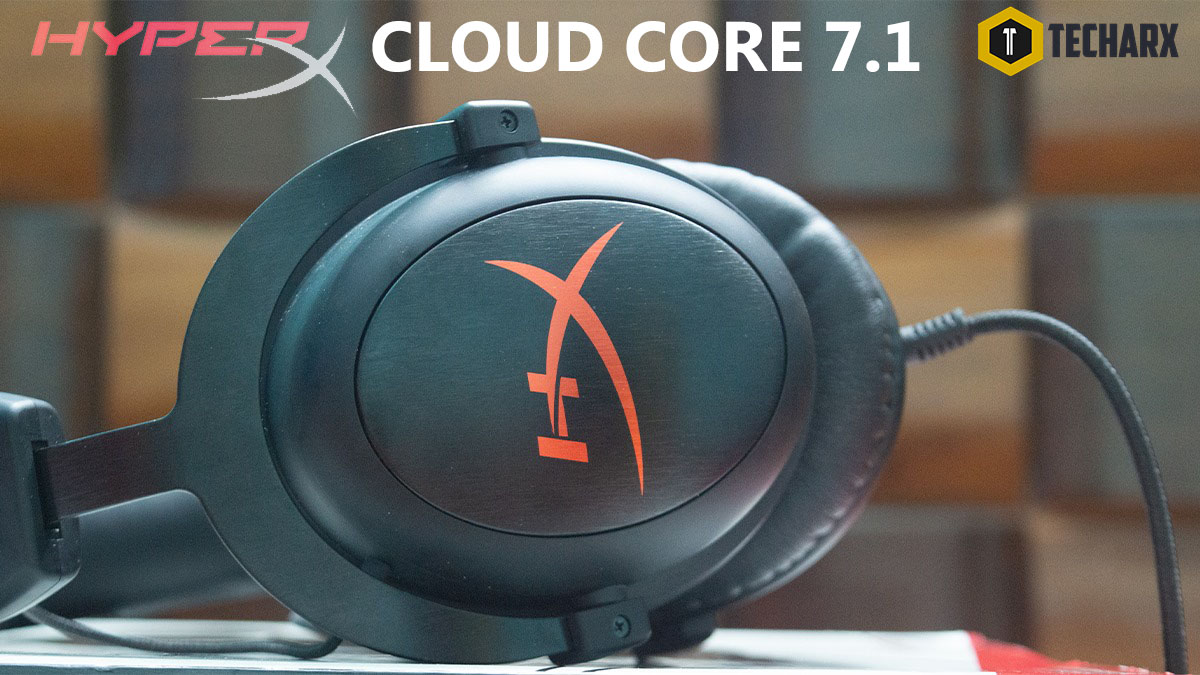 In terms of performance, the Cloud Core 7.1 sounded good with a variety of games, music, and videos. With virtual 7.1 surround sound turned on, games sounded very clear with not much problem regarding pinpointing footsteps and such. Although the microphone was not as loud as I expected with the audio control box, this was fine for online chats and casual gaming. Coming at around 6.5K INR the Cloud Core 7.1 is an affordable choice considering the comfort level it offers along with a no-nonsense audio experience.

HyperX released the Cloud Core 7.1 newly in the market to replace the previous Cloud II. Both come with a similar 7.1 USB soundcard, the soundcard also helps to adjust volume and toggle mic mute.

Unboxing – a Look The Packaging and the Contents Inside

The newer HyperX Cloud 7.1 doesn’t come with extra velour earcups, but it’s also cheaper than the Cloud II, still, I would prefer paying a small amount for the extra earpads as they do give you a little extra customization option in case you don’t like the feel memory foam and rather go with a breathable velour padding.

Apart from the earcups, the Cloud Core 7.1 is an welcomed upgrade sporting a solid metal headband, a USB amp for controlling volume and surround sound.

The headset has very good build quality and durability as seen in all of the HyperX Cloud series, build quality feels premium and the nice soft finish also feels great. The Cloud Core 7.1 is also very lightweight at around 300 grams, making it very comfortable to wear for long sessions. Few drawbacks of the build of the Cloud Core series would be that they don’t come with a detachable cord and the soft finish attract dust and get harder to clean over time.

Features and Specification of The New Cloud Core 7.1

Talking of the 7.1 surround soundcard, it’s an elegant and simple solution. The dedicated volume controls for both the mic and the headphones are really useful and you can mute the mic with a flip of a switch. The surround sound option is a good added advantage, it’s easy to toggle and adds decent taste to the mix for people who would want an expanded sound profile.

There are a few drawbacks to the 7.1 DAC which should be considered. The volume control options are not precise and can get pretty hard to find out your desired volume levels if you rely on the DAC alone to adjust your volume levels. On the other end, you’ve got no software support in case you want to change up the sound signature and tweak things to your likings, there are third-party equalizer options that you can still use like Realtek Audio Console or Equalizer APO.

Performance – The Pros and Cons of The Cloud Core 7.1

Wearing the Cloud Core 7.1, the headset is very lightweight. It was around 300 grams according to my scale with a little bit of cable and the microphone attached as specified.

In terms of performance, the Cloud Core 7.1 sounded good with a variety of games, music, and videos. I also did not notice any distortion during normal usage. The upper midrange to brilliance was slightly higher than what I was used to. However, this did help with clarifying dialogue in movies and pinpointing footsteps in-game. The bass frequency did produce good sound during explosions, but it was a little light when it came to music. Thankfully, the bass was light enough to not cause dialogue that sounded like the speaker has a tissue over their mouth while speaking with their nose pinched.

With virtual 7.1 surround sound turned on, games sounded very clear with not much problem regarding pinpointing footsteps and such.
Music sounded okay, but the extra reverb seemed to prioritize the music track over vocals. Although the sound quality was good, the microphone could be improved.
The microphone was very quiet even with the volume setting maxed out on the audio control box. However, there is a firmware update available on the site which takes care of the problem.

Conclusion – Our Experience With The New Budget Cloud Headset

Although the microphone was not as loud as I expected with the audio control box, this was fine for online chats and casual gaming. The Cloud Core 7.1 is not advertised as a streaming headset, but it is possible to achieve decent results with some tuning via software. With a good sound card, bypassing the audio control box and plugging it into the 3.5mm audio/microphone jack may improve the audio pickup of the microphone.

Coming at around 6.5K INR the Cloud Core 7.1 is an affordable choice considering the comfort level it offers along with a no-nonsense audio experience.