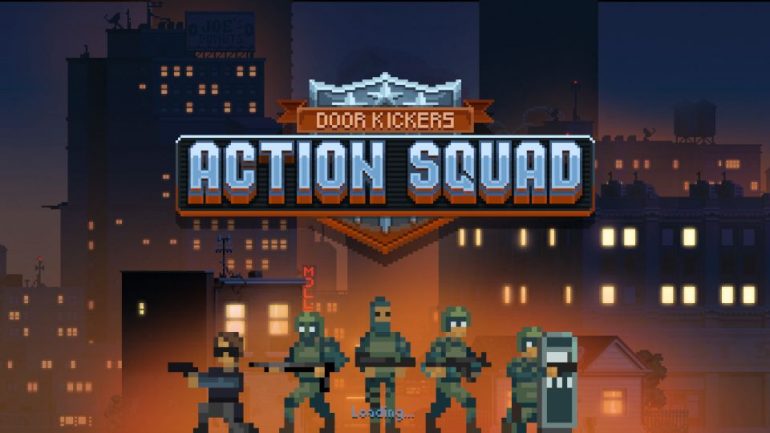 Back in 2014, a top-down strategy game called Door Kickers was released. It had you take control of a SWAT squad has you tactically took handled tense situations and saved hostages. It was one of the most unique and nail-biting experiences I had.

Well, it’s got a sequel now, and this time the apple has fallen really far from the tree. Like a different continent. And it came out guns blazing and time traveled back to the 90s.

Door Kickers: Action Squad is a 2D side-scrolling platforming shooter, that has you – a SWAT trooper taking out bad guys, disarming bombs and rescuing hostages(or accidently taking them out too).

It’s fast a paced, adrenaline-pumping experience that harkens back to the days of Metal Slug.

Your objective is deceptively simple. You choose a trooper from the 6 ones available, each with their own strengths and weaknesses. You choose your gear and ultimate ability and then you kick doors open.

And you shoot, can’t forget the most important part – spraying good old justice all over criminals.

But there’s a lot more to it than that. Recoil control is very important and if you don’t control it well, it’s going to hit everyone and everything except the bad guys.

Missions are divided across multiple levels and floors, sometimes with different gameplay elements mixed in. One floor might have a ton of crazy knife-wielding psychos while the upper floor might have suicide bombers that want to take you on a one way trip with them.

Like the old school games that inspired Door Kickers: Action Squad, platforming is present and important if you want to get the drop on your enemies. You can jump on top of various structures and use ladders to tactically position yourself and not get splattered all over the place. There are also secrets tucked away in hard to reach places that will need you to platform your way around to them.

Every class has different strengths and weaknesses, and every trooper has a standard and special attack which adds a bit of variety. You can also bring in a buddy to help you out in those tough situations. Both online and couch co-op modes are available.

There’s a ton of levels to play, an infinite mode, zombie mode and a bunch of difficult challenge missions. That’s two things that the game doesn’t lack in – pure arcadey action and content.

The game has an old school pixelated design with really high-quality sprites. Animations are overall well done and the special effects do a good job of really driving in the atmosphere.

On top of the old school graphics, there’s also a really well-done 80s inspired electronic soundtrack that really gets you in the mood for some good old fashioned shooting spree.

Despite being deceptively simple at first, Door Kickers Action Squad is a fast-paced adrenaline-filled experience that will keep making you come back for more. It has great old school pixel graphics and a heart-pumping soundtrack. Definitely a must-buy for anyone who loved games like Metal Slug and Bro Force.