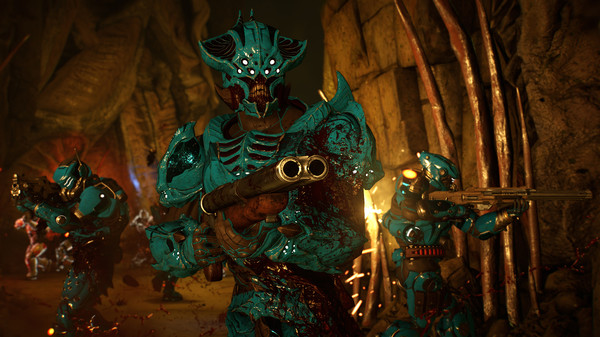 With the DOOM open beta finally upon us, it is now available for everyone to test it and see if it’s worth the money. Giving fans the opportunity to play the brutally fun and challenging shooter weeks before its release.

The multiplayer beta allows you to test a few maps, Heatwave and Infernal, and two modes, Team Deathmatch and Warpath, along with never-before-seen weapons, armor sets, taunts and hack modules. But it seems not everyone is happy regarding the beta.

“This isn’t Doom. This isn’t old school, and they aren’t going back to their roots (maybe they just forgot what it use to be about?), so stop saying it is. It’s another generic, modern military shooter with a hellish look. The speed of the gameplay, the weapons, the announcer, the lack of screams/grunts from Doomguy, extremely limited level editor and no mod tools…. it just screams “not Doom”. The only similarities to “Doom” is that there’s no health regeneration and it takes place in hell. The game could have been tons better had they not tried to use Doom’s name and falsely advertise it as an old school shooter going back to it’s roots.”– steam user EARTH had this to say about the Doom open beta. 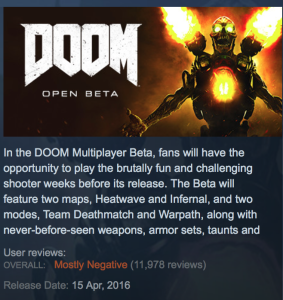 The Doom open beta has received a 37 % approval rating on steam. Main complaints regarding the Doom open beta, are that the game feels too generic and too similar to Halo/Call of Duty in the eyes of the long term fans who have been waiting a lot to put their hands on this long anticipated reboot.

While major gameplay changes cannot be expected this far in, it remains to be seen if some of the issues can be resolved.