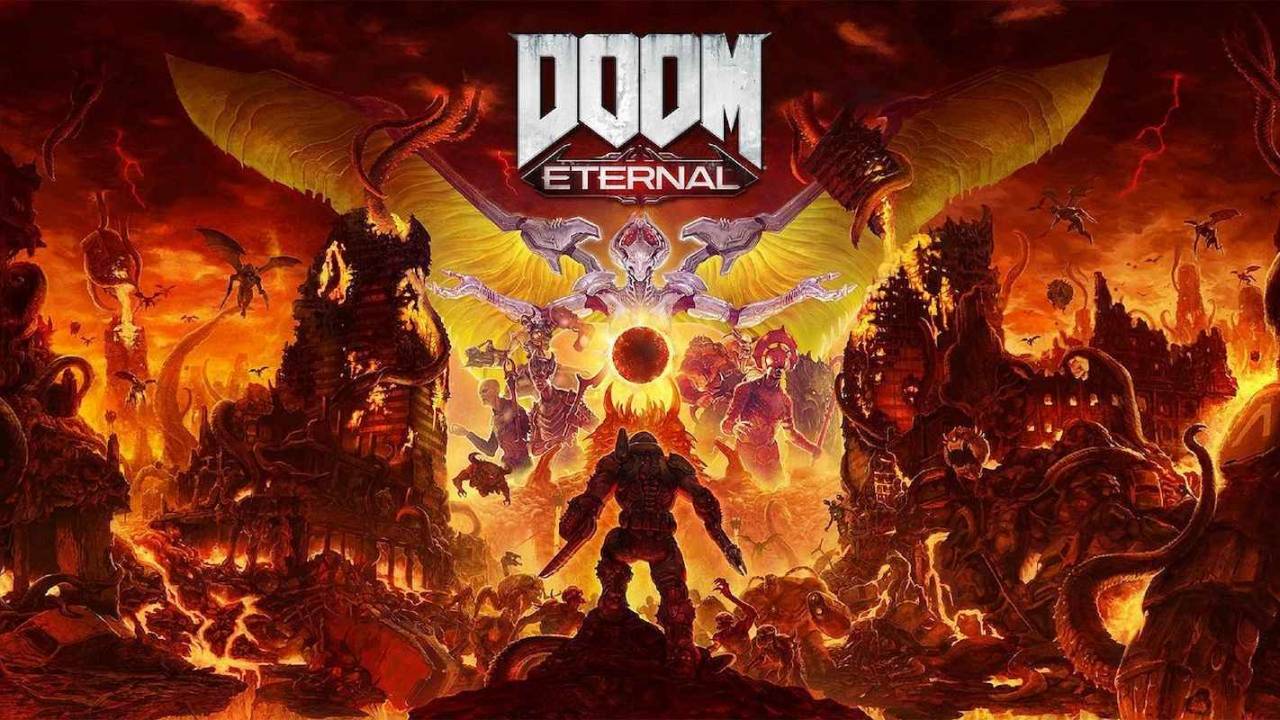 DOOM is pretty much considered the grandfather of the FPS genre along with its predecessor Wolfenstein. Pioneering the art of slaying demons since the early 90s, DOOM Eternal is bigger, better, and more impactful than a shotgun clip to the face of a hellspawn.

Doom Eternal improves upon the excellent foundations that 2016’s DOOM reboot laid. From a bigger emphasis on story to expanded combat mechanics and improved gameplay.

First off, let’s talk about the gameplay because id Software has remixed up the core gameplay quite a bit. It’s still as easily approachable as before but at the same time not easy to master. The difficulty has remained well balanced, and there’s a very smooth difficulty scale. There’s a very steady stream of challenge level after level, but it never overwhelms you.

Onto the new elements that DOOM Eternal adds, it has an even more “complex” gameplay system than in the past. There a huge emphasis on mobility this time around, and you can double jump, and dash your way around the arena. These add a layer of verticality and make having continuous momentum the key to surviving.

But that’s not the only new addition and there’s also new mods, support weapons and a bigger arsenal of weapons. Each of these side weapons has separate cooldowns and serves a different purpose, and you can chain together these abilities to deliver devastating punishment on the hellspawn.

Runes, which return from 2016 also serve a big purpose in the game and allow you to augment your skills with buffs as well as upgrade your health, armor, ammo or other stats.

Whereas in the previous game mods and grenades were a useful addition, in Eternal not using these means certain death, especially on higher difficulties.

The open nature of the levels means that there is also an increased number in hellspawn and other environmental hazards to face. This means that it’s equally important to manage your ammo and health, and while Eternal is generous with its placement of pickups, in the heat of the battle gory kills and chainsaw executions are your best friends. You are continuously encouraged to be more aggressive and agile, dancing around the arena delivering pain and ripping apart demons in the most satisfying way possible.

The enemies all have weak points and are well designed. Not to mention they quite literally fall apart when you shoot at them, it feels extremely satisfying to fight your way through. New types of enemies will constantly appear in each level, meaning levels never get stale. The boss battles are also just as tough and satisfying, and there are quite a few surprises for Doom lovers here.

Doom has never been about the story. Yes, there’s always been some backdrop about the demon invasion and other sinister factions but the emphasis has always been on one thing – slaying demons. DOOM Eternal, however, focuses quite a bit on the story aspect and builds on the barebones lore established by the previous game.

At the beginning of DOOM Eternal, you find yourself on a citadel floating in orbit around the Earth. Earth is being devastated by infernal forces: billions of dead, demonic growths everywhere led by three evil priests. In short, business as usual for our Slayer.

There’s a multiplayer mode this time as well but it’s limited to the Battlemode, which is a 2v1 arena mode where two players take control of demons and one player becomes the slayer. This is a twist in the original asynchronous multiplayer games formula where it’s usually the monster that’s overpowered and needs to hunt the team of humans. There are an XP system and unlockable cosmetics that you can earn from doing challenges. While the Battlemode is really fun and engaging, I would have been happier if there was a traditional arena deathmatch mode included as well.

Doom Eternal looks glorious even on the base PS4 and runs with no hiccups thanks to id Tech 7, the next-generation graphics engine used for DOOM Eternal. On PC, the game is really well optimized and does not have an FPS lock. On PS4 Pro and Xbox One X, the game runs at 60 fps and upscaled in 4K. On classic PS4 the game runs at 1080p @ 60 fps, while Xbox One and One S at 900p (upscaled up to 1080p) always at 60 fps. All versions except the classic Xbox One version also support HDR. id has done a fantastic job overall.

Of course, it isn’t a Doom game without some adrenaline-pumping music and boy, oh boy does DOOM Eternal deliver. Composed by industry veteran Mick Gordon, the sounds of DOOM is a big part of what makes demon-slaying such an exhilarating experience.

As a result of an open casting call, the choir includes names such as Tony Campos (Ministry; Static X), Sven De Caluwe (Aborted), Linzey Rae (The Anchor), and more. Mick, alongside the talented sound team at id Software, created the choir’s signature chant, pieced together from a mysterious and ancient language that harkens back to the Slayer’s origins.

DOOM Eternal improves on the excellent 2016 reboot in every way and manages to feel more doom-like than any of the modern renditions. It has some of the most satisfying combat mechanics in the genre and the more open-ended map design gives Eternal a high degree of replayability.

The difficulty might get to you at first and you might be tempted to play the game at lower difficulties but trust me when I say this, DOOM Eternal is one of the few games that’s worth the nightmare.