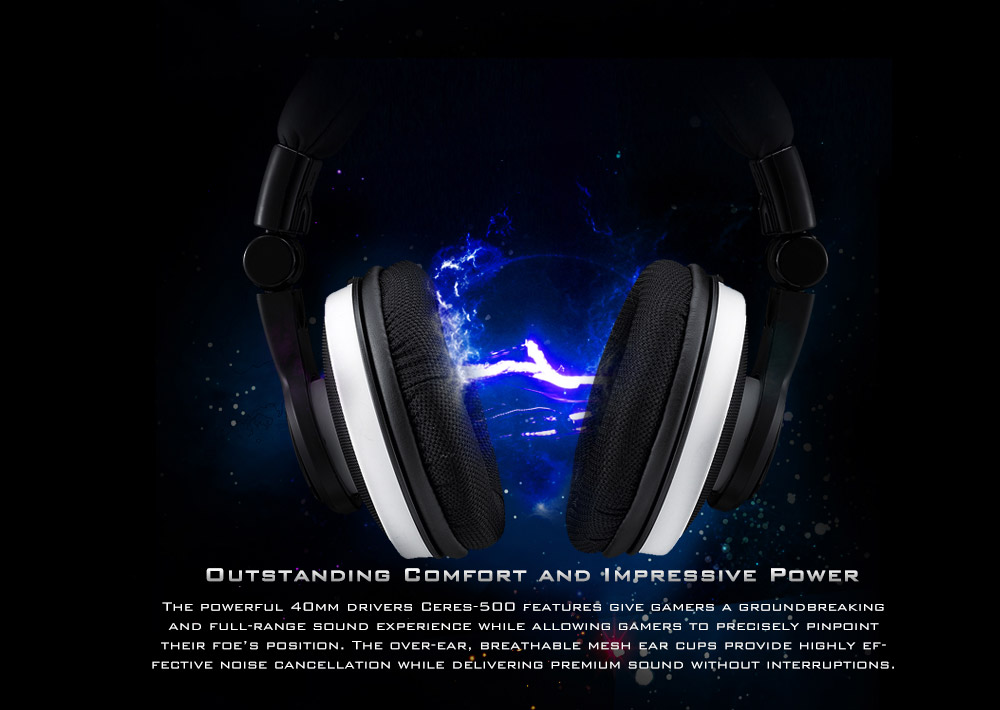 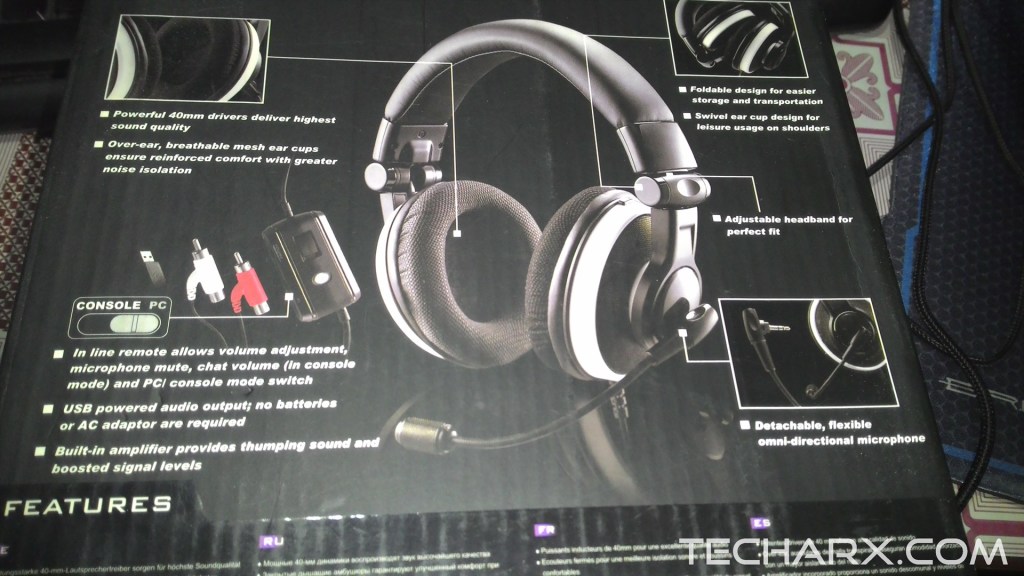 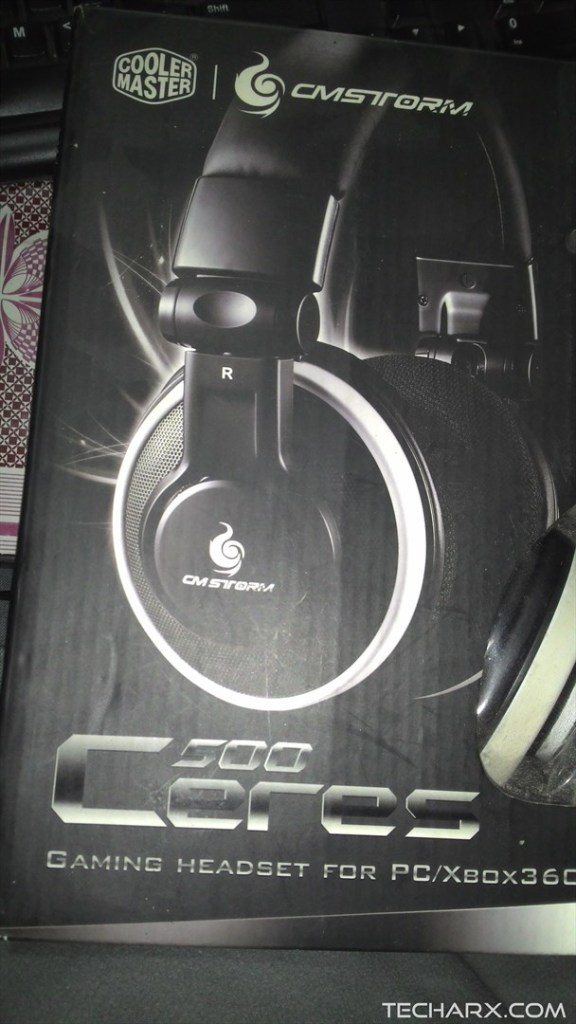 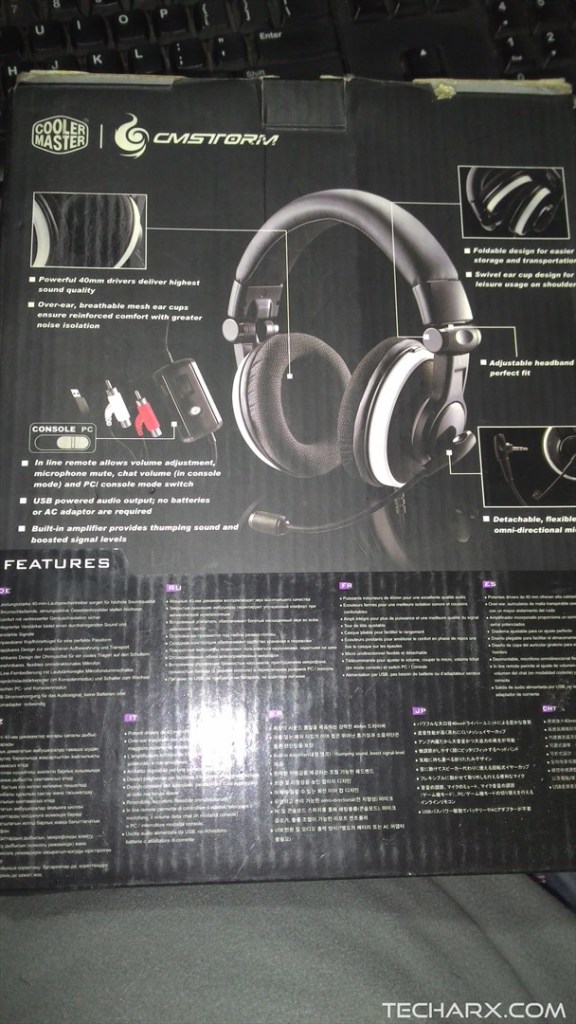 The CM Storm Ceres 500 is certainly a looker when unpacked and pulled out of the box. In spite of being an entry level gaming headset it doesn’t feel anything like that when hold in hands. This black and white schemed piece of audio equipment really gets the impression going as we move forward to see what else is inside the box. 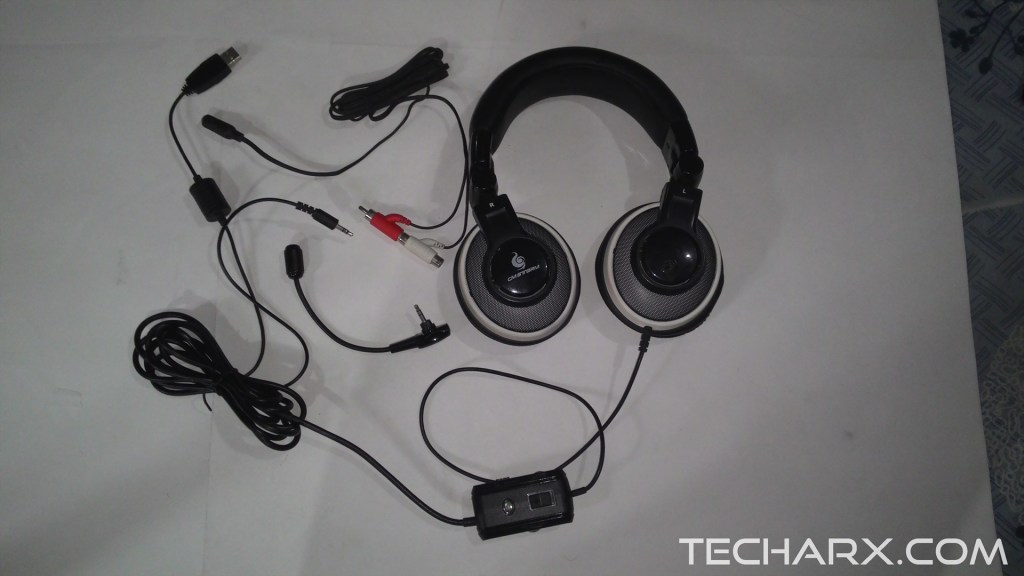 The nice looking black box comes with the headset’s detachable microphone, a 3.5mm to RCA pass–through cable, user manual and quick setup guide. So let’s get a closer look at the headset and it’s accessories. 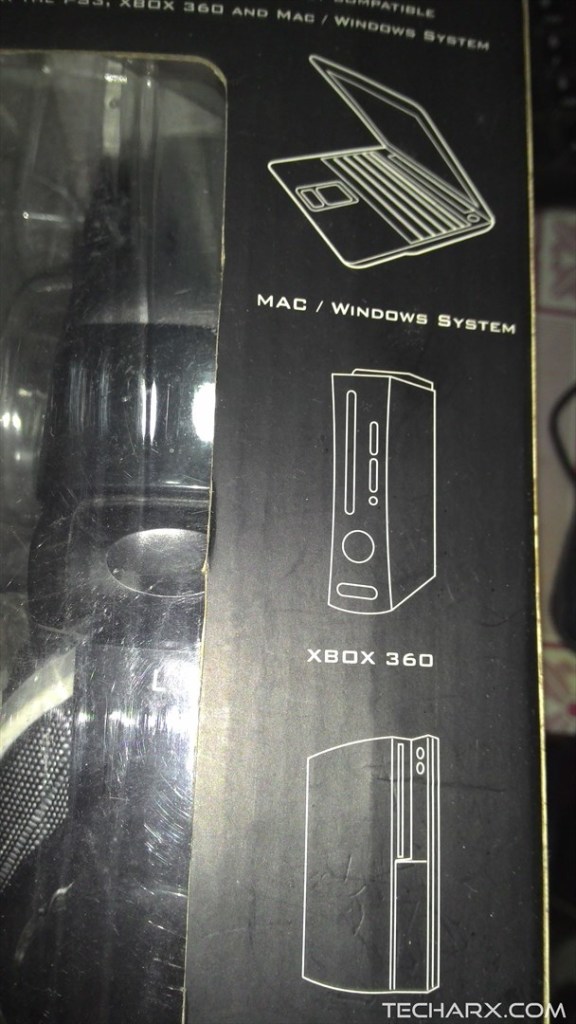 As we start off with the packaging, it is really well housed in an impressive black box with enough information of it’s features and technical specifications. The front side also gives a peek of the actual unit along with the usual picture of the headset.

There’s a user manual and a set-up guide , the usual along with a 3.5mm to RCA pass–through (for consoles) and it’s detachable microphone. 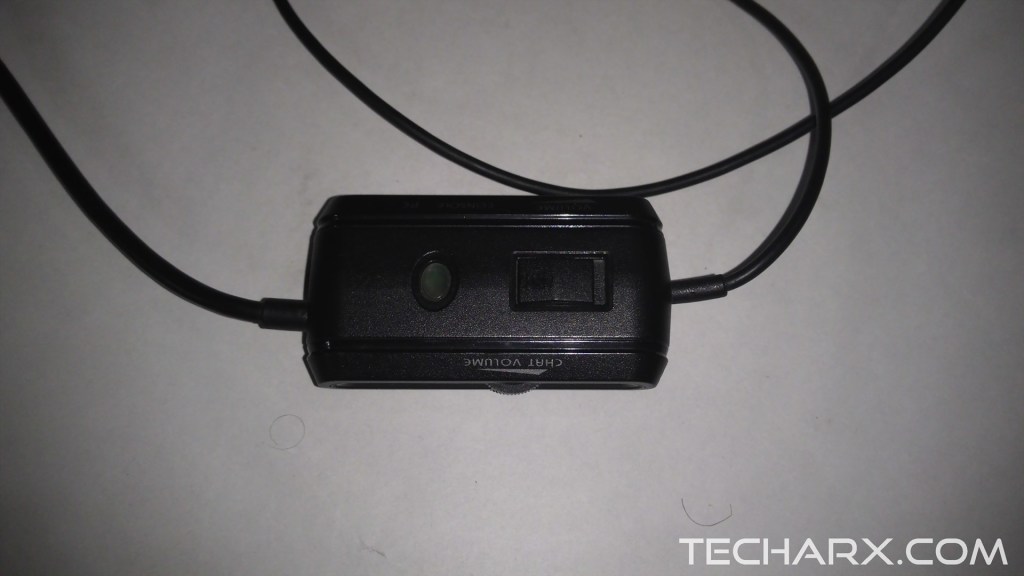 The microphone is totally flexible for easy adjustment but also very well built at the same time. 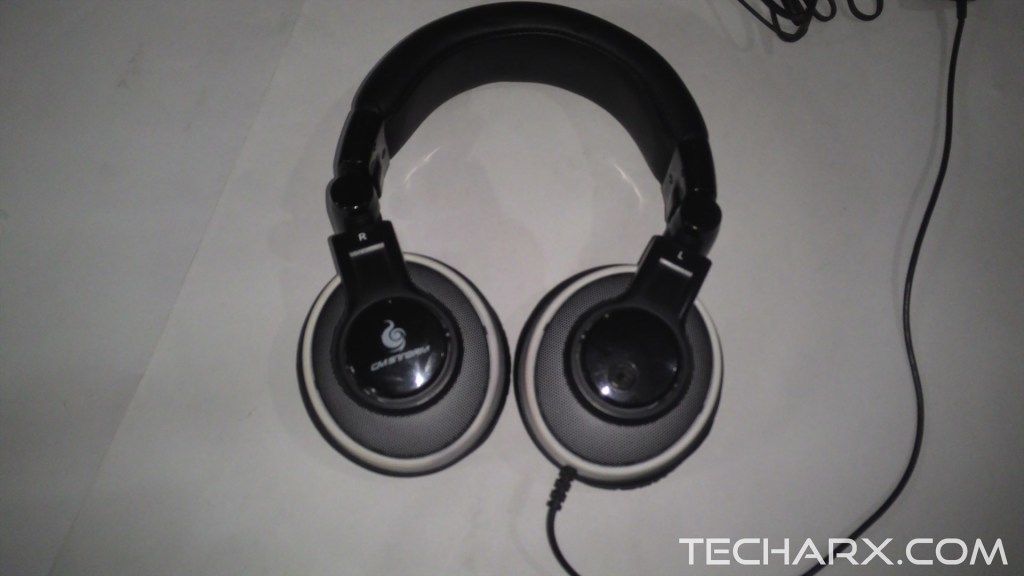 Now coming to the main unit , from the first touch the superior build quality of this headset is felt. The cups are rotatable to 90° which might add in some extra comfortable wearing options and also they are foldable which makes it compact for carrying around. The right cup sports the CM Storm branding and the left has the port for connecting the microphone. 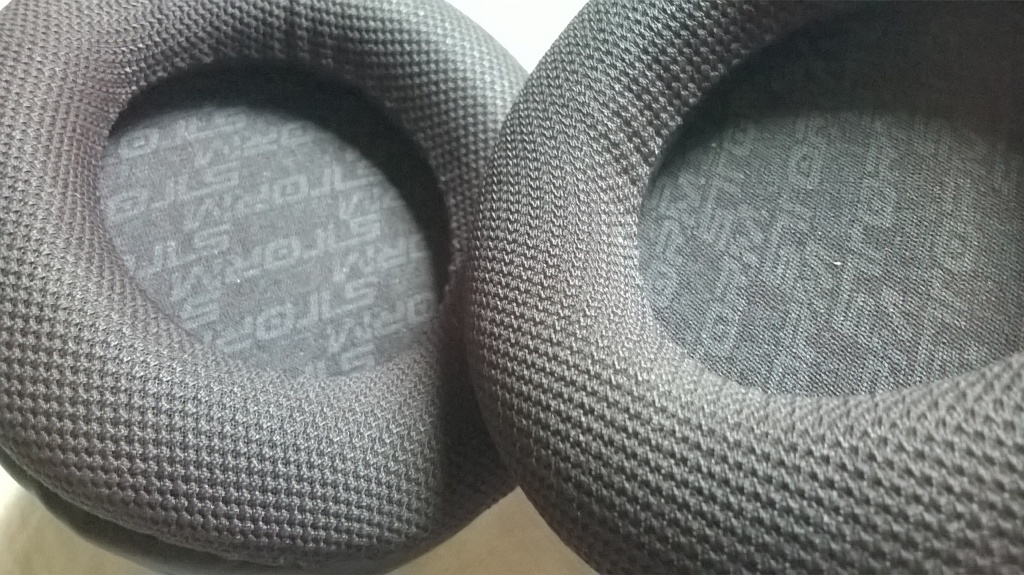 The ear-pads look well knitted and durable. The quality of the foam used appears to be of decent quality and comfortable enough for long gaming sessions. The sturdy joint of the foldable and rotatable cups also back up this well built product further with the assurance of durability.
The headband is adjustable as usual and very well padded with leather for the ultimate comfort.
It sits right over the ears firmly and with the support of leather-padded headband and quality ear-pads there’s not much room for complain about comfort, which is a very important aspect in gaming headsets. 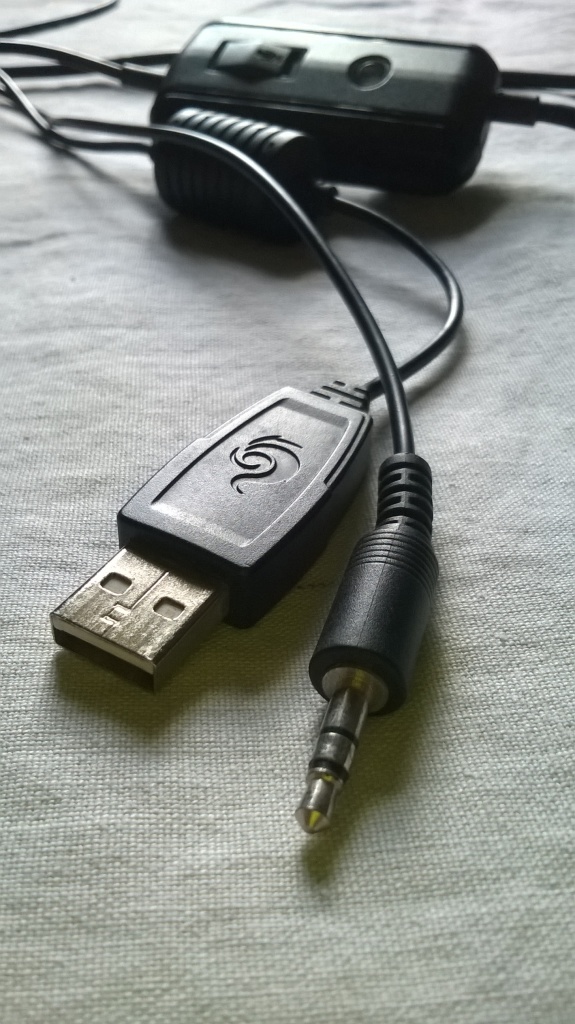 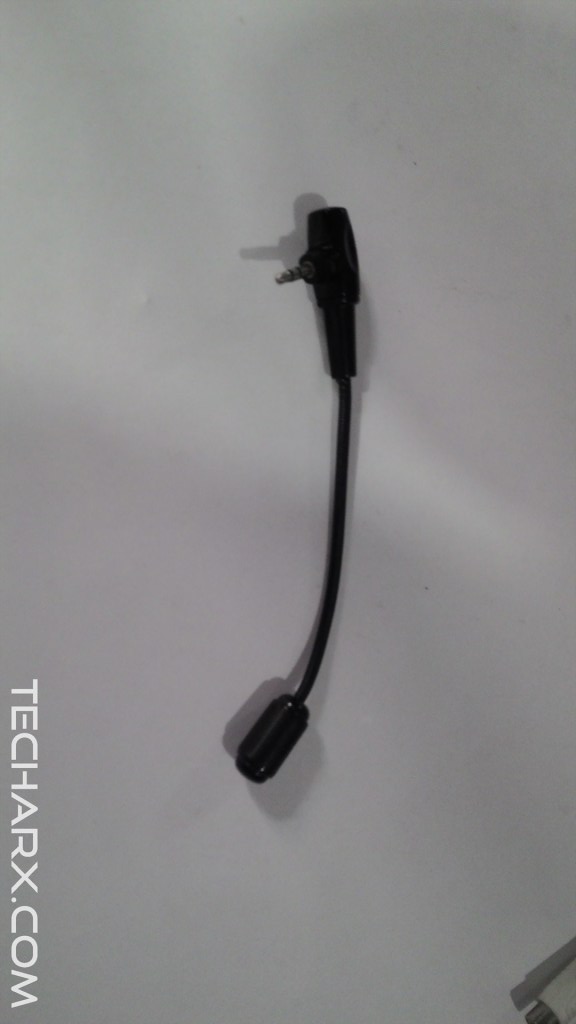 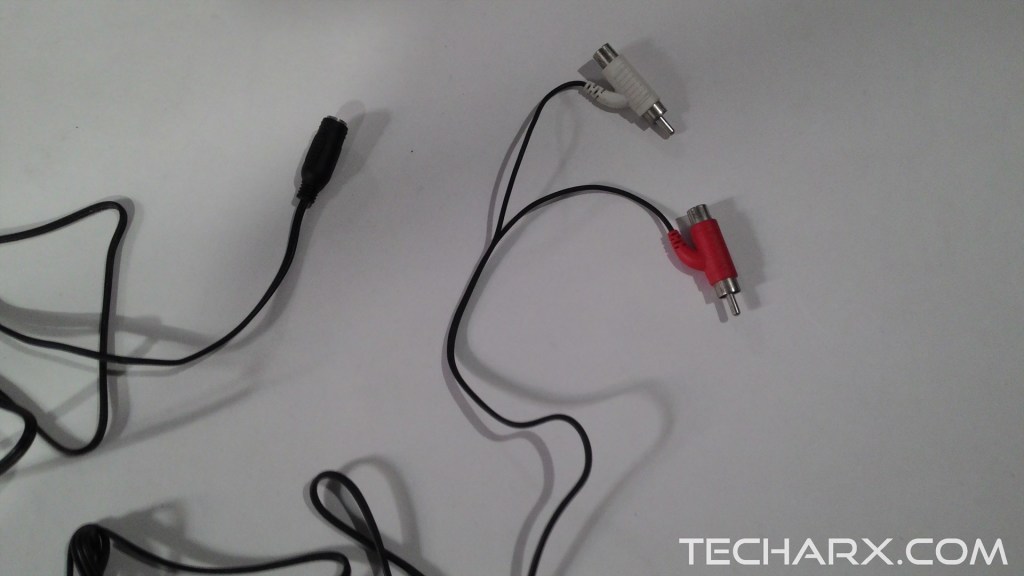 The 3 meters connection cable is somewhat more than what others provide for the price and again quality of the cable is sweet. The in-line remote is really nice and spacious enough to properly hold two separate volume knobs for the mic and headphones as well as a mic mute button along with it’s LED indicator and last but not the least , a PC / Console on-the-fly switch.  This in-line controller also houses the amplifier and the whole unit is powered by an USB cable which means it will be needing an USB port to function on any system. For PC, only the USB connection is required as it acts as the audio connection too but for consoles and other media devices it might need both depending on their audio configuration.
After taking a closer look at the unit it’s very clear that no compromise has been made whatsoever with the build quality and comfort for the price-tag it comes with but we’re yet to find out how well it fares in audio quality , which is the most important aspect of judging any audio equipment.

Keeping in mind this is a stereo headset we start to test it out on various games with in-game audio configuration set to headphones/stereo wherever possible. It sounds totally loud and clear (thanks to the in-built amp) so no complain on that part. However, it might feel as if there’s not enough low end thump or the rumbles and ground shaking moments etc. are not felt that good with the Ceres 500 and the main reason of that from what it looks like is this one lacks some bass. Having said that , it can be improved a bit by bass boosting manually from audio driver, although overdoing that will add distortion on the low end but a subtle boost can improve the overall experience with this headset.

The detachable microphone is also very clear and crisp sounding and sensitivity is very good, so basically it performs as told. Nothing much to say about it really , considering it will be used for VoIP it won’t disappoint, at all.
Now moving on to some in-depth test with popular games to see how well it can live up to the expectation of the gamers.

So as far as gaming is concerned the Ceres 500 performs very well, delivering crisp sound, sharp details and an overall enjoyable experience. Now let’s see how well it does with media as many of like to have one headset for gaming as well enjoying music and movies.

Now there is this common issue with many gaming headsets is they don’t perform that good with media, especially music and the main reason for that is they simply lack the sound reproduction quality of normal headphones, and the CM Storm Ceres 500 is no different. Although it sounded very nice on almost every game that we tried, but it just couldn’t deliver the same experience when we put on some music. The lack of bass was felt instantly and also the mid-range and treble felt a lot colored. In some cases the treble section sounded a bit distorted. That said, it shouldn’t really bother the casual users but if you have sensitive ears and/or picky about audio quality then the Ceres 500 will probably not please you in the media department.
For movies it is quite enjoyable, both Blu-ray and other lower quality internet streams. Being a stereo headset it handles surround audio decently.

Now time for sound check with some popular songs.

(Note: The records used in this test are in 16/24 bit lossless FLAC format so all these minute details might not be noticeable in the same way when used with lossy media such as MP3, AAC etc.)

Now moving on to some in-depth technical specifications, the Ceres 500 provides an overall good wide soundstage for it’s price tag. On bass test it was audible up to 35 Hz, so the lack of bass can be compensated up to some extent by manually bass-boosting and EQ’ing from audio driver.

As an entry level product with price tag of 4,000 INR the CM Storm Ceres 500 is surely a good one. For a stereo gaming headset it does it’s job just fine. Snug fit, crisp and clear audio with in-built amplifier, big remote with plenty of controls, detachable mic and a premium finish.
It’s also compatible with both PC and consoles (and also some other media devices).
Now there are some cons as well and the first is it being USB powered , which is probably due to the built-in amp that needs extra juice to operate. However it’s not so much of a problem with PC but for other devices it might be. Also another thing is the lack of bass which makes it not a  very good option for people who are looking for heavy media usage. That being said, this could be improved a bit with manually tweaking EQ settings as mentioned previously. Also the Ceres 500 works very well with virtual surround , so again a great option for people who want to enjoy surround audio without breaking the bank.

Bottom line, if you are looking for a nice sounding budget gaming headset for one or multiple platform then CM Storm Ceres 500 is definitely worth giving a shot. It can handle casual media well enough but for heavy media usage I would recommend looking at other options.