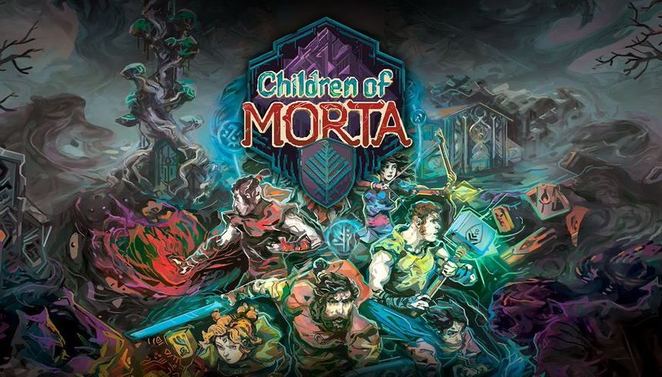 Children of Morta is an action role-playing game by Dead Mage that chronicles the story of a family and their fight to protect their mountain from the evil forces of corruption.

Players follow the story of the Bergson family, who have guarded Mount Morta for centuries. Their life seems to go by peacefully until the day when Corruption begins to spread throughout the world. The responsibility of purging the world from Corruption lies in the hands of the family.

The Bergson house not only serves as a hub area for delving into dungeons and character progression, but it is also the place where you get to peek into the lives of the Bergson’s, as they try to go about their lives. Their interpersonal relationships and hardships serve as a reminder that while they might be heroes, they are people with emotions.

Each of the Bergon family members serves as a particular classical RPG archetype, we have a warrior, an archer, a magician, a monk and so on, all with their skill tree, their strengths and their weaknesses.

Every one of the playable Bergson’s has an unlockable passive that affects the entire family, pushing you to play with every one of them.

What is another unique offering from Children of Morta is the death mechanic. While roguelikes are no stranger to dying often, Children of Morta is a rogue-lite experience, you can die but you will just be teleported back to your house and the story will move forward. This is a very interesting feature that allows you to experiment and play aggressively because even if you do end up dying you will still retain your character and any loot you acquire.

There are no permanent equipable items in this game, instead, it is possible to improve life points or attack power and other stats in the uncle’s forge using Morv, the game’s primary currency.

Grandma, the family matriarch, on the other hand, gives you bonuses linked to the effects of runes and obelisks that are encountered while playing. There are also artifacts and charms you can find while delving in dungeons but they are lost once you die.

Of Monsters and Bergson’s

Children of Morta dungeons are procedurally generated and are divided into large areas, full of monsters to be vanquished. There are also mini-games on some levels, that gives you extra loot. These can be mini-missions requiring you to team up with your other family members and simple puzzles to a fully-fledged game of pong.

Combat is very straightforward and requires you to mostly smash the X button. What is more important is knowing when to dodge or block in some cases, when to cast spells and when to just run away. Because the game screen can become hectic and reminiscent of bullet hell.

Children of Morta’s pixel art is simply gorgeous. Dead Mage has done a terrific job of bringing the world of Morta alive, the scenes have a depth to them despite being 2D and while you can’t actually see the facial expressions of the Bergson of family members, you can feel their emotions.
Characters are well characterized and wonderfully animated.

The issue, however, lies with procedurally generated dungeons. As it is an issue with so many other procedural games, the repetition starts to creep in a few dungeons later. But the tilesets are varied, and thankfully the level design is compact so you don’t end up spending too much time in one dungeon.

Children of Morta is a charming game, it is one of those games that comes out once in a while and manages to warm your heart, surprising you with its unique characteristics. While the repetitive combat and dungeons hold back the game, its the charm and fresh perspective on roguelikes that gives the game a deserving spot as one of the best indie games this year.