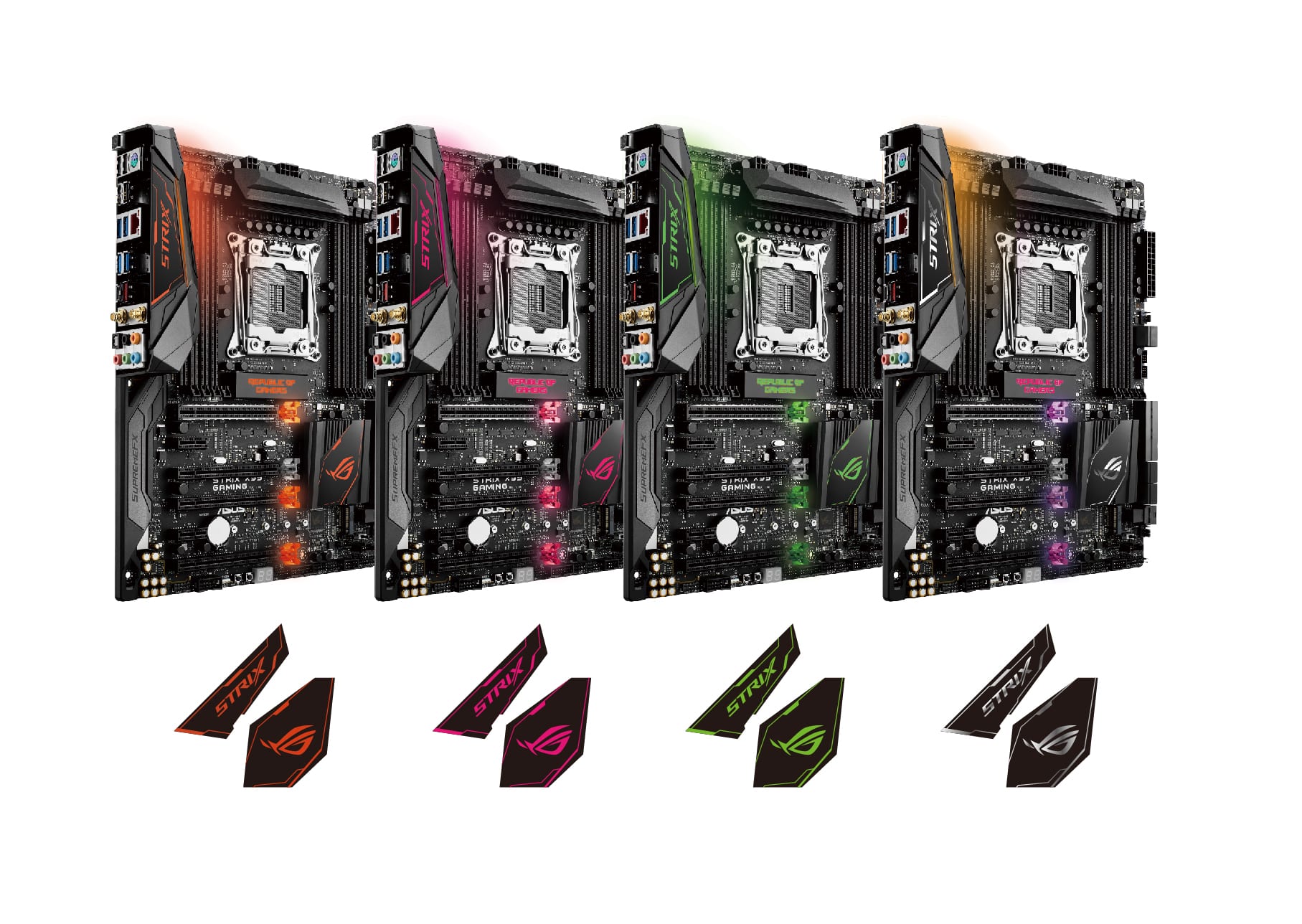 Seems like this is the season of RGB LEDs, and keeping up with the tradition and the imminent Broadwell-E launch Asus today announced Four new X99 Motherboards.

Before we dive into Individual motherboards one by one, let us take a look at what features sets them apart from the current X99 crop from Asus. the feature-set includes multiple categories like RGB lighting, expansion slot reinforcement, and cooling management.

Lets take a look at the motherboards one by one.

Asus X99-E : The Little One Without All The Bling

First Up Asus has the X99-E, the little brother of the pack and the new entrant. 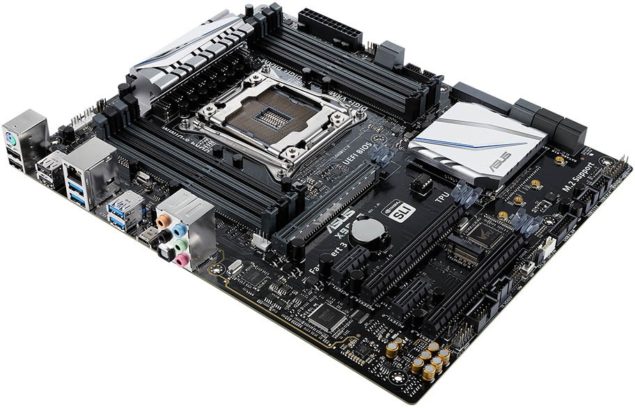 At $219, it’s a great option for anyone looking to adopt Intel’s high-end desktop platform on a budget—and without sacrificing the essentials. The X99-E takes full advantage of the platform’s copious PCI Express bandwidth, using it to fuel a trio of x16 slots with support for three-way CrossFireX and SLI configs.

Only one of those is embedded with SafeSlot metal reinforcements, but they’re all anchored with additional solder points to prevent separation due to rough handling.

The X99-E supports up to 128GB of memory, but speeds top out at DDR4-3200 instead of DDR4-3333.The lack of a native U.2 connector is another small concession; the workstation- and server-grade SSDs that use the standard aren’t as popular with the budget-conscious users targeted by the X99-E. M.2 SSDs are much more popular with that crowd, so the board has an ultra-fast M.2 slot linked directly to the CPU with a PCIe 3.0 x4 link.

With Aura lighting limited to the onboard RGB LEDs, the X99-E isn’t ideal for modders to want to light up entire systems with separate strips. But you still get the important stuff, like a reliable Intel Gigabit Ethernet controller and a reversible Type-C USB 3.1 port. The board even has the same number of power phases feeding the CPU and memory as its higher-priced Signature siblings. 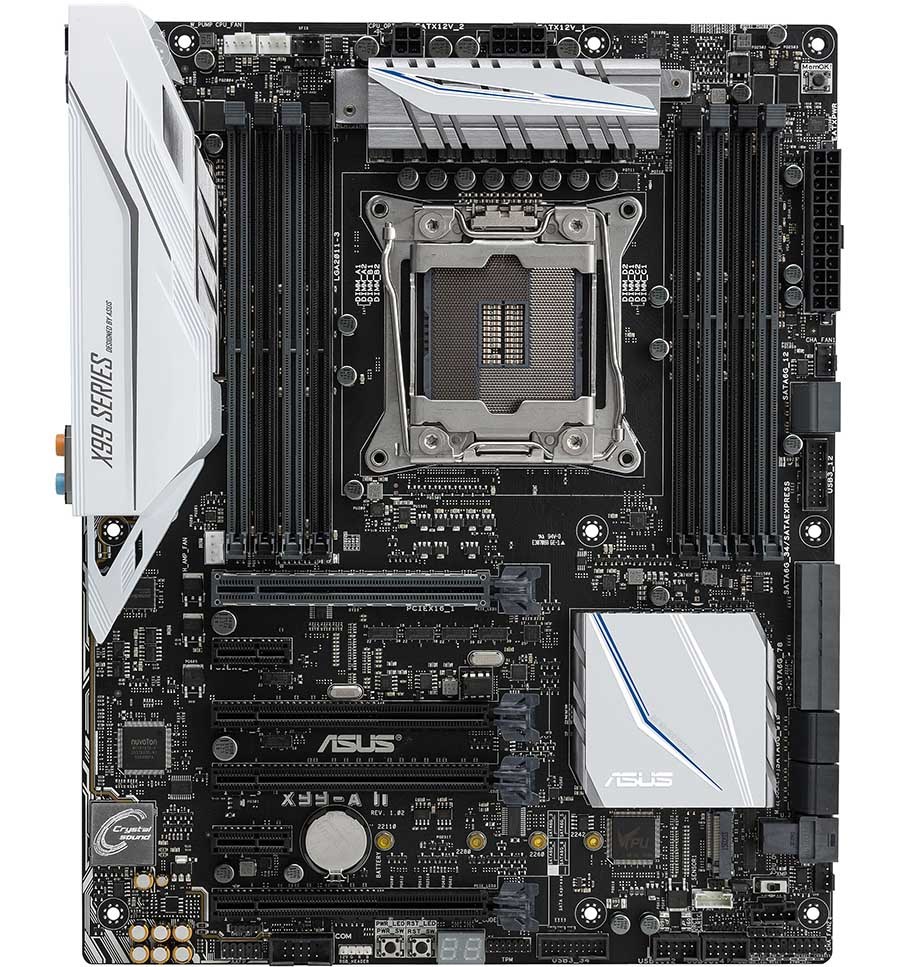 With a 249$ Price tag,the X99-A II makes fewer compromises than the X99-E.The extra scratch buys a header for RGB LED strips that can add a lot of visual impact for modders or anyone with a case window. You also get a native U.2 port that’s perfect for pairing with Intel’s awesome 750 Series SSDs. U.2 connectivity comes with a side order of M.2, but two interfaces share a PCIe 3.0 x4 link, so they can’t be used concurrently.

While the X99-E is limited to a single Type-C USB 3.1 port, the X99-A II delivers the 10Gbps standard in both reversible Type-C and backward-compatible Type-A flavors. Having both ports is particularly handy given the relative scarcity of USB peripherals that use the new Type-C connector.

To help newbies with the Pc Building, the X99-A II comes with a special installation tool that them to insert the CPU into the socket without bending pins or causing other damage.And the board supports USB BIOS Flashback, which lets you flash the firmware with only a USB drive and power supply connected. These extras may not be exotic, but they make system assembly easier, especially at scale. 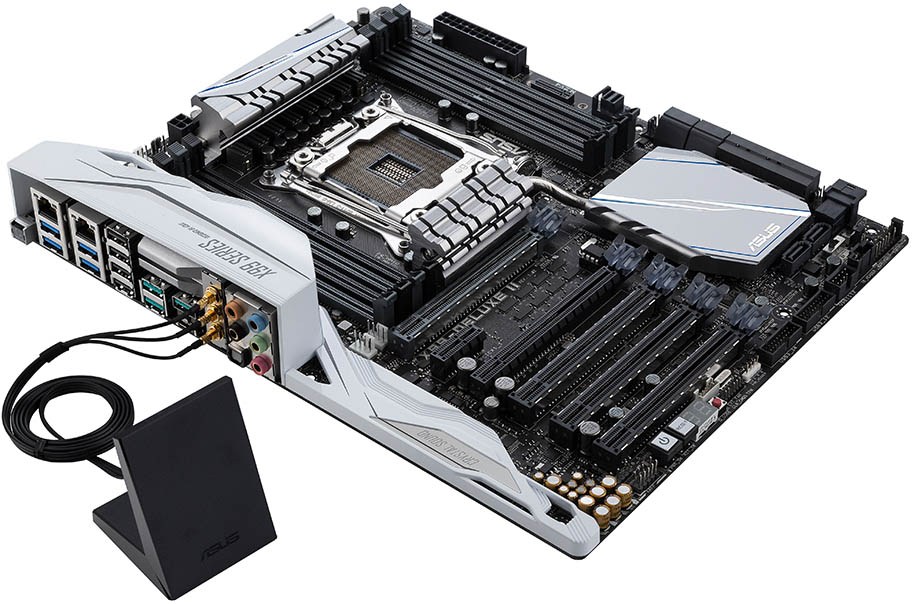 The $419 X99 Deluxe II is quite a bit pricier than the other Signature boards, but it ups the ante accordingly. Networking gets the biggest upgrade, with the addition a second Intel Gigabit Ethernet controller for wired connections and a dual-band Wi-Fi module for wireless ones.The Wi-Fi module pushes 802.11ac over a 3×3 antenna for transfer rates up to 1300Mbps, which exceeds the speed of wired Gigabit connections. MU-MIMO support provides a boost with compatible routers, while Bluetooth support brings compatibility with wireless peripherals. All that is built right into the board, without sacrificing expansion slots.

The X99-Deluxe II is the only board in the bunch with four PCIe x16 slots tied to the CPU. These slots can be configured with an x8/x8/x8/x8 spread that distributes bandwidth evenly across four cards. They all have full SafeSlot reinforcement, too.

With dual U.2 ports and one M.2 slot, the X99-Deluxe II is ripe for cutting-edge PCI Express SSDs. Asus doubled up on U.2 instead of M.2 because its cabled interface takes drives off the motherboard. This moves them away from the heat surrounding the CPU and GPU, and it gives drives enough room to incorporate heatsinks that further reduce temperatures. Multiple tech sites have demonstrated thermal throttling that reduces performance on popular M.2 drives, making U.2 the best solution for sustaining peak speeds.

In addition to the onboard features, the X99-Deluxe II comes with a bunch of extras that plug in, including a ThunderboltEX 3 card based on Intel’s Alpine Ridge controller. The card adds Type-A and Type-C USB 3.1 ports, and the latter doubles as a Thunderbolt 3 connector. This latest edition of the Thunderbolt spec pushes a 40Gbps over a single cable—four times the bandwidth of USB 3.1—and it’s capable of sharing that pipe between up to six daisy-chained devices. As an added bonus, the ThunderboltEX 3 supplies up to 36W to fast-charging USB devices. Combined that with the extra USB 3.1 ports on the board itself, and the X99-Deluxe II has the capacity to connect loads of high-speed external devices.

The included Fan Extension Card provides headers for three more fans and three thermal probes, bringing the total number of temperature-controlled fan headers to nine. You can manage all the cooling for even fully-loaded systems with a single Fan Xpert interface. A thermal sensor is included in the box, too, along with a low-profile HyperX M.2 x4 card that lets M.2 SSDs connect via PCI Express expansion slots. All these extra cards are sold separately and compatible with the other boards, but they help solidify the X99-Deluxe II’s premium status right out of the box. This is the board you want for a serious workhorse capable of having its share of fun on the side. 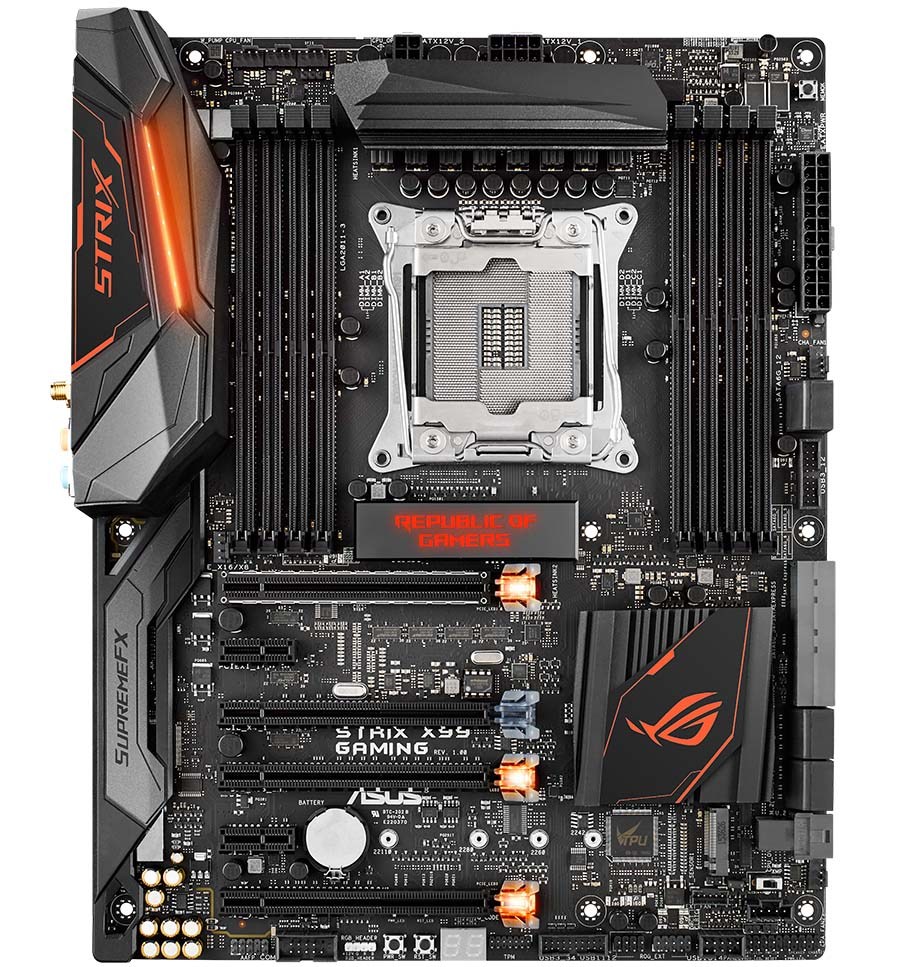 ROG Strix X99 Gaming dares to be different ,while the Signature series sticks to a reserved monochrome colorway.Its blacked-out board is punctuated by neon orange decals that echo the copper accents of some of our new ROG products. There are three sets of decals in different colors, so you can change the look to match the rest of your system. Additional RGB lighting around the I/O shroud and central ROG badge adds to the customizable appearance, making the Strix perfect for modders and gamers who want to define their own style.There’s more to the ROG Strix X99 Gaming than just its appearance. The number of slots and ports is similar to the X99-A II, but the networking is bolstered on two fronts.

A dual-band 802.11ac Wi-Fi module adds wireless to the equation along with the requisite Bluetooth connectivity. The 2×2 antenna tops out at 867Mbps, which is slower than the 3×3 solution on the X99-Deluxe II, but there’s still more than enough bandwidth for fast file transfers and smooth online gaming.

Asus GameFirst IV software further enhances networking performance by learning your habits and automatically prioritizing traffic to prevent things like P2P transfers from lagging critical gaming packets.Rather than using the same Crystal Sound 3 audio as the Signature boards, the ROG Strix X99 Gaming employs dual amplifier chips to improve output for speakers and headphones. Sonic Radar II software adds another wrinkle by mapping the direction and origin of game audio on a configurable overlay that gives players an edge on the battlefield.

Also on the software front, the ROG Strix X99 Gaming comes with an ROG RAMCache utility that takes storage performance to another level. RAMCache allocates an adjustable portion of system memory to caching the data you access the most, enabling much faster storage performance than even the best SSDs. It’s perfect for the X99 platform, where support for up to 128GB of memory allows the creation of truly massive caches, and the CPU’s quad memory channels offer higher speeds.

A new recruit in Republic of Gamers, the $339 Strix X99 Gaming fills the gap between the X99-Deluxe II and X99-A II. It’s easily the rebel of the bunch—but not without a cause. The collection of gaming-centric features and customizable cosmetic flourishes put the Strix right in the hottest portion of the PC landscape. 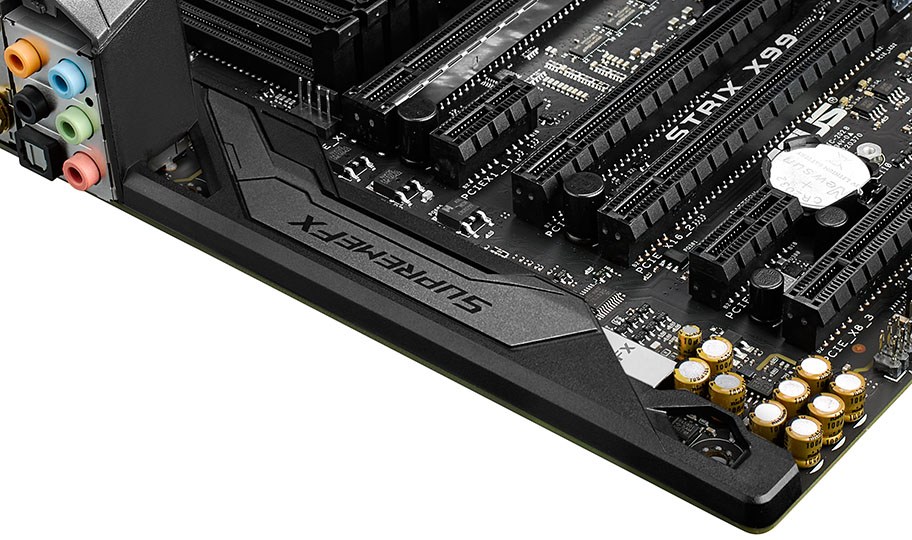