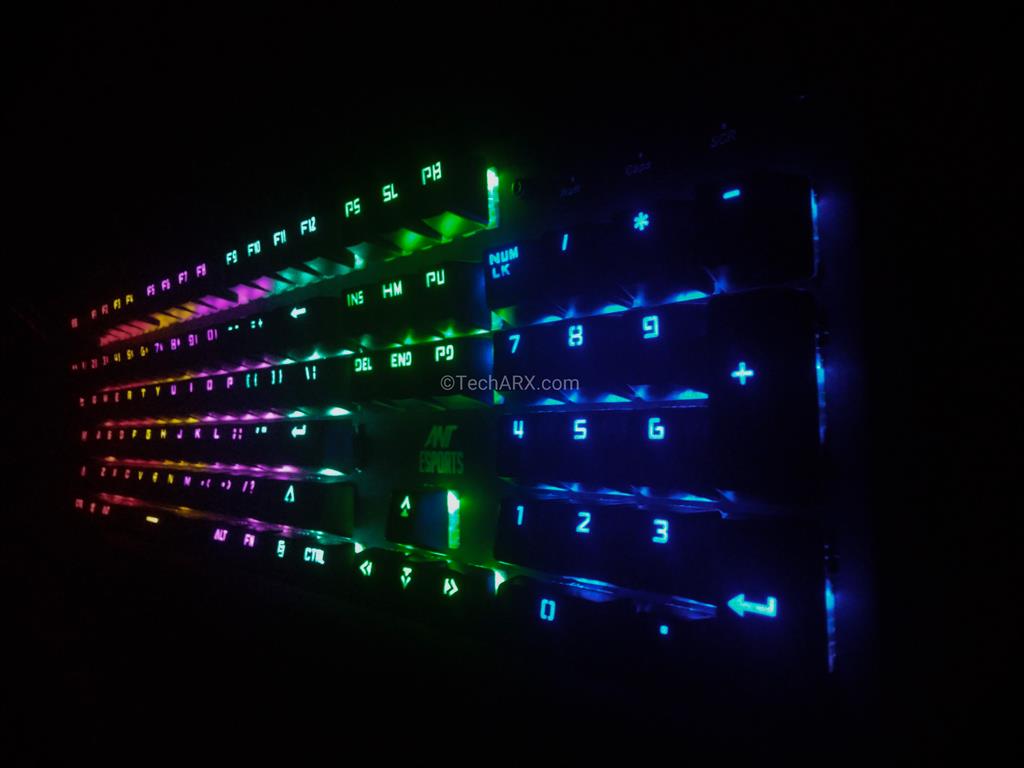 Since Cherry’s patent of mechanical keys expired, the mechanical keyboard arena became open hunting season for anyone to try and make a name for themselves. For the consumers, the benefit was twofold: the consumer had access to different “cherry clones” at a lower price point and the original Cherry MX keys became cheaper. The “cherry clones” also at times became more desirable like the Gaterons or the Zealios switches.

Today, what we have in hand is one such new keyboard with “cherry clone” switches. Presenting the AntEsports MK3000. Ant Esports currently have three keyboards in their portfolio: The MK700 Pro, MK1000 TKL and the MK3000 leading the pack. Before we begin, let’s take a look at the specifications

On the outset, the keyboard is not one of those keyboards that you will find in the low-end market. We have a full size 104 keys keyboard which feels good in the hand. It also has a new kind of “blue” keys from a new entrant in the market (more on this later). The MK3000 also comes with a decent implementation of RGB across the board with properly places LEDs.

The MK3000 has a very utilitarian feel to it. We have an open plate design with raised keys. The brushed metal panel makes it feel like this keyboard can take a beating if needed. The raised keys also make cleaning up very easy among other things if the undesirable spilling happens. The media controls are integrated with the function keys. However, the indicator LEDs for Caps lock and other functions are too small to make an impact. Overall they have gone with an industry-proven design and I cannot fault them in this regard.

The keys on MK3000 are standard ‘blue’ switches with a clear base. The LED’s are infused to the base. However, the keys are manufactured by a new company called “orange”. These Orange keys have no specification listed anywhere on the internet but our industry sources told us they are identical to “outemu” blues and will behave similarly.

Keyboard generally goes through a very rigorous testing regime here Techarx. I use the keyboard as my daily driver for a fortnight. With this particular keyboard, I typed around 50 odd pages of legal and other documents, a generous (and furious) bit of overwatch and normal desktop usage. The keyboard never missed a bit and performed quite nicely for its price. While I may not be a supporter of “blue” keys, I have no problem suggesting this keyboard to anyone is trying to have his/her first mechanical keyboard experience. This won’t break ur bank and will not disappoint you.

The LED implementation is decent for a keyboard of this budget. We have LED’s infused into the keys for better visuals. The whole backlight is six colors predefined by rows. We have 9 dynamic lighting effects such as Breathing, Wave, and Color Cycling modes. Adding to that, the MK3000 has 8 game modes which highlight keys for games like FPS, RTS, car racing, etc. My only gripe is the onboard effects are not enough, ANT Esports could have included a few more effects while refining the currents ones. However, this is only the first version of the product (as I have been told). So, I hope that the next version will have a better implementation of the effects. The keyboard begs for a software solution.

While the purists might scrounge up their noses and the uninformed might be biased against the MK3000. Ant Esports first foray into the budget mechanical keyboard segment is a strong contender and is here to stay.

A sliver from the TechARX for a solid effort.